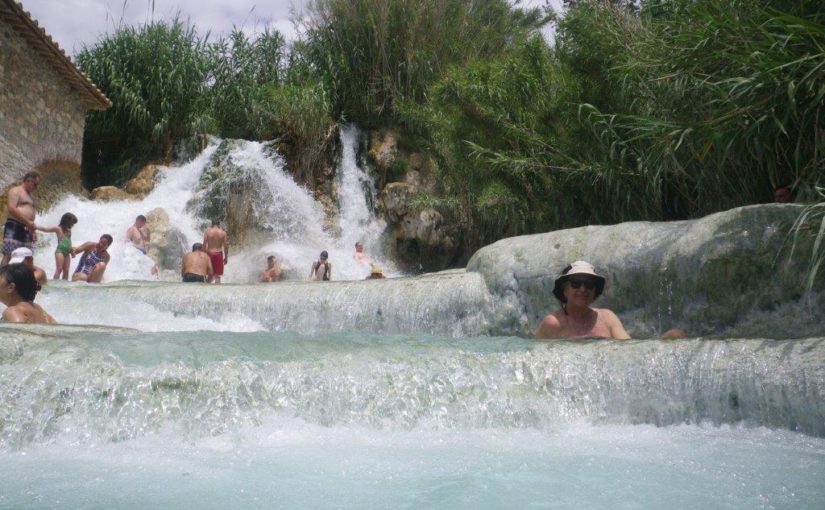 Our walk today began in the small town of San Martino sul Fiora, about half an hour’s drive from the previous night’s acommodation. We had just enjoyed one of the best breakfasts of the trip so far – fresh melon, muesli and yoghurt followed by the most vivid orange eggs I have ever seen. The taste reassured me that it was due to the quality of their feed rather than some chemical additive.


We were dropped off beside a pretty little church, which had a large painting of a knight on horseback saving someone from a presumably terrible fate. Our guide told us that we have finished with via cava for this trip, and that we would be mostly walking on small farm roads.

On our way down a steep hill I spotted some sheep (photo 2). Over the last couple of years we have walked almost two hundred kilometers across the Tuscan countryside, and probably consumed a couple of kilos of delicious peccorino sheep cheese. But we have never seen a single sheep, and it has begun to prey on my mind somewhat. The small flock we saw today is certainly not going to be supplying much milk, but now I know that they do at least exist.

As we passed through the village of Poggio Murella we ran into a greengrocer delivering fruit and veges to the local alimentari, so we purchased some supplies to augment our leftover pizza for lunch. He had some containers of cherries, but he wouldn’t sell less than a kilo so we had to pass up that opportunity.

Near the bottom of the hill on which Saturnia is situated there is a famous hot spring and waterfall in the Mulino River. The town is named after the Roman god Saturn. The legend is that he grew tired of humankind’s constant warfare, and sent down a thunderbolt to create a warm spring that would hopefully pacify us. It seems he failed in this regard.

The spring itself is in a large and flash resort where we planned to visit the next day, but nearby a fast-flowing stream filled with warm water flows down to where it spills over a waterfall into the Gattaia River. Centuries of calcium mineral deposits have created terraces similar to the famous Pink & White Terraces in NZ that were destroyed in the Tarawera Eruption.

The “Cascate del Mulino” is in great condition, with very little development around it. There is an old stone building which used to be a water mill, but no formed paths, fences or warning signs. There were several hundred bathers when we arrived, so we had to wear swimming togs, but we were able to find ourselves a series little basins and pools to ourselves. The bottoms are filled with thousands of smooth round stones about the size of a pea, which were quite comfortable to walk and sit on.

We had left our gear at the entrance to a small cave, so when we got hungry we sat in the entrance enjoying the shade as we ate. Because we both sat on the dirt with our wet pants, we had to go for another swim immediately afterwards so that it didn’t look like we had shit ourselves.

This time I left my sunhat behind and wore my Italian bathing cap (found at a hot pool last year) so that I could go right under the falls. The force of the water on my back gave me quite a pummeling. I started to climb up under the main torrent, but when I found that the rock was quite slippery and the current powerful, I decided that it would be silly to risk injury and made do with a shoulder massage from a smaller waterfall.

The way back to town was along the highway for a while, sometimes on a footpath but sometimes on the edge of the traffic lane. We were very glad to turn off on to a small country lane with no traffic which wound its way up the hill along the path of a Roman road named the Via Clodia to the old town gate of Porta Romana.

Our hotel for the next two nights is just outside of the town, so we walked through without exploring much. This turned out to be a wise move, because we had just settled in to our room when the black clouds we had seen heading our way unleashed a torrential thunderstorm.

In the evening we walked back to the town for a coffee and a wander around before dinner. The town is extremely ancient. It was first occupied by a Pelasgian (ie: pre Greek) civilization, then the Etruscans, then the Romans from 183 BC. In the 6th century AD the town was destroyed by the Lombards and abandoned.

During the middle ages, the smell of sulphur gave life to stories that the devil emerged from the underworld here, and chronicles record conventions of wizards and witches with spells and rituals. By 1300 the town was occupied by outlaws, so the ruling Seinese razed it to the ground.

The city walls were re-built in 1461, but most of what we see today was built in the late 18th century. In the main piazza there are numerous Roman steles with Latin inscriptions. We also saw many spots in the tar-seal road where a square stone indicates the base of a Roman column. It is fascinating for us Kiwis to be in a place that has so many layers of history.

We booked in to an incredibly expensive Michelin Guide listed restaurant and ordered the smallest dry aged angus beef T-bone they could supply. It was delicious, but not really worth the $150 per kilo price tag in my opinion.

After another better than average breakfast, we spent a couple of hours on our computers catching up with correspondence, then walked up to the town to buy supplies for lunch. Our route for the day started by heading south west, then curved back around the base of the hill to end back at the hot springs.

The first thing we noticed was a fountain (or spring) at the side of the road, feeding two stone tanks with several carp living in them. We were also delighted to find water-cress growing, some of which we harvested for our lunch.

We found a shady tree right beside the hot stream and enjoyed our picnic. Our tour operator had booked us a session at the flash Terme di Saturnia, which is a spa and pool complex nearby, so we passed up the opportunity to swim in the stream.

The pools were pleasant, but nowhere near as interesting in the natural (and free) swimming hole down the road. There were numerous warning signs in Italian about something terrible potentially happening if you stayed in longer than 20 minutes, but we ignored them and survived to tell the tale.

There was one rather strange long pool about knee deep with handrails where people were walking up and down. Signs (in English this time as well as Italian) warned that you should not stop in case you were overcome by hydrogen sulphide gas. We did one circuit but didn’t see the attraction.

When we had tried out every pool, we headed back to Saturnia, climbing up another Roman road to the town gate. We
had already looked in the Church of Santa Maria Maddalena, but having learned that it has a famous painting we popped in again on our way to the cafe. The Madonna and Child frescoe by Benvenuto di Giovanni was painted in the 15th century, and to me the figures seemed to have very European features. But you don’t see 400 year old pictures every day so it was worth the detour.

This is the end of our walking tour – tomorrow we catch a train to Pisa.