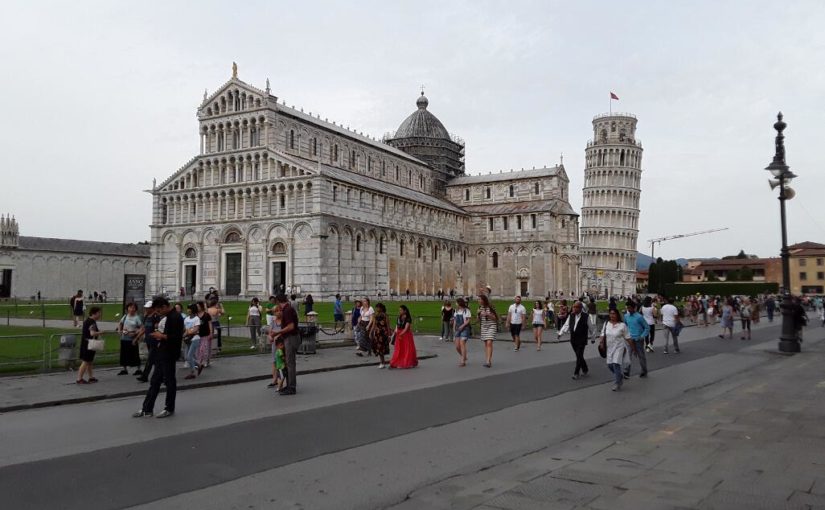 We arrived in Pisa by train just after lunch, and quickly realised that we could have seen most of the sights with only one night’s stay. We spent the afternoon exploring the section of town that doesn’t have the leaning town and the cathedral.

Pisa was bombed fairly heavily in WW2, and quite a few areas look as though they still have not been repaired. Later on, when we saw the magnificent buildings around the Duomo, we could understand that the priorities had to be the buildings that tourists come to see.

Our B&B was very conveniently situated about 15 mins walk from the railway station, and about 10 mins walk from the airport, which is astonishingly close to the city. We set of to explore, and walked along the Arno river until we found the remains of the old medieval walls.

In photo 4, Felicity is standing by a statue of Galileo Galilei, who was one of the founders of modern science. He was born nearby in 1564, and is most famous for discovering that the earth revolves around the sun. This went over very badly with the Catholic Church which believed this was heretical. He was tried by the inquisition, forced to recant, and spent the rest of his life under house arrest.

Photo 5 is the ceiling of the tiny church shown in photo 6. It is hard to make out, but every beam is inlaid with beautiful patterns. The church itself is the Santa Maria della Spina, so called because it once displayed one of the thorns from Jesus’s crown that he wore when crucified. Yeah, right.

By late afternoon we were tired of walking in the heat so we sat in a cafe on the main pedestrian street and drank an aperitif while watching other tourists walk by. There were a lot of African guys walking around selling cheap jewelry and other junk – it is hard to imagine that they can make much of a living. There were also quite a few beggars, although some looked pretty healthy and well-fed to me.

I think our photos got a bit out order, because the images of the tower and cathedral were taken the next afternoon. Before that we decided to head out to the coast for a swim in the Mediterranean, which I have never had a chance to do. When we were travelling to Pisa on the train we were not far from the sea, and it looked very blue and inviting. There is a local bus which took us to Marina di Pisa for a couple of Euro.

The “beach” was far from scenic, and was actually much more packed with people than appears in the photo. The water behind the rocky breakwater is pretty shallow to make it safe for kids, but we still enjoyed a refreshing swim. I was surprised by how cool the water was, given the depth of the water and the hot air temperature. The tiny patch of empty sand behind my right shoulder had a fresh-water shower which was a nice feature.

After our swim, we walked across the road into the nearest of hundreds of small restaurant to have some lunch. To our delight and surprise, we were served one of the best meals of the trip. We haven’t been eating much seafood while walking in the hills, so that was of course the priority.

For starters we shared a tasting plate with about five different types of fish – stuffed mussels, sea-bream, squid cooked in it’s own ink, salmon with sliced fennel bulb, and fresh anchovies with onion. For our mains we had tagliatelle with anchovies and the most wonderful grilled octopus I have ever eaten – almost as good as crayfish.

When we got back to town we were walking back to our hotel when I looked in the window of an electrical supply shop and was astonished to see what looked like components for making terrorist bombs (photo 13). Presumably this display was intended as some kind of joke, but I fail to see the humor. I can just imagine having something like this in your bag when you go through a security check!

Outside all the big Italian train stations, airports and heavily touristed spots like the Leaning Tower there are military guards with an armoured vehicle and sub-machine guns (photo 9). They must get pretty bored standing there all day trying to stay alert for signs of trouble. I hate to think what would happen if they had to fire their weapons with so many people all around.

In the evening we walked to the northern part of town for my first look at the tower. It sure is leaning at what looks like an impossible angle. In 1990 the tower was closed to the public and houses in the potential path were evacuated after another Italian tower collapsed. 70 tons of earth were removed and replaced with concrete, and the tower straightened by nearly half a meter. After over a decade of reconstruction, the tower was opened again in 2001. Engineers reckon it should now be good for another few hundred years.

The buildings around the tower are also very impressive. The main cathedral was stated in 1063, financed by loot brought back from fighting Muslims in Sicily. It was completed about 120 years later, but of course has undergone many restorations since then. Even today, some of the building is covered with scaffolds and we could see workmen high up on the roof making repairs.

We resisted taking the obvious tourist shots of pretending to push the tower over or hold it up. It looks strange seeing hundreds of people in weird poses everywhere if you don’t know what they are doing.

You need to buy tickets to visit the inside of these buildings, and the first booking we could get for the tower was early the next morning. Because of the long spiral staircase, visitor numbers are strictly limited. It was well worth the climb, and we could see from the extensive wear on the stone steps that a lot of people had been there before us.

There are some huge bells at the top, and when I saw that the wooden shafts to which the ropes were once tied were missing, I assumed that they didn’t ring in case of vibrations. Then another tourist looked underneath one of them and pointed out that there are small electric motors driving a hammer, and the shiny spots on the bronze indicates that the must be rung from time to time. I was rather glad they didn’t during our visit!