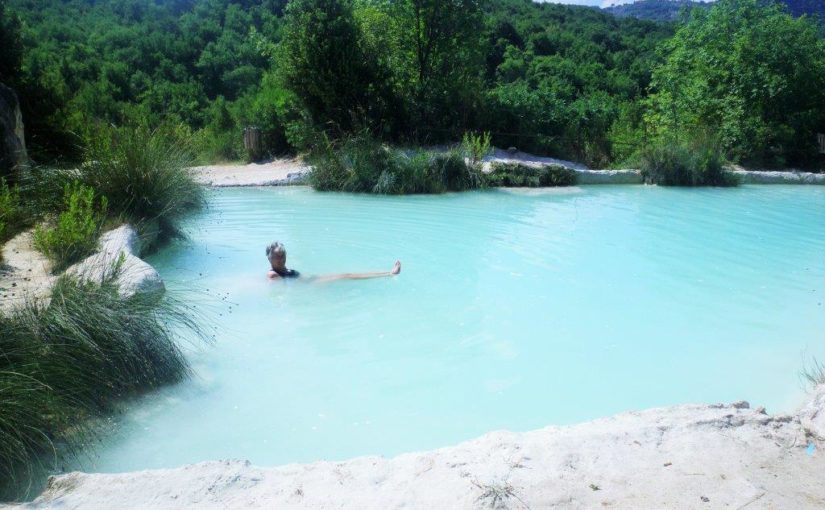 Today’s walk passed through the thermal spa town of Bagno Vignoni, one of the most interesting places in the Orcia Valley. As we walked down towards the river after breakfast we had some fantastic views of Rocca d’Orcia behind us up on top of the hill.

Our route re-joined a section of the Via Francigena pilgrim path, but this time we were heading back towards France. There used to be a Roman bridge over the Orcia, but some time in the past a flood has washed it away. The road now crosses on a modern bridge a bit further down river, but an impressive arched wooden pedestrian bridge has been built on top of the old foundations.

The hot pools at Bagno Vignoni have been in use since Etruscan times, but a major development happened in the 16th century when the Medici family from Florence built a huge pool named “The Baths of St. Catherine” in the centre of the village. A constant flow of water (even now during a drought) bubbles up at 52° C.

As we climbed the hill we could see the thermal area below the town. Just as we reached the top we looked down and saw a pool where bathing is permitted, and which we could have reached by walking along the river bank. Undeterred, we descended again via some steps, and changed into our swimming togs. Just as we arrived I found a cool bathing cap so I wore that too. The water was only about 28°, so bathing in a thermal pool in 35° heat was not as stupid as it sounds.

Another interesting development happened in the 17th century. Because there was a reliable source of water flowing down the cliffs, a series of tunnels were dug into the rock and machinery installed to drive grain mills. Some of the mills were still in use up until 1950, but now everything is pretty derelict because of the calciferous water which covers everything with a white coating. There has been some attempts at restoration so we were able to look inside, but the metal struts supporting the roof don’t look like they will last more than a another decade or two.

Back up the steps we climbed, and looked around the old, now unused bathing pools carved by the Medicis into the solid rock. There used to be a high tower here but it collapsed a century or two ago. In the centre of town we walked around the “Square of sources”, where the water bubbles up from underground. By this time we were ready for lunch, so we purchased a panini at a cafe, and enjoyed a soda made from the local water. Now we are cured both inside and out.

The path took us back down to the banks of the Orcia far below. We inspected the remains of an old road bridge that the Germans destroyed when they were retreating in WW2. Next to it was a swing bridge that had also seen better days. With the river level as low as it is we could ford to the other side easily, but in flood you would have to cross elsewhere.

We then faced a long slog back up the hill, gaining about 300 meters. Fortunately we were mostly in the forest, and there were even a few clouds so the temperature wasn’t as hot as it might have been. Nevertheless we were glad to find a water fountain at the top to refill our cammelbacks.

For most of the final five kilometers we were following a gravel road, made interesting by the fact that it was built a couple of thousand years ago by Romans. We could see the stone paving most of the way, often with worn grooves made by centuries of iron-rimmed wagon wheels.

After a wash and a rest at our hotel, we set off to explore San Quirico d’Orcia, which has existed since Etruscan times (around 700 BC). This town now has about 2,500 people, but the old section inside the stone walls is largely intact. In the past the town has been used by emperors and popes to sign treaties and negotiate alliances. It has always been an important stopping place on the Via Francigena, and the Collegiata church with its three impressive doors (two showing in the final photo) must have been a magnet for pilgrims. All along the main street there are hospices, hostels and inns which serviced the pilgrim trade.

At our end of the town is the modest church of Santa Maria, but it has a magnificent portal that was probably made for the front of Sant’ Antimo Abbey before the monks there ran out of money. There is also a beautiful garden named Horti Leonini, built in the 17th century when the town walls were being repaired after being destroyed by the wars with Sienna. In the mid 20th century the Nazis laid waste to most of it, so the latest restoration is quite recent. The statue in the centre is the 16th century Cosimo III de’ Medici.

The Trattoria Osenna (at Via Dante Alighieri 42) where we had decided to eat dinner didn’t open until 7.00pm, so we wandered up and down the small alleys until we ran out of energy then sat on the steps of a church until it was time. We were shown out the back to a garden area with tables under two huge wisteria vines that completely shaded the whole area. They were very serious about their cooking, warning on the menu that they were not a fast food restaurant, and that it would take time if they were busy. They also said that the only person they trusted to cook the pasta properly was the owner’s grandmother! We left two hours later extremely satisfied.