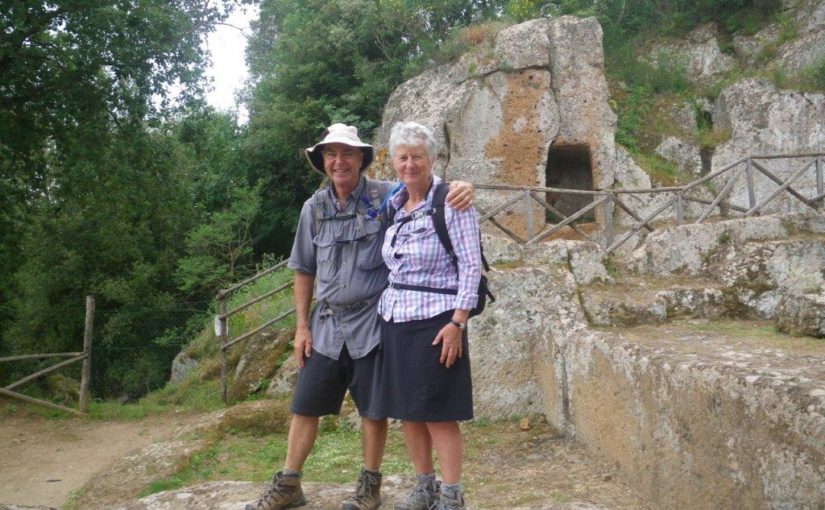 Our route for the day started by heading out of Pitigliano down the now familiar Via Cave di Poggio Cane, but when we reached the highway we turned in a new direction and followed a couple of roads until we reached the beginning of the Via Cave di San Guiseppe.


A short way up this via cave we came to an open area where we explored a small 7th century BC necropolis. Further along we came to a niche high up on the wall with a painting of San Guiseppe (St. Joseph). It looks like one side of the wall has collapsed at some time, because the via cava briefly became a tunnel.

Before we reached the road again we made a detour along a small track to see the ancient Olmo Fountain. Felicity tasted the water and was tempted to replace the town water in her Camelback, but as we seemed to be surrounded by farmland she decided to be cautious.

For the next six kilometers or so we were mostly walking on small tar-sealed back roads. There was an occasional truck or tractor, but it was mostly peaceful. The scenery changes constantly in the Tuscan countryside, so there were always new things to look at. We particularly enjoyed the huge variety of wildflowers.

At one point we were heading down into a valley to cross a river when we rounded a corner and saw a small deer standing on the side of the road. It looked at us for about 30 seconds – not long enough to get the camera out – then bounded away into the forest.

We knew we were getting pretty close to our destination, so we began looking for a shady spot to eat lunch. Beside a stone wall where a culvert ran under the road, Felicity spotted some overgrown stone steps leading down to the creek.

The creek was emerging from a narrow gorge, and around the first bend we found a pool (photo 4) that was just deep enough for us to take turns plunging into the cool, refreshing water. It wasn’t anywhere near as muddy before we both bathed in it.

The pool itself was out of sight of the road, but we had just got our clothes on again when a large truck pulled up at the side of the bridge and the driver got out to have a stretch and a look down at the stream where we had been naked moments before. We gave him a friendly wave and finished tying our boots.

We then noticed that beside the stream there was a via cava that looked like nobody used. We walked up a little way and found a comfortable spot on one side where we could eat lunch and watch the creek below. Although via cava have stopped being a novelty, we thought we may as well keep exploring, because it was still early afternoon and we knew we didn’t have far to go.

It was rather exciting walking up the obviously un-used track, fantasizing that we might find an undiscovered Etruscan tomb filled with valuable artifacts. We did see about a dozen tombs, but they all had numbers on the outside and there was an old wooden fence indicating that plenty of people had used it in the past.

When we returned to the bridge, the truck driver was asleep in his cab. We walked back up the stone steps and along the road for only a couple of hundred meters before we saw the ruins of the Rocca Aldobrandesca ahead. This was once a fortress guarding the town of Sovana, and while there has probably been a fort of some kind here since Etruscan times, the current structure dates back to 1572.

Sovana is a very small hill town, with a population of around 150 people. Our hotel looks quite modest from the street, but when we walked through the building and out the back we discovered extensive formal gardens, and a marble swimming pool. It even has its own small Etruscan necropolis.

There are foundations of an ancient building visible outside, under a small metal roof to protect them from erosion. They continue inside the building, and sections of the floor are glass so that you can look down and see the stones below.

A couple of kilometers further on from the town is one of the largest and most impressive Etruscan Necropolis in the Citta del Tuffo archaeological park. We made the mistake of asking directions from our hotel manager, at the cost of several kilometers extra walking, mostly along a busy highway. Trying to be helpful, he worked out our route using Google maps, which doesn’t show a staircase leading down the hill just behind the hotel.

The highway is cut deep into the tuff rock, exposing several tombs and an old dovecot where someone once raised pigeons. It then passes through a tunnel for a couple of hundred meters, which would have been more fun if we weren’t sharing it with speeding vehicles.

We had to pay a small amount to enter the necropolis, but it was well worth the expense. The Tomba Ildebranda (named after a Pope) is an enormous temple cut into the rock in the 3rd century BC. It had multiple levels and a six-column portico with staircases on each side. The tomb was “found” in 1925, but grave robbers had visited long before that so there were no valuables.

Nearby is the Tomba dei Demoni Alati or “Tomb of the Winged Demons”, which was only discovered in 2004. A landslide several hundred years ago covered the area with soil, protecting the decorations surrounding the tomb. Archaeological excavations uncovered some amazing sculptures of mermaids with wings that once stood either side of the burial chamber. There were also a couple of lions, and a reclining statue of the deceased. There is just enough remaining plaster to see that it was once brightly coloured.

The way back to the hotel up the stairs was much shorter. We arrived at the domo (cathedral), and considered paying the entrance fee to look inside, but as it was a relatively modern building – only a thousand years old – we made do with a quick look around the outside. At the bottom of the right side of the door (photo 15) is another image of a mermaid, which is definitely not a Christian motif.

Back at the hotel, we enjoyed a swim in their pool, followed by a brief walk around the grounds. There seem to be only a few other guests staying at the moment. On one of the terraces we saw a snake slithering along and disappearing into a pipe. Felicity suggested that I stick my hand in to see if it would come out and attack, but its length was around the half meter mark, the same as the poisonous viper, so you don’t get to see a photo.

The “helpful” hotel clerk had told us that the hotel-owned restaurant in the main piazza would give us a 10% discount because we are guests. As we were heading out the door for dinner, his replacement told us that the restaurant was closed but he could recommend another. This turned out to be closed as well, and we soon discovered that there was only one other decent place in the small town, which as you might have guessed by now was also closed.

We had to resort to eating pizza at a bar, which was a bit if a disappointment because I reckon the pizzas we make ourselves at home are way better. The local wine was not the greatest either, although I like to think I have spent the day walking past the vineyards where the grapes were grown.

One thought on “Sovana”