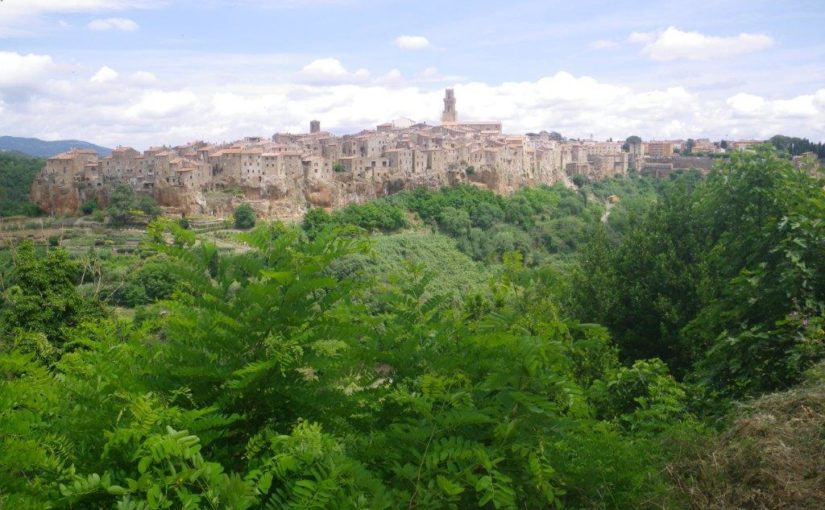 Today’s walk was mercifully quite short, as we are spending a second night in Pitigliano. The town has a population of about 4000 people, and although it was once another Etruscan settlement its name dates back to Roman times.


Almost as soon as we arrived at the bottom of a stone stairway leading out of town, we came to a junction of two via cava. We followed the path down the Via Cava di Poggio Cane (dog hill) to the Meleta Creek, and managed to cross some stepping stones without getting wet feet.

The trail then led up the Via Cava di Frattenuti (probably someone’s name), then we continued through the shady trees until we reached an asphalt road. For the next five or six kilometers we were walking mostly on small back-roads through farmland. It was rather hot out in the open, but the countryside is very attractive.

Because it is still early summer there are masses of wildflowers in the ditches and fields. We also saw numerous iridescent green lizards scampering away as we approached. After a while we encountered the highway again which wasn’t much fun to walk on, but we soon reached the church of Madonna delle Grazie where another via cava heads back down towards the Meleta Creek.

We were amused to see a little wine shop entirely in a cave right next to the highway. From here we had a great view of Pitigliano across the valley. The Via Cava della Madonna delle Grazie is particularly deep, and the walls towered over us as we wound our way down the cliff.

At the bridge over the creek we looked for a way down to the water in the hope that we could have a swim. There is a house which used to be a watermill, although there didn’t seem to be a huge flow of water. After some rather painful encounters with stinging nettles and failing to find any dock to ease the pain, we gave up on the idea of a swim and sat on the grass for a picnic where we could at least see and hear the creek below.

Across a road we entered another section of the Via Cava di Poggio Cani which led us back to the town. We didn’t go up the stone steps though, and instead followed a path around the base of the walls.

We came across a guy looking at his phone and muttering crossly to himself, and we figured that although he was probably only 10 meters or so from his intended destination on the map, he should have been at the top of the cliff – 60 meters or so above us. When we reached the top of a steep staircase we saw that he had found the people he was looking for.

I could see that there has been quite a bit of modern engineering done in recent times in an effort to prevent buildings at the top of the cliff falling off. Holes have been drilled into the rock in numerous places and steel reinforcing rods inserted, followed by injections of cement.

There are many properties for sale throughout the town – I presume the ones on the outside are the cheapest, even though they would have the best views. This is the sort of town that could be totally devastated by an earthquake, so I hope things stay stable for the next 24 hours!

We began exploring, and soon noticed an interesting red/orange disk down one of the alleys. It turned out to be a artwork made of felt, and when we looked closer we found a gallery with an artist that specialised in this medium. She showed us a range of scarves with patches of coloured felt that she told us were embedded permanently into silk.

Pitigliano is famous for its Jewish population, which was established in 1556 after an invitation from the ruling Orsini Count. Fifty years later control passed to the Medici family who were also happy to host a Jewish population, probably because they could borrow money from them. A synagogue was built in 1598, and a ghetto (or Jewish Quarter) was instituted in 1622. By the 19th Century about quarter of the population was Jewish, and the community became known as “Little Jerusalem”.

When Italy was finally unified in 1861 Jews could live where they liked, and the Jewish population of Pitigliano began to decline. There was some persecution during WW2 although their catholic neighbors hid many of them in the surrounding countryside for protection. After the war however, the number of adult male Jews fell below the minimum of ten required to conduct worship, and the synagogue became defunct. In the 1960s the building collapsed in a landslide, but it was rebuilt in 1995 by the local council and now is part of a museum.

We spent a couple of hours looking around – in the basement several old Etruscan tombs and cisterns were adapted to meet the needs of the Jewish community. One room had ritual baths, and another was used as a cellar for kosher wine. There was also a dye-works, a kosher butcher, and a special bakery which was only used for making unleavened bread for Passover celebrations.

I had to wear my beanie when visiting the synagogue, because men are not allowed to have their heads uncovered and it looks more like a kippah than my sun-hat (which would have been acceptable). Felicity had to borrow a shawl to cover her bare arms. It was a fascinating visit, and not at all what we expected to be seeing in central Italy.

I was about to publish this post when I noticed that it was 8.00 PM and time for dinner. We decided to go to a trattoria around the corner from our host’s restaurant, and walked the long way around the block to avoid his establishment where we had eaten the night before. We were sitting out on the street, just beginning to eat our meal when the aforementioned host walked past, wishing us a Buonasera as he went.

I’m not as tired as last night, but the bed looks pretty inviting so that’s all for today.

One thought on “Pitigliano”