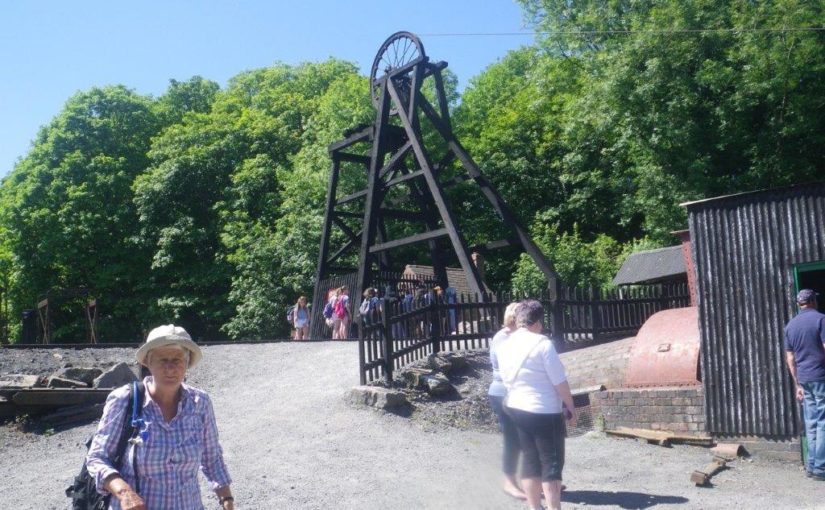 One of Felicity’s colleagues told us that we shouldn’t miss the Black Country Living Museum, and it turned out to be excellent advice. We took a local train to Tipton, and walked for about half an hour to the museum entrance.


The first exhibits we looked at were a collection of old motor vehicles and motor bikes, most of which were made in the vicinity. At the beginning of the 20th century, the Midlands was one of the world’s main manufacturing centers for cars, trucks, buses and motorcycles. We saw almost forgotten brands like Sunbeam, AJS and even an REO Speed Wagon – the ancestor of the pickup truck. I also noticed a couple of double-decker trolly buses.

But the main attraction is that the site celebrates the creation of first industrial landscape in the world. This probably wasn’t so great for the inhabitants of the time, apart from the employment opportunities, but on a fine summer’s day in the 21st century it is a rather attractive place.

The 26 acre site once had 42 coal mine shafts, of which two are still accessible. Nearby in the 1620s is where Dud Dudley developed the art of smelting iron using coke made from coal instead of charcoal made from wood which was becoming scarce.

Millions of years ago, this area of the UK was a shallow sea, and tons of shells, coral and invertebrate creatures gradually built up a thick layer of limestone on the sea bed. Some time later, when the sea had receded, early plants and trees made another layer of carbon which transformed into coal.

Iron has been made in small quantities since as early as 2,200 BC but in 1830 Joseph Hall opened a factory in Tipton which used the puddling process. Most Victorian wrought iron, including the Eiffel Tower, was made using this method. Smelting used quicklime as a flux, and this was produced by burning limestone in huge kilns. Felicity is standing inside one in photo 10.

By the late 19th century, the Earl of Dudley had become one of the richest men in England on account of owning all the land on which the coal and limestone was mined. Later in the day, as we were walking back to the train station, we passed a large factory complex owned by Thomas Dudley Limited which makes iron castings and bathroom products.

We were told that there are regular tours going down inside one of the old coal mines, so we rushed over and were just in time to join a group. We had to wear hard-hats which was just as well because in places the roof was very low and most of us bumped our heads from time to time.

Up until 1842, children as young as five worked inside mines in pitch black, opening and shutting doors which controlled the flow of air. British coal mines often contained explosive methane gas, and there was a huge loss of life each year from explosions, cave-ins and accidentally “drapping” down deep shafts. Our guide had a very broad accent.

When children got a little older, they could get a job leading an “oss”. These pit ponies lived underground for 364 days a year, with a day’s holiday outside at Christmas. Adults who got the highest pay had the most dangerous jobs, either undercutting huge drifts of coal using temporary props to hold it up, or climbing ladders high up the face to drill holes. At numerous places inside the mine there were mannequins engaged in various mining operations, with a recorded voice explaining what they were doing.

Because it was hot working underground, miners usually wore minimal clothing. The Mines Act 1842 was passed when the Victorian public learned that girls and women were wearing trousers and working bare-breasted in the presence of naked boys and men, which “made girls unsuitable for marriage and unfit to be mothers”. From that date on, women and children under ten were banned from mining. This meant that female miners had to cut off their hair and dress as men, which was often only revealed when there was an accident.

Another technological advance made in Tipton was the development of the atmospheric engine by Thomas Newcomen in 1712. This was a huge machine driven by steam which could pump large quantities of water out of mines. This was a constant problem in the black country area, where the water table is quite high. There were hundreds of these steam engines built in the 18th century. Unfortunately the full size working replica at the museum (photo 13) was temporarily out of action, so we couldn’t see it in operation.

We made another trip underground after a lunch break. This time we took an electric-powered canal boat into the Dudley Tunnel system. The main tunnel is over 2.5 km long and was originally built in 1775 to transport limestone from underground quarries. It opens out into huge caverns which can now be used for events and weddings. There are also light shows and videos showing how the geology of the area developed.

Back at the museum, we visited numerous 19th century factories, houses and shops. We watched a guy making nails by hand, saw a foundry where they cast anchors, a factory for making chain, and what used to be one of the British Commonwealth’s largest steel trap manufacturers. This kind of leg trap was very cruel, because the animal would be badly injured but not killed. The largest trap in photo 12 was for bears. We saw dozens of stencils on the wall for painting destinations on the packing crates – one of them was Wellington.

One of the hazards of coal mining is that the ground above often shifted when the coal below was removed. If you look at the rafters of the house in photo 11 you can see the the effect of this. Some of the worker’s cottages were pretty basic, but others were reasonably comfortable as long as you can do without running water or electricity.

Our final stop was at a Victorian fairground. When she was a little girl, Felicity saw a picture of a helter-skelter in a book, and she finally fulfilled her ambition to ride down one. Her descent on a couple of coir mats was very fast, and I was lucky to catch the shot.

By 4.30 we were exhausted and looked forward to getting home and putting our feet up. For a bit of variety we walked to the Dudley Port railway station. When we arrived however, there was a sign informing us that all trains were cancelled, so what would have been a comfortable 20 min train ride turned into over two hours on a hot and crowded bus. This only took us to the outskirts of Birmingham, so we had to catch another bus into the city centre.

As we neared home, we realised it was far to late for our normal coffee, so we instead called in at the local BrewDog pub for a refreshing IPA (India Pale Ale). We chose the draft “Hazy Jane” from the top of the menu, which is 7.2% alcohol and tasted fantastic. Morale was much improved! Definitely the best beer of the trip so far, but it put paid to my good intentions of writing this blog.