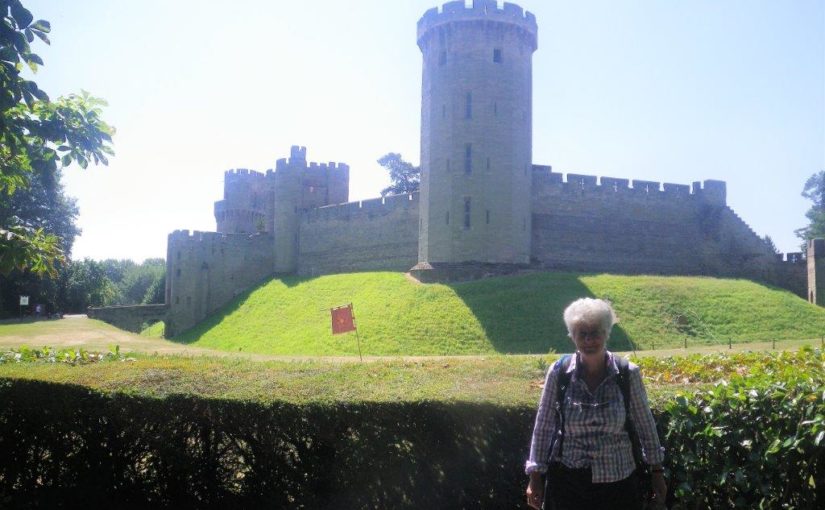 Another town we were told we shouldn’t miss is Warwick, on the banks of the Avon River about 15 km upstream of Stratford-upon-Avon. It is about a 30 minute train ride from Birmingham so we arrived by mid-morning yesterday.

There has been a settlement here since Neolithic times, and the remains of a large Roman barn was found last year during development of Warwick School for boys, which is the fifth oldest surviving school in England.

The town first became significant when the daughter of Alfred the Great built a fort in 914 to help defend the kingdom of Mercia from the Danes. Lady Ethelfleda chose the site because it was near to an important Roman road named Fosse Way, and there was a natural hill on the banks of the Avon.

The river was also used for transport, but it was never really navigable much beyond Stratford. In 1050 the Danes invaded and burned most of Warwick.

The next development came in 1068 when William the Conqueror founded Warwick Castle on the site of the old Anglo-Saxon fort. The town was in a strategic position near the center of the country, from where troops could be dispatched to put down any rebellion. The Normans were clearly planning for the long term, because they quickly built a network of castles throughout their territory.

At first they were of motte-and-bailey design (the main “keep” on top of a natural or artificial mound), next to a fortified enclosure. Later on they developed the characteristic square towers built of stone.

In the middle ages Warwick was surrounded by a town wall, which is mostly gone now, except for the massive East and West gates (photo 15). Interestingly, many of the oldest buildings are outside the gates, because a devastating fire destroyed a large part of the town in 1694. From that time on, thatch roofs were banned.

We stopped at the information center in town to pick up a map of the town trail, and purchased an entry ticket for Warwick Castle at the same time. For some reason the tickets are significantly cheaper that at the Castle gate, and you get to bypass the long queue. We started following the trail, but since stop 3 was right outside the castle we decided to see that first.

I have to say that this is one of the most attractive castles we have visited, despite the presence of thousands of excited schoolchildren. Felicity convinced me to pose in the stocks, which had a sign saying “Thief” under my head. Fortunately there were no rotten vegetables available for people to throw.

When we climbed to the top of the original fortress on the cliff overlooking the river, we heard an announcer encouraging a crowd of kids to count down from ten then shout “loose”, upon which command a full size Trebuchet or siege engine would be fired. I got the camera out just in time, and caught the stone projectile flying through the air. I enhanced photo 4 with a red circle so you can see where it is – it went right across the whole photo and landed somewhere in the trees on the right. Not a good spot for a picnic!

There was a display of hunting birds called Flight of The Eagles scheduled for 1.00 pm, so we found ouselves a front row seat and ate our lunch while we waited. It was extremely hot out in the sun with no shade, but we got a great view. The huge birds flew about a meter above our heads, causing screams of terror from some of the smaller children. Because they are such heavy birds, they rely on thermal updrafts to gain height so because there was little wind they didn’t fly much above the castle ramparts. The bird in photo 6 is actually a buzzard.

We spent the next hour or so climbing up and down narrow spiral staircases exploring the towers and battlements. From the top of Guy’s Tower where the flag is flying we could see way out across the county of Warwickshire.

Next we explored the basement area of the castle, where there were numerous displays of weaponry and other military equipment. There were so many wars and battles involving the castle that I couldn’t really keep track.

In the 1480s, King Richard III of England undertook significant renovations, but 70 years later when it was granted to John Dudley the 2nd Earl of Warwick he complained that it was not fit for habitation. When Ambrose Dudley died in 1590 without leaving an heir, the Earldom became extinct for the second time. By then the castle was in even worse shape.

The estate was given to Sir Fulke Greville by James I in 1604. During the English Civil War in the 1650s it was an important stronghold of the Parliamentarians or “roundheads”. They withstood a two week siege by the Royalist forces, and it was subsequently used to hold prisoners. This was probably the last time the castle was used in a military capacity.

During the 18th century the main section of the castle was modernised and turned into a stately home. In addition, Lancelot “Capability” Brown was brought in to landscape the extensive grounds. As we toured the banquet halls, staterooms and bedchambers, we saw displays commemorating visits by royalty and other important people.

By mid afternoon we realised we had better get on with the town circuit. We didn’t have time or energy to explore the inside of the charming Lord Leycester Hospital (photos 9 & 10). This exterior of this building illustrates what genuine Tudor architecture looks like – the white panels and black beams is a Victorian fashion. The “hospital” was never intended for sick people, but instead to house disabled ex-soldiers and their wives. It is still used for this purpose 600 years after it was built.

The street in photo 11 is a collection of Georgian houses built after the great fire. It was intended that they all be faced with brick, but the builders purchased dodgy supplies from itinerant brick makers, so many of the houses had to be plastered over.

Our final stop was Collegiate Church of St Mary, founded in 1123. The fire destroyed the medieval tower and the nave, but the chancel (section surrounding the alter) was saved by the stone vault and some heroic fire-fighting. The church was re-built in 1704 with a Gothic design.

We spent most of our visit down in the vaults. On display there is the tumbrel (trolly) of a medieval ducking stool (photos 12 & 13). According to the sign, this was used to punish dishonest bakers or brewers of adulterated beer. It was also used for scolding wives, women of immoral character or suspected of witchcraft, and even quarrelsome married couples. This device went out of fashion over 200 years ago, and the tumbrel has been stored in the crypt ever since.

The final photo was taken as we were about to leave town via the Eastgate. The red letterbox is one of the very first ever made in this design in 1856. There are only eight like this remaining in use throughout England. It has a vertical slot to insert letters, and when this was discovered to allow rain to penetrate it was changed to the horizontal slot that has been used ever since.

One thought on “Warwick”