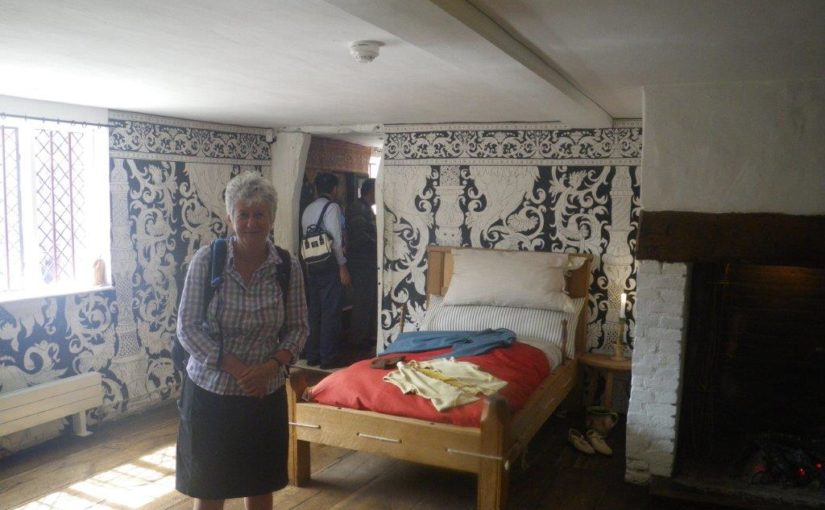 Since it is only half an hour’s train ride from Birmingham, we went to visit the birthplace of William Shakespeare today. The photo above is his actual childhood bedroom. As there is a £5 per person walking tour we decided to start with that and learn a bit about the town.


The first interesting fact we learned is that Avon is the Celtic word for “river”, so calling it the River Avon is a tautological error. There is evidence of an iron-age settlement on the other side of the Avon from the current town, but the “strat’ in the name refers not to the river, but to a Roman road/street which ran from nearby Fosse Way to the ford.

The settlement was invaded and settled by Anglo-Saxons in the 7th century, but its main development occurred in 1196 when King Richard I granted the local landowner a charter to hold a regular market. The growing town was laid out on a grid system, and we met our guide at the end of Sheep Street, which indicates the importance of lamb and wool to the medieval economy.

In 1564 William Shakespeare was born into a wealthy family. His father John made his fortune from tanning leather, then from manufacturing fine leather gloves. The leather came from sheep, deer, squirrels and even dog.

One of the theories about why William went to London was that he was caught poaching deer, which in those days all belonged to the king. John Shakespeare served on the town council, and eventually became a bailiff, with his own coat of arms.

Because of his father’s status, William was given a free and comprehensive education at the local grammar school (photo 2). He was taught Greek and Latin by academics from nearby Oxford University, and had access to a well-stocked library.

When he was 18, he married Anne Hathaway who was 26 and three months pregnant. Our guide Barbara told us that in those days a woman of that age was considered just about “on-the-shelf”, as most were married by the end of their teenage years. It was not considered proper to get pregnant out of wedlock, so it was probable it was a “crossbow” wedding (shotguns hadn’t been invented yet).

Susanna Shakespeare was born in 1583, and went on to marry a doctor named John Hall. William approved of the mariage, and left Susanna most of his money. Two years later Anne gave birth to twins; Judith and Hamnet. The boy died at the age of 11, much to his father’s distress.

Judith married a Thomas Quiney at the age of 31, presumably out of desperation, given her age. He was the black sheep of his family, and caused a scandal when his previous lover gave birth to a son only a month after the wedding. He was also rather too keen on alcohol, and Judith received only £150 and a silver bowl in William’s will.

Susanna produced a granddaughter who remained childless, and all of Judith’s children died, so there are no legitimate descendants in William’s family line.

There may however have been an illegitimate son because William used to stay regularly at an inn in Oxford when he was travelling to and from London. The innkeeper’s wife Jane Davenant gave birth to a son named Will in 1606, and Shakespeare took the role of God-father. Will Davenant became a very successful playwright, theater manager and poet, and was subsequently knighted by Charles II.

Some time after the birth of his twins, William left his wife and children living in his father’s home and disappeared, possibly to escape punishment for the deer poaching incident. There is no record of the next period, which has become known to historians as the “lost years”.

In 1592 Shakespeare re-appeared in London as an established playwright and actor, and his successful career was underway. He became very wealthy and in 1597 was able to purchase the New House – the largest property in the Stratford-upon-Avon.

Before his death in 1616 he wrote at least 37 plays, two volumes of poetry and over 150 sonnets. It is estimated that he introduced over 1,700 original words to the English language, as well as dozens of phrases still in common use today.

Our tour took us to the Holy Trinity Church where Shakespeare was baptised, and eventually buried. He was obviously afraid of grave robbers, because not only did he manage to get interred inside the building instead of in the churchyard, but he had a curse engraved on his tombstone instead of his name;

“Good friend, for Jesus’ sake forbear, to dig the dust enclosed here. Blessed be the man that spares these stones, And cursed be he that moves my bones.”

Despite this warning, a recent investigation shows that his fears were justified. In 2016, a team of scientists gained permission to scan the grave with advanced ground penetrating radar technology in the course of making a TV documentary. They discovered to their surprise that the skull is missing.

Our tour guide then told us some interesting stories which should probably be taken with a grain of salt. She said one of the reasons Shakespeare arranged to be buried inside the church was because when graveyards filled up the plots were recycled by digging up all the bodies, piling the bones into a big pile then burning them. This is the origin of the word “bonfire“.

During this process it was sometimes observed that there were scratch marks on the inside of coffin lids, suggesting that the occupant may not have actually been quite as dead as the doctor thought. Apparently people could arrange to have a string tied around their little finger running to the surface and attached to a bell, so that if necessary they could raise the alarm and be dug up again. This is the origin of the phrase: “saved by the bell”.

The person who was employed to listen for possible alarms at night worked “the graveyard shift”. Supposedly one man was actually rescued in this way, and was subsequently seen in drinking in the local pub by a grieving friend, who was shocked to see someone who looked exactly like the deceased. He was described as a “dead ringer”. As I have already mentioned, I am a bit skeptical about these tales, but exploiting people’s fears of being buried alive could have been a profitable scam.

When we visited Ludlow a couple of days ago, we were surprised to see that many of the Tudor buildings had plaster sections coloured yellowish brown instead of white, and the wooden beams left unpainted. We learned from Barbara that this was normal, and that the fashion of painted black beams with whitewashed plaster dates back only to Victorian times.

We also learned that many of the supposedly Tudor buildings in Stratford-upon-Avon are fake, and that the original buildings had brick frontages. We learned to identify the genuine examples by the absence of straight lines or level floors.

There is an interesting building called the Old Bank, built in 1883 with 15 terracotta panels depicting scenes from Shakespeare’s plays. Appropriately, the Merchant of Venice is over the door.

After the tour, we walked down to the river bank to eat our lunch. A very aggressive and large swan came right up to me and threatened to snatch my sandwich. When I tried to shoo it away is hissed menacingly at me and lunged at my bare leg.

I was forced to give it a gentle kick with my boot to let it know it was dealing with an apex predator, but as I anticipated a woman rushed up saying “Don’t hurt it – just give me a bit of your bread and I’ll feed it”. I told her that feeding wild animals is a dumb idea, as it just teaches them to harass people, but I soon noticed lots of other tourists throwing food to them.

We walked back to the Shakespeare family home and paid the rather steep NZ$30.00 each to enter the complex. There was an interesting video featuring many small snippets of his plays, but the best part was the actual house he was borne in, which has been recreated inside as faithfully as possible to the way it was in the late 16th century.

The party of 50 Chinese tourists that arrived just after us undermined the impact somewhat, but their guide hustled them along and they soon left us to look around at a more leisurely pace.

In John Shakespeare’s workshop I was allowed to try on a pair of leather gloves, and I was very impressed with how comfortable they were. He used to trim them with fur for the nobility (commoners were not allowed to wear fur of any description), and he fixed jewels and silver decorations to the cuffs for those who wanted to display their wealth.

It was an interesting day, but the town is so filled with masses of tourists it is a bit spoiled. Every second business seems to have some reference to one of the popular plays, and every building remotely connected to the Shakespeare family charges a fee to enter. It would have been nice to have seen a play, but they are heavily booked and are currently doing popular plays that we have seen multiple times.

One of the few attractions which has no connection, and which currently doesn’t charge a fee because it is closed, is the formerly named Ancient House in the High Street (photo 5). It is now called the Harvard House, because the it was built in 1596 by the grandfather of John Harvard, benefactor of Harvard University. In the early 20th century it was purchased by an American millionaire and given to the University.