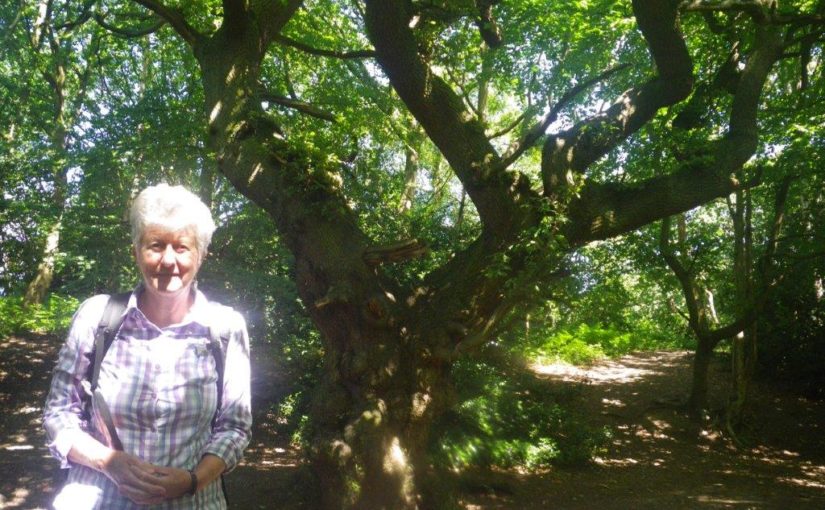 Ten points for any reader who can guess the connection between these two areas of Birmingham without scrolling down the page. Felicity had a 10 am appointment in Moseley, so we decided to catch the bus instead of walking and arriving hot and sweaty. We wondered how we would pay the fare, and were impressed to discover that any credit or debit card can just be touched on the card reader. This technology is coming to NZ over the next few years.


My interest in accompanying her was so that we could visit Moseley Bog. Most of this area was a council landfill site from 1930 to 1960, when it was leveled off and converted to playing field. Because it was always damp, there was a proposal in the 1980s to develop the area for housing, resulting in a huge campaign to “Save our Bog”. Plans were abandoned, the site was declared a nature reserve, and it was allowed to revert to woodland.

A small stream named Coldpath Brook flows through the reserve, either side of which are some “burnt mounds” which I was keen to see. These are an archaeological feature consisting of a mound of shattered stones and charcoal, which in this case are believed to mark the spot where a kind of sweat-lodge or sauna was constructed back in the Bronze age (around 3,000 years ago). The Moseley Bog mounds are Scheduled Ancient Monuments, which means they are protected from any alteration.

We only found them at the side of the track because there was a sign, and to be honest, they were rather underwhelming. Possibly the most interesting feature was a modern retaining wall made of woven willow, which is trying to stop the brook from eroding the biggest mound.

There was another reason for our visit however. Moseley was the childhood home of J. R. R. Tolkien, and the Dell (as it was known in his day) provided inspiration for the forests in his books. He used to climb and draw the ancient oak trees, a few of which still survive. Sadly, none of the ones we inspected talked to us.

A short walk through a 1970’s era housing estate brought us to the Sarehole Mill Museum. This old watermill and pond is said to have provided the inspiration for Hobbiton. Unfortunately it is closed on Mondays, but when we looked over the fence the entire pond was covered in green scum (photo 4) so we weren’t terribly disappointed.

The mill is on the River Cole, and there was an inviting path along the bank through woodland in both directions. We headed north, and after an hour or so ended up back at Spark Brook near where we had been a couple of days ago. We were a bit shocked by the amount of rubbish in the stream and surrounding woods, particularly since this area has the highest unemployment rates in the UK. There is a facility called Ackers Adventure where we watched schoolkids in harnesses climbing up a concrete wall while we ate our lunch.

The surroundings were pretty industrial by this time, so we decided to jump on a train and head back to the centre of town. We stocked up on fresh veges at the market, then called in at our apartment to drop them off and drink a cup of tea.

For the second part of our day’s activity we walked west for about half an hour until we arrived at Edgbaston. Here there is a 29 meter high tower named Perrott’s Folly that was built in 1758 by a local landowner.

Theories about why he did this include: he wanted to survey his land and entertain guests, he liked hunting but was lazy and wanted to see where the deer were to minimise the chase, or because he wanted to see his wife’s grave 15 miles away. On Saturday, Rob our tour guide pointed out the tower from the top of the library, and made the additional suggestion that Perrott’s wife may have had a tenancy to be unfaithful and he wanted to keep an eye on her comings and goings.

From 1884 to 1979 the tower was used as a weather recording station, but since this ceased the tower’s ownership has changed hands several times. There have been several short-lived attempts to open it to the public, but these have failed due to lack of funds. It isn’t particularly impressive, but our visit was because Tolkien moved here when he was twelve, after his mother died.

There is another tower nearby at the Edgbaston Water Works, and the two of them supposedly provided the inspiration for the Twin Towers in Lord of the Rings. All I can say is that Peter Jackson’s towers are way more impressive!

It took us some time walking through suburban streets, but eventually we found one of three entrances to the Edgbaston Reservoir. This is a man-made lake behind a dam, and is used to provide water for the canal system. The sun was shining and I was carrying my togs, but signs warned that the water was polluted and that contact should be avoided.

We did enjoy a lovely 3 km walk around the perimeter, watching squirrels scampering up trees and birds of various kinds chirping in the trees and paddling on the water. The reservoir is stocked with fish, and we saw a couple of guys on the bank trying to catch some. Most freshwater fishing in England is for sport rather than for food, and they usually get thrown back.

It was only a few hundred meters from the reservoir to the canal system, so we walked the rest of the way home on the towpath. For our dinner tonight, Felicity is cooking the best sausages in the world, according to “Mick the Meat” down at the Bullring Market.

3 thoughts on “Moseley and Edgbaston”