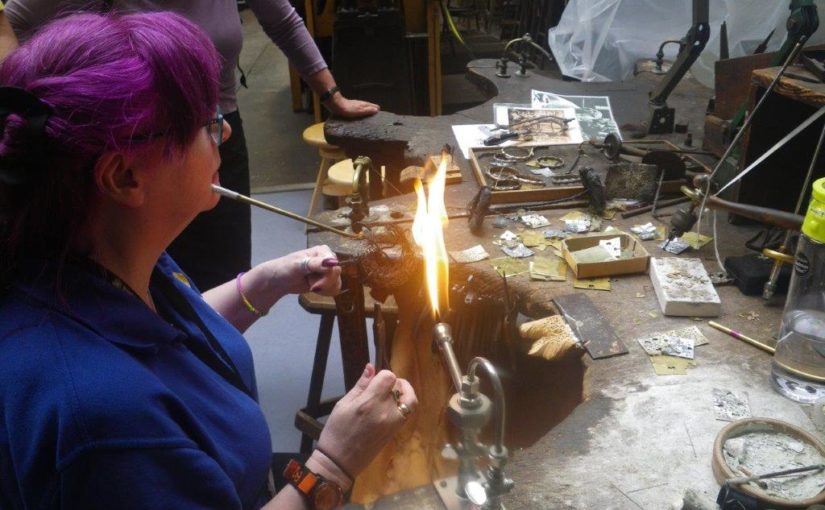 About half an hour’s walk along the canal from our apartment is an area of Birmingham known as the Jewellery Quarter. We walked around it soon after we arrived, but did not visit the Museum of the Jewellery Quarter when we saw it was going to cost us NZ $15 each. After reading some reviews we realised this may have been a mistake, so after a morning spent working on our computers, we walked over to check it out.


On our previous visit we had noticed a Jamaican Restaurant in the vicinity, so we decided to treat ourselves to lunch while waiting for our tour to start. Many years ago, Felicity used to live in Jamaica, so she was keen to taste some traditional food which you don’t see in NZ. I enjoyed the mutton curry and the akee & saltfish, but the tinned akee (a kind of fruit) had a delicate taste that was a bit overwhelmed by the other ingredients.

The museum is located in the old Smith & Pepper factory. When they stopped trading in 1981 after 80 years they just went home on a Friday afternoon and left the factory exactly as it was. Eleven years later it opened as a museum. We were shown around by Debbie, whose family were polishers in the business. Women were not trusted to actually make the products.

Not that the men were trusted very much either. At the beginning of each day, every worker was given a box with a weighed amount of gold and every evening the box had to be returned with any scrap so that every ounce could be accounted for.

Even so, there was quite a bit of dust kicking about the factory, so all the sweepings off the floor, and every bit of cleaning gear including rags were collected up and eventually burned in the furnace downstairs to recover the waste gold. Even the lino was ripped up and burned once a year! We saw an (imitation) block weighing almost a pound which had been collected this way.

In the photo above you can see Debbie has a little pipe in her mouth which the male jewellers would use to intensify the flame in exactly the right place. If you look closely at the gas tap you can see a second pipe and tap which was installed in the 1970s to supply compressed air. None of the jewellers ever used this because they reckoned it didn’t give them enough control. Debbie told us that the pipes stayed in the corner of their mouths all day long, even when they smoked and ate their lunch!

The factory was built with skylights in the roof to allow natural light into the factory. When their neighbour built a two story building that threatened to block the light, the Smith & Pepper directors objected. As a compromise, the neighbor agreed to use glossy white bricks (normally used in public toilets) on his wall if S&P paid for them. This is why in photo 1 the wall changes to normal bricks at the end of the skylights.

The rather blurry photo 2 is a machine for embossing patterns on to metal foil. The racks behind have hundreds of different patterns.

Photo 5 shows the polishing line where the women worked. All the staff were paid piecework rates, so they had to work as fast as possible. The machines are all driven by a shaft extending the length of the factory, that would have originally been driven by a steam engine.

In the sixth photo, Debbie is demonstrating a drop press. You pull the rope to raise a weight with a metal die, then let it fall on to a piece of gold creating a pattern. The worker who operated this press was in his 80’s when the business closed.

The green cupboard is where electroplating was undertaken. The doors are intended to stop the toxic fumes from escaping into the factory. There is no sign of safety equipment anywhere.

The final photo is the generator where the current was produced to run the electroplating bath. On the wall is the controller, which had to be manipulated very carefully with rubber gloves to prevent electric shocks. The dangerous chemicals were mixed on the bench below, right next to where the workers made their tea.

The tour ended in the directors office. The company only sold wholesale to the trade, and buyers would visit to look through the catalogs and inspect samples.

If the manager thought an order was about to be placed, he would rap sharply on his desk and the office girl would bring tea and a biscuit. If it looked like a large order, he would rap twice, and someone would run out to a bakery and get some cake, and a glass of champagne would be produced. If the order was insignificant he rapped three times, and she would come in and say there was a phone call – the salesman would then walk out and never return!