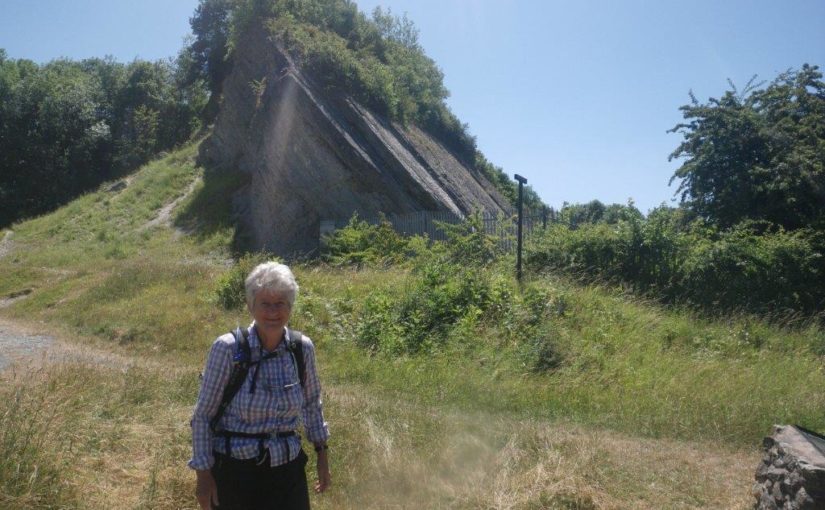 About 430 million years ago during the Silurian period, the Midlands area of the UK was covered by the shallow Iapetus Ocean. Because it was near to the equator the tropical waters saw the development of coral reefs, shellfish and other invertebrate creatures.

During this time, most of the earth’s dry land was concentrated in the Gondwana supercontinent, which covered the south pole. In the northern hemisphere, three smaller continents named Baltica, Laurentia and Avalonia drifted towards each other and eventually collided. At the junction of the last two, a ridge of limestone was pushed up out of the sea creating a line of hills that can still be seen near the town of Dudley.


We have already explored a section of this geological formation when we took a canal boat through the Dudley Tunnel, and we found it so interesting that we wanted to learn more. On our walking tour of Birmingham, our guide recommended Wren’s Nest as a place where we might find fossils, so we set off this morning for a day’s hunting.

The first person to understand and describe the Silurian System was Scottish geologist Sir Roderick Murchison, who published a paper in 1839. He was a member of the Geological Society of London, and colleague of Adam Sedgwick, Charles Lyell and Charles Darwin. He was also one of the founders of the Royal Geographical Society and served several terms as president.

Murchison spent considerable time at Wren’s Nest, and 65% of the fossils illustrated in his 1839 paper came from Dudley. He gave many public lecturers about his discoveries. In New Zealand, the South Island town of Murchison near Buller and the Murchison Mountains in Fiordland are named after him.

Limestone has been extracted from Wren’s Nest since the 15th century, first for fertiliser but mostly for use in iron smelting. At the height of the industrial revolution up to 90,000 tons a year was removed from Wren’s Nest mines. Quarrying and lime working ceased in 1925 and the site was abandoned.

We spent about an hour fossicking around the old quarry area. There wasn’t much to be seen on the surrounding rock walls, but we soon realised that the loose mounds in the middle of the site were basically all fossil material. Photo 2 is all coral, and in photo 3 you can clearly see many shells. The nearest sea these days is probably 100 km away.

In photo 5, the patterns on the rock are caused by wave action on the sea floor. Softer organic material must have covered the shell and coral sand before it had a chance to flatten out. These are known as the Ripple Beds. The previous photo (top of page) shows how the sea bed was tilted to the side as it was pushed up during the continental collision.

The entire area below where we were exploring is honeycombed with tunnels, caverns and deep pits. Some are still filled with water so that canal boats could remove the limestone. A couple of the caverns are reputed to be large enough to fit the volume of St Paul’s Cathedral inside!

These tunnels used to be publicly accessible, but they have become dangerous and will require significant amounts of funding before they can be opened to tourists. In the background of photo 6 you can see one of a series of blocked-off mine entrances known as The Seven Sisters Caverns.

The second to last photo is a selection of shells and pieces of coral that we took as souvenirs. There is so much material available that visitors are encouraged to collect fossils, provided they don’t use hammers or other tools to break up the rock.

The final photo 11 showing the main quarry site should have been the first, but something borked the upload and I had to do it a second time.