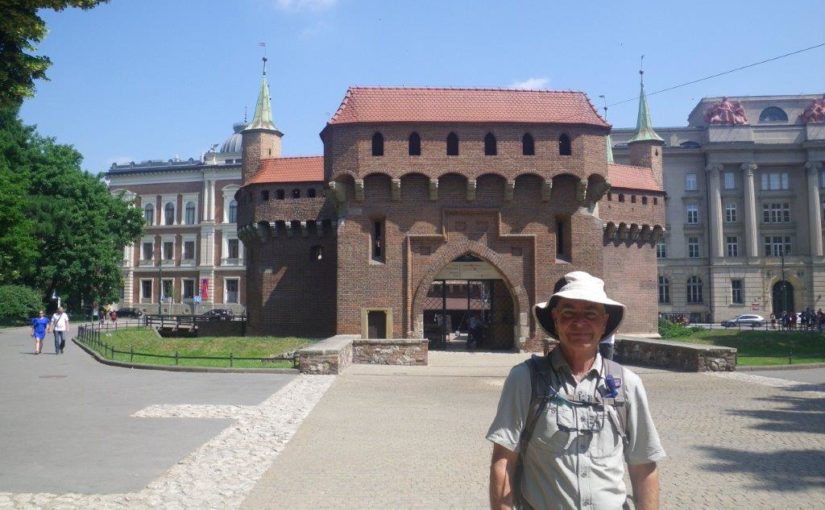 We enjoyed our walking tour of the Jewish Quarter so much that we decided to do another walk around the old town with the same company. This time our guide was named Dimitri, and he was a student of linguistics, working part time to help pay for his studies.


Our first stop was the Barbican gate at the north end of town. It was built in 1498, is considered a medieval masterpiece, and is one of only three surviving examples in Europe.

In the late 18th century, when the Austrians gained control of the city, there was a move to demolish the structure, but the local mayor convinced the deeply religious occupiers that its removal would allow the prevailing north wind to blow through the gate and down the main street, which might lift the skirts of women outside the St. Mary’s Basilica and distract the citizens from their worship.

One you get past the Barbican you come to St. Florian’s Gate, which leads to the main square. Traditionally, all Polish kings had to walk through this gate into the main square, then down Grodzaka St to the castle where they would be crowned.

After we walked through, we stopped outside the Basilica to hear a trumpet which gets played from the top of the tower every hour in four directions. One of the interesting aspects of this is that the melody stops abruptly in the middle of a bar.

In the early 1920’s a visiting American named Eric P. Kelly asked his young guide why the tune was never finished. She didn’t know the answer to this, but instead of admitting it she invented a story which has since assumed the status of legend.

In 1241, the city was invaded by Mongols and largely burnt to the ground. In 1259 the Mongols returned, and ravaged the city again. After this trumpeters were employed to keep a look out for invaders from the top of the church tower, and to blow their horn to sound the alarm. According to the imaginative young guide, the Mongols shot an arrow at the trumpeter which caught him in the throat and ended the tune before he could finish the alarm.

In actual fact, the warning signal was supposed to cut off, waiting for a response from the guard at the gate, finishing the tune. The invented legend was reinforced when Kelly published a novel titled “The Trumpeter of Krakow” in 1929. It’s pretty hard to spot, but if you look closely at photo 4 you might be able to see a trumpet poking out of the very top window.

Our next stop was the Jagiellonian University founded in 1364, making it the second oldest university in Central Europe, and one of the oldest surviving universities in the world. One of its famous students was Nicolaus Copernicus.

The tour ended at Wawel Royal Castle. Near the gate is the Tadeusz Kościuszko Monument which depicts the Polish and American hero of independence on horseback. He became famous in our part of the world when Australia’s highest mountain was named after him.

We also heard more about the dragon of Krakow. Supposedly one of the early kings did a deal with the creature that required a virgin girl to be left tied up outside his den as an offering to prevent him from eating any of the citizens or their livestock. This worked fine until the city ran out of virgins, except for the royal princess.

The king called together all his knights and requested that one of them slay the beast. Unfortunately they were all far too busy with other tasks and they refused. A shoemaker named Skuba then left a calf stuffed with sulphur outside instead of the virgin, and when the dragon gobbled it up it started burning inside. He swooped down to the Vistula river and stated drinking water in a futile attempt to quench the fire, but eventually he burst from the pressure and the city was freed.

At the entrance to the cathedral (photo 6) there are some huge bones hanging on the wall at the left which are supposedly the dragon’s remains. Modern DNA shows that the skull is from a rhinoceros, and the large bone is a whale jawbone.

When the tour finished, we returned to a street market we had passed and purchased some lunch. Our final destination for the day was a museum under the old Cloth Market in the middle of the main square.

In the early part of the 21st century the square was excavated and the foundations of historical buildings were preserved. The square was subsequently replaced and tourists are now able to walk through the subterranean tunnels admiring the ruins.

We got a great insight into the medieval city, which was once one of the main centers of trade in Central Europe. Authorities closed some of the traditional highways which bypassed Krakow, forcing merchants to pass through the city and pay taxes depending on the size and construction of their wagon.

The last three photos are of a re-constructed silversmith’s workshop, which I thought might be of interest to my sister Annie who makes silver jewelry.