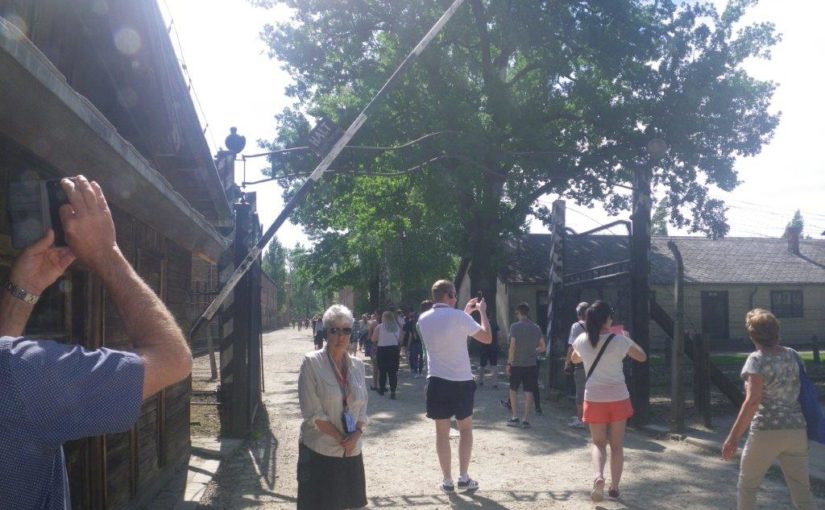 For our last full day in Krakow, we booked a tour of the nearby Nazi death camp followed by a trip down a salt mine. I can now appreciate why the government here recently passed a law which forbids these camps being referred to as Polish.

The bus that took us to the town of Oświęcim (Auschwitz is the German name) played a video interviewing a Soviet cameraman who was with the troops who liberated the camp at the end of January 1945. Some of his footage was horrifying – hundreds of dead bodies, and thousands of prisoners who were no more than skeletons covered with skin.

I was astonished by how many other other tourists there were. Apparently over 2.1 million people visited last year. We noticed about a hundred Israeli soldiers in their IDF uniforms, and were told that all their military visit at some point.

When we walked through the famous gate with its sign: “Work sets you free”, I was surprised to see attractive brick buildings and a tree-lined avenue. Apparently the main part of the camp had formerly been barracks for the Polish army. The electrified barbed-wire fences and the guard towers gave a clue of its later use.

I was intellectually horrified by the statistics given to us by our guide – over 1.1 million people were murdered here. Most of them were Jews, but there were also 150,000 Poles, 23,000 Gypsys, 15,000 Russians and thousands of others including Jehovah’s Witnesses and homosexuals.

When we entered Block 4 however, we were confronted by one of the most disgusting sights I have ever seen. Human hair shaved from over 140,000 victims was piled up in a display case, and I felt tears welling up uncontrollably. There is a sign asking people to not take photos, which I was happy to comply with because this is one of those sights that I would prefer to “un-see” if it were possible. There are images on the web if you are curious. I still feel traumatised as I write this.

The Russians found over 7 tons of hair in storage at the camp, but the majority had been sent back to Germany to be used as raw material for manufacturing, including felt stockings for submarine crews.

Other exhibits showed piles of shoes, suitcases, brushes and other household items. There were many historical photographs, including one of Jews being marched out of the Lodz Ghetto in 1943 which may well have included some of Felicity’s relatives.

Anyone who could not work was sent to the gas chambers, so there were lots of prosthetics formerly owned by the disabled.

In photo 8, our group is entering the first gas chamber. We could see the holes in the roof where the Zyclon B pellets were poured in. It is activated by heat, so the victims were crammed into the airless room as tightly as possible. The Nazis perfected mass murder on an industrial scale, and the only limiting factor was disposal of all the corpses. They clearly knew that mass graves would be evidence of their crimes, so the bodies were disposed of in several crematoriums.

We climbed back in our bus and drove the short distance to the Birkenau section of the camp. This was closer to the rows of wooden barracks that I had expected, but what I hadn’t anticipated was that it was so vast – over 422 acres. This was constructed primarily as a death camp, and a railway siding was built so that the cattle trucks filled with victims could be brought inside the gates.

A wide platform between the lines was where people were sorted into those strong enough to work and those destined for the “showers”. One of the reasons that the camp was built here is that there was an IG Farben industrial complex producing synthetic rubber and petrol from the extensive nearby coal reserves. Because the factory was far to the east of Germany it was relatively safe from allied bombers.

The two largest gas chambers were situated on either side of the platform, but before the Nazis left they dynamited the buildings in an effort to disguise their true use. I was very glad to be outside the wire again.

I wouldn’t say that the tour was enjoyable in any way but I’m glad that I went. One of the English women on the tour told us that she could “see the evil in the eyes of the Nazi guards”, and that there is no way she would have co-operated with the occupying forces as many Poles did. I was tempted to tell her to Google “Stanford prison experiment” which showed that nearly all of us are capable of de-humanising others and committing atrocities in the right conditions.

In the afternoon our bus took us to the Wieliczka Salt Mine. This area of Poland was once under a prehistoric ocean, and there are salt deposits going down hundreds of meters. Salt has been mined here since the 13th century, when two kilos was worth a kilo of silver.

After 700 years of continuous operation, it closed in 1996 because there was cheaper salt available elsewhere. There was also a bit of a disaster near the end of the 20th century when fresh water found it’s way into the mine. We saw several small streams and several lakes containing brine (with about 280 grams of salt per litre), and this is not a problem. Fresh water on the other hand dissolves everything it comes in contact with, which is not good when the roof is held up by salt walls.

They must have decided that the mine is safe again, because nowadays over a million tourists visit each year. As well as walking tours, you can sign up for “subteraneotherapy” and spend a day doing exercises and breathing the humid, mineral-rich air. Felicity says this is a scam and that while some asthmatics may get temporary relief there is nothing that might effect a cure for anything.

We walked down hundreds of steps until eventually we were 130 meters below the surface. At the beginning our guide told us there were over 250km of tunnels, of which we would be visiting less than 1%. She told us we should stay with her at all times “because I know the way out”.

Some of the miners enjoyed being underground so much that they spent their spare time carving all kinds of sculptures. There are several chapels where masses are performed, a concert hall taking advantage of the unique acoustics, and other areas which can be hired for weddings and other events.

At one of the underground lakes I looked at the clear blue water and asked the guide if I could have a swim, but she said if I did she would loose her job. Like the Dead Sea, the salt concentration is so high you can’t get properly under the water anyway – you just float on the top. It sounds to me like it would be an interesting experience.

Fortunately, we didn’t have to walk up hundreds of steps to get back to the surface. Instead we crammed into a double-decker elevator and were whisked up in a few seconds.

Krakow has been even more interesting than I expected, but today we are off to Lodz, to see what we can find out about Felicity’s ancestors.

3 thoughts on “Auschwitz-Birkenau and Wieliczka Salt Mine”