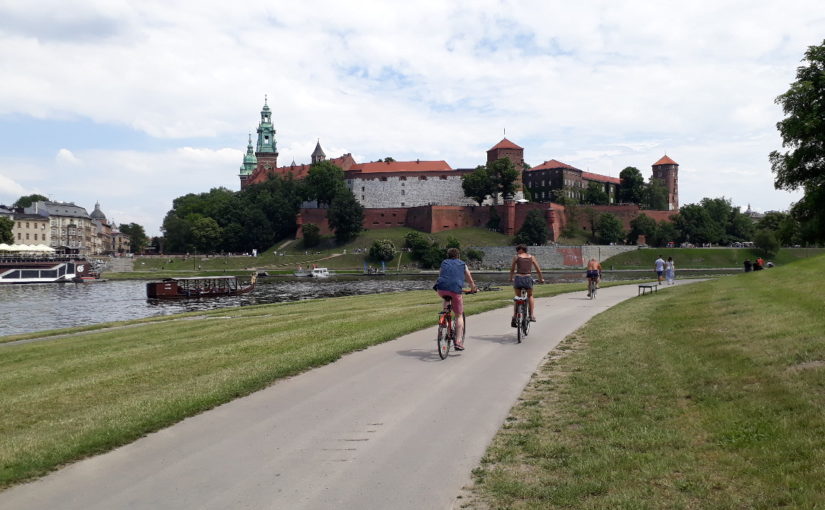 I’ve spent the last couple of days exploring the area around Krakow on a hired mountain-bike while Felicity has been at the WONCA conference. Many Poles ride bikes, and there are bike trails all over the place.


I set off along the southern bank of the Vistular heading west, and continued until the bridge where the A4 highway crosses the river. In the first two photos, you can see the Catholic Church of the Assumption at the top of the distant hill – that’s where I’m headed.

The river has high stop-banks on either side, so there must be times when it floods rather seriously. In the green space outside the banks I saw dozens of small one-room huts surrounded by beautifully tended gardens. I presume that in Communist times, when travel outside the country was restricted, people built these little retreats to enjoy their holidays.

Around Bielany I ended up having to ride on the road for a little while, but soon found the small lane leading up the hill into the Bielansko-Tyniecki Park. I arrived in the church courtyard just as the bells were ringing at midday, and wondered if I had made a tactical error by not buying some food for lunch before heading into the forest.

I noticed numerous signs with pictures of ferocious looking wild boars, which I assume were to warn people that they could be dangerous. I wasn’t particularly worried because I figured I would be able to ride faster than they could run (especially if assisted by fear and adrenaline!).

After about half an hour riding along the forest road, thankfully closed to vehicular traffic, I heard a bone-chilling roar that sounded a lot like a lion or another big feline. I knew that lions’ range extended into Europe in ancient times, but soon I noticed a sign that included the word “zoo”, and I decided I could relax.

Throughout the park I saw numerous small shrines, some with just a cross, but others with a statue of the virgin Mary. One or two had fresh flowers and even burning candles, so somebody obviously takes the trouble to visit regularly.

When I arrived at the zoo entrance I was delighted to see that there was a cafe with tables and umbrellas, so I stopped to buy some lunch. It was a bit of an adventure because I had to place my order at a small hatch and the menu was only in Polish. I could recognise things like hamburgers and hot-dogs, but most items were a mystery. I settled on something that included the word tortilla, which turned out to be a wrap with chicken and salad, and a pretty good choice compared to the plates of deep-fried food that other patrons were eating.

I had just set off again with my energy restored when I saw a sign advertising Szlaki Rowerowe Garbu Tenczynskiego, which looked a lot to me like bike trails. The translation turned out to be “Trails Cycling Tenczynski’s Hump”, but I didn’t discover this till I arrived home.

There were coloured markers on the trees, which didn’t appear to correspond to the map, but I set off along a blue trail that seemed to be heading in the general direction of home. I was soon confronted by one of the sweetest sights a man on a mountain-bike could imagine when on the top of a hill – a narrow single track winding invitingly into the trees (photo 4). As the trail got steeper I was delighted to find that the corners were bermed and the route designed to make the most of natural features such as rocks and fallen trees.

All too soon I was back down at the Vistular River near another bridge, so I crossed over and re-traced part of my morning’s journey until I came to the Park Skaly Twardowskiego where I knew there was a large quarry filled with water. One of the other doctors at the conference had told us that she had been for a swim there and this seemed like a pretty good idea to me on a hot afternoon.

The quarry is quite spectacular, with sheer cliffs most of the way around and deep blue water. The area is behind a fence and there are “No Swimming” signs everywhere, but I could see from the top that others were enjoying the water, and sure enough I found a gate in the fence which had its lock broken off so I went through and hunted for a spot where I could get in the water. It was beautifully refreshing and well worth the effort.

By the time I arrived back at the bike shop I had been riding almost six hours, so I was utterly exhausted and rather saddle-sore. When I arrived home I had to have a wee lie-down to recharge before heading off with Felicity to a BBQ event at an old fort on the edge of Krakow furthest from the river.

Even though my muscles were still feeling the effects of my long ride, I was determined not to miss the opportunity to do it again. My plan was to ride about 25 km north to visit a national park with many interesting limestone formations. I was a bit concerned that I was being over-ambitious, because I knew that even if I managed to explore the park without getting lost it would add another 10 kms making it a very long ride.

After about 40 minutes of riding mostly on the road in traffic I came to a place where there was a detour off the relatively small road I was on and I realised I would be on a highway for a while. I was stopping every 10 minutes or so to check Google Maps to make sure I was on track, and combined with the stress of watching for cars I decided to switch to plan B and get off-road as soon as I could. It is particularly dangerous riding where people drive on the right side because all your instincts about where traffic was coming from are wrong and you have to concentrate all the time.

It didn’t take long before I entered the Park Jordana and I could start enjoying the riding and pay attention to the views instead of the traffic. I came across a pretty patch of wild flowers that deserved a photo, but as there were several naked men sunbathing out in the middle of the grass I had to choose my view carefully.

I crossed a road into Park Krakowski Blonia, then followed a path along the stop-banks of a small stream towards the north-west. I decided to head back into the Bielansko-Tyniecki Park (but from the opposite side to the previous day), and look for another thrilling downhill track. It was lunchtime when I arrived at the zoo, but I was hoping to find something more interesting for lunch so I didn’t stop.

This time I followed a yellow trail, and was once again rewarded with a speedy trip back to the river. I had to ride almost all the way back to town before I found a suitable looking restaurant / bar, but I was able to enjoy a bowl of traditional cabbage soup with a chunk of corned beef so I was glad I had waited.

I then rode east along the river on the south bank, until I came to the end of the path at Zablocie. I crossed a bridge and was able to carry on for another few kilometers along the northern bank before that path ended at Dabie.

On the way back to town I stopped to take a photo of a sculpture called “Pig in the River”. In the background is a very interesting building that is home to the Centre for the Documentation of the Art of Tadeusz Kantor Cricoteka. The brown steel art gallery is a result of an international architecture competition, and is built right over the top of an old disused power station. The brick chimney is part of the original structure.

I had just enough energy to ride around the outside of Krakow’s medieval wall before returning my bike and heading home for another well-earned rest.

In the evening Felicity and walked into the main square where there is an art gallery in the old “Cloth Hall” that was once the centre of the local textile trade. The conference organisers put on a gala dinner in the actual galleries, so we were surrounded by huge and valuable paintings depicting Polish and central European history. We were told that the venue only allowed white wine, presumably because the insurance company was worried about unruly guests splashing red wine onto the artworks.

At the end of a delicious meal, we were all invited to go up to a roof terrace where we could drink a final glass of desert wine and watch the crowds in the big square below. Even though it was after midnight by this time, there were still thousands of tourists enjoying the warm summer evening. All the historical buildings are lit up at night, so the city is even more attractive than during the day.

3 thoughts on “Biking around Krakow”