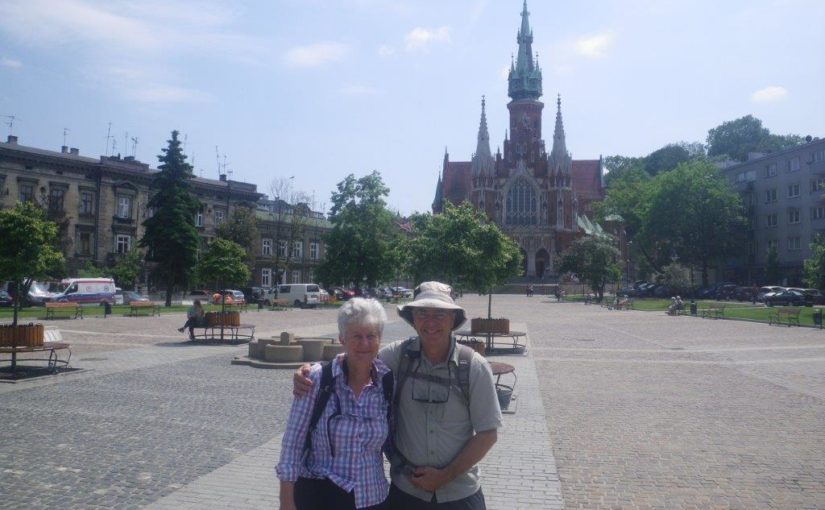 On our first day in Krakow we set off from our apartment at Stradomska 5 (marked on the map below), and walked into the old town which is very close. The surrounding green park is just outside the city wall. When we arrived at Rynek Glowny (the main market square), the first thing we spotted was a group of tourists about to depart on a walking tour of the Jewish Quarter, so we decided to tag along.

A few hundred meters outside the city wall our guide Bartek stopped us in the centre of a wide avenue, and explained that it was once a river dividing the medieval town of Krakow from the neighboring town of Kazimierz, which was originally located on an island. Due to extensive engineering works to control flooding, this section of the river eventually became a fetid swamp, and the area was reclaimed to make life more pleasant for the surrounding inhabitants.

Kazimierz was founded in 1335 by, King Casimir III, who was one of the best leaders Poland has ever had, according to Bartek. Jews had been allowed to live in Poland since 1264, but King Casimir encouraged them to settle, partly because the expanding economy needed financiers, and at that time Christians were forbidden to lend money. Apparently one of the King’s 200 lovers was a Jewess, and this no doubt contributed to his goodwill.

At one time, Jews made up over 25% of Kracow’s population, but things took a bad turn in the middle of the 14th century when the Black Death (bubonic plague) spread across Europe. It soon became obvious that Jews were dying at a much lower rate than Christians, and rumors about curses, and possibly poisoned wells began to cause tensions. In fact, the explanation was probably that Jewish customs required lots of hand washing and even regular bathing, which was not common among their neighbors.

There are six main synagogues in Kazimierz, although only one is still functional. Recently a Jewish Cultural Centre was opened to teach people about the religion. Felicity and I were struck by the fact that there was zero security – in most parts of the world (including Auckland), there is usually a guard outside any facility where Jews congregate.

When the Nazis arrived in 1939, all the Jews were rounded up and forced into a ghetto across the river in the Podgórze District. 16,000 people were made to live in a small area with just 320 buildings that had formally housed 3,500 residents. Most apartments had at least four families, and the average space for each person was only 2 square meters. They were required to do forced labour, some working for the famous Oskar Schindler in his enamelware factory.

The modern bridge that we used to cross the river had some interesting artwork, which the photo I took a couple of days later doesn’t do justice to. Suspended in the wires holding the bridge together are about a dozen sculptures of acrobats which move in the wind.

In the photo above, the two of us are standing in front of St. Joseph’s Church on Podgórski Square. Although the Gothic features are fascinating, it was actually built at the beginning of the 20th century, so it is not particularly historic.

Our tour ended in Zgody Square, where in 1942 nearly all the Jews were assembled before being sent to Nazi death camps. Because they were told that they were being moved to better accommodation, everyone bought suitcases and household items including furniture which had to be abandoned before they boarded the trains. The square is now filled with rows of chairs to commemorate the event. The small grey building in the background was originally a bus station, but it became a guard house at one of the four entrances to the ghetto.

Bartek was a very interesting guide with a passion for history. He has a degree in archaeology, and was previously employed to study sites whenever excavations were needed for modern construction. He became disillusioned one day when he was working at the bottom of a 7 meter deep trench. A small boy watching him was told by his mother “if you don’t get a good education you’ll end up digging ditches like that guy.”

Afterwards we walked back across the river to the Kazimierz market square where an old circular abattoir in the centre has been converted into dozens of small stalls selling traditional Polish street food called Zapiekanki. These are made from half a baguette covered in a range of toppings and covered with melted cheese. These are very cheap and very filling – we couldn’t finish the two we purchased even though they were delicious.

In the evening we attended the opening function for the WONCA conference where Felicity is running workshops, and we learned a little more about Krackow’s history. Human remains from as far back as the 4th century have been found. The original settlement was menaced by a dangerous dragon which lived in a cave under the town. Many brave knights attemped to slay the beast, but it was eventually dealt to by a leader named Krakus who fed it a poisoned lamb. The dragon is now the symbol of the city, which was the capital of Poland until 1596.