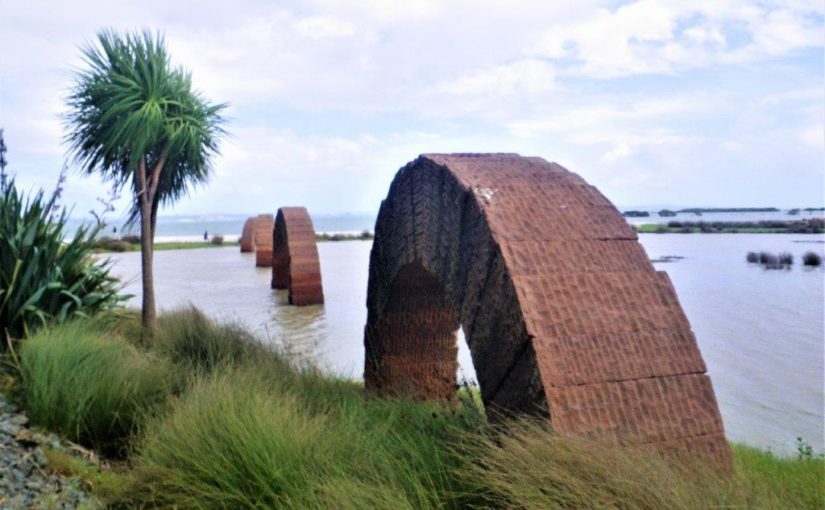 If you travel north from Kaukapakapa on SH16 heading towards Wellsford, you pass some huge and unusual structures on the coastal hills that form part of Allan Gibbs’ collection of super-size sculptures. As it is on private property, you can’t just turn up when you want, but this weekend was a fundraiser for the Auckland Art Gallery so we purchased a couple of tickets.

On Friday afternoon we decided to drive north in the motorhome and spend the night somewhere in the Kaipara region. We had a look at the carpark beside the boat club at Hoteo Bridge, but it was close to the highway so I decided to continue north and park at the Port Albert Domain.

I was delighted to discover that the prime spot, literally out in the mangroves with water views out both sides of the van, was still vacant. We were treated to a sunset out over the harbour in one direction, followed a little later in the other by the moon rising over the hills at the top of the Topuni River.

After a coffee we walked up the road through the small settlement. There were several properties for sale. On house had a huge grape vine spilling out onto the road. We stopped and harvested a kilo or so of delicious ripe grapes, and munched them as we continued up the hill.

I would have gone for a swim if the tide had been in upon our return, but we walked all the way out to the end of the wharf before finding any sign of water, at the bottom of a ladder designed to assist people off a boat, not to facilitate swimming. Fortunately, we were parked in a way that our motorhome blocked any view of our outside hot-water shower at the rear of the vehicle.

We were very glad that we approached Gibbs Farm from the north on Saturday, because there was a long queue of vehicles waiting to turn into the driveway extending south. We were able to turn right immediately, then merge-like-a-zip straight into the front of the line.

It took us over four hours walking to visit the 20 artworks on his map, plus the latest acquisition (the white spiral in photo 9 of the series below) which looks a lot more impressive from a couple of kilometres away. We were also distracted by ostriches wandering around on the loose, plus giraffes and zebras in there own special enclosures. One of the giraffes has a corrugated-iron “friend” made by Jeff Thomson.

Around midday we stopped for a picnic lunch under a pohutukawa with a view of “Arches” by Andy Goldsworthy, stretching out into the Kaipara Harbour. The stone was quarried in Scotland!

By the time we returned to the motorhome we were tired of walking, because the route had taken us up hill and down dale many times during our trip. It was well worth the effort, however.

When we arrived at Atiu Creek Regional Park, our destination for the night, we again had water views in two directions. The carpark where self-contained vehicles can stay overnight is right on the top of a ridge, right at the narrow section of the Tapora Peninsular. In the old days, Maori used to keep spare canoes at the tops of two creeks so that they could walk over the hill and save hours of paddling in the open harbour.

As we were the only vehicle in the car-park, we were again able to make use of our outside shower when it got dark.

In the morning we set off along the Oruawharo River Trail. Including the few detours we made, the map suggests we covered about nine kilometers before completing the loop. I have ridden this trail on my mountain bike a couple of times, and while the first part of the trail downhill through the forest was more fun on two wheels, the long slog back up the hill was much more fun on foot without a bike.

It was only 11.30 when we finished, so we had a cup of tea then drove to Warkworth for lunch parked on the edge of the Mahurangi River. It’s our 29th wedding anniversary today, so I’m off to open a bottle of bubbly and eat whatever delicacies I can hear Felicity cooking in the kitchen!