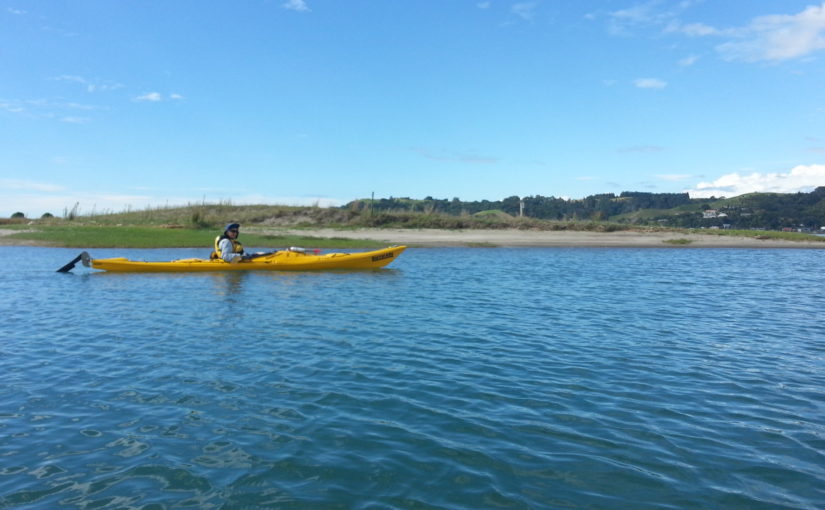 There is a great free campsite at the mouth of the Waiotahi River, just south of Whakatane. After finding a good spot we went for a long walk down Waiotahi Beach to the south before dinner.


We had thought about kayaking up the river, but the tide was out in the morning, so after breakfast we decided to decamp to Ohiwa Beach, just to the north. This is a commercial campground, but very attractive and with great sea views from our site up the hill.

The Ohiwa harbour is huge, but very shallow, so we had to wait till the afternoon to get our boats in the water. In the meantime we went for an hour and a half walk up the Ohiwa Nature Trail, and on to the Bryans Bay Loop track, past the Onekawa Pa site. In Maori times, this was a densely populated area, but now the only sign of life is a few sheep and some young steers.

In the afternoon we drove down to the edge of the harbour and launched the kayaks. We circumnavigated Uretara Island, which is a wildlife refuge, then followed the coast back to the motorhome. I was a bit concerned that the tide would go out before we got there after seeing how empty the harbour gets.

After coffee, we walked out to the beach and up around the spit on the south side of the harbour entrance. Then we followed the coast back to the holiday park.

Something is badly wrong with the motorhome electrical system, so Felicity had to cook dinner by the light of her cellphone torch, even though we are plugged into the mains. It is rather inconvenient, so we are thinking we might head back to Auckland tomorrow, instead of Saturday as we had planned.