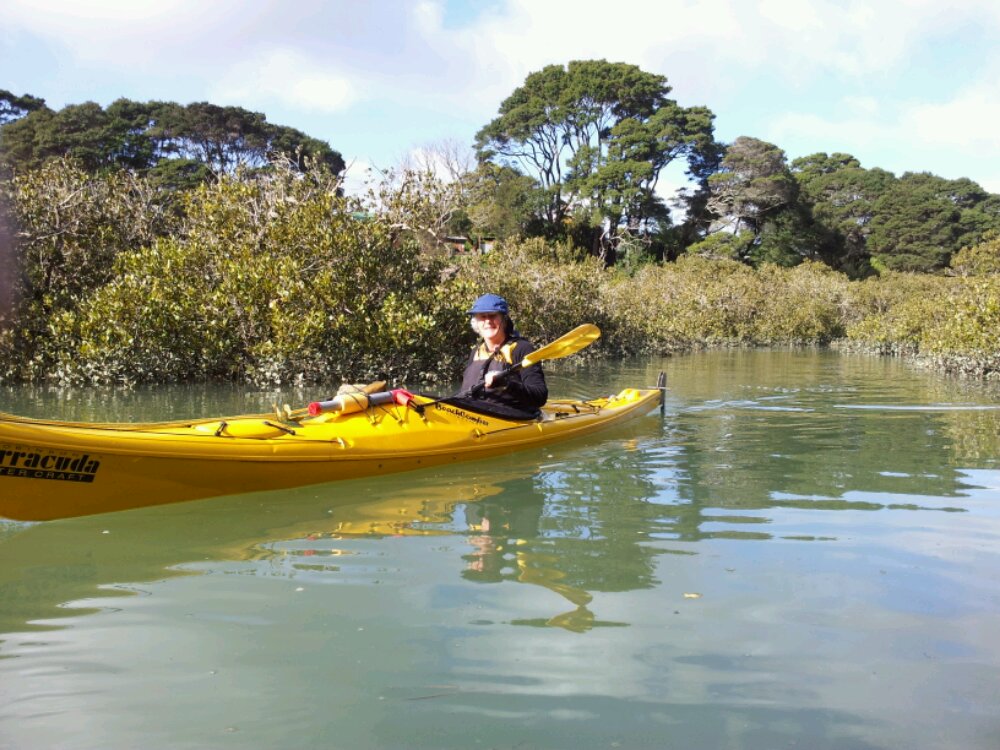 It started raining quite heavily as we left home this morning with our kayaks on the roof, and we wondered if we had made a bad choice of activity. The rain radar at the Met Service hadn’t shown much coming, but I have experienced showers in the past that didn’t officially exist.


We turned off the motorway at Te Atatu, and took the first road down to the river. There is a flash boat club there, but we launched through the mangroves at the bottom of the street. It would have been a drain if the grating up on the road wasn’t totally blocked, causing a deep puddle.

This was  actually very fortunate, because when we returned  the tide was much lower and we had to wade quite a way through stinking mud dragging our boats. If we hadn’t had the puddle available to wash in the inside of my car would be disgusting!

As we glided through the boats you see from the motorway bridge, the sun broke through the clouds, and we realised we had made the right call. A couple of small creeks diverted our attention, but we headed steadily up the Whau River towards Avondale.

One of the side channels looked promising at first, but became smaller and narrower until I started to think we were going to have to turn around. I could see masts up ahead, so I knew there must be a deep channel to our west.

By now it was getting pretty close to high tide, so we were eventually able to push through the mangroves and enter the Wairau Creek.

There are a whole bunch of mostly derelict boats moored just inside the creek at a run-down boatyard. It looked like some of the  boats; and some of the vehicles on land as well, were occupied. Probably a very nice place to live.

One section of the bank had a grove of kauri trees, that someone had thoughtfully enhanced by inter-planting with pine and macrocarpa. I guess it will mean something will survive when kauri die-back strikes.

As the creek began to narrow and enter the bush, we saw a very interesting building with a substantial wooden landing. It seemed to have Asian carving of some kind. I tried to get a photo, but it is quite hidden in the trees.

At the top of the river, we entered a narrow gorge for the last hundred meters. Although we were in thick bush, with no buildings in sight, we could tell civilisation was close by the supermarket trundlers upside-down in the water.

There aren’t great opportunities for landing a kayak, but it is possible, and we were hungry, so we scrambled up the bank and found a spot among the gorse and wattles. The bank was just hard enough to get up that we decided not to bother going back down to get our forgotten seat pads, so we both acquired wet bums while eating our lunch. It seemed like remote wilderness, but when I looked on Google maps it shows there are houses all around.

A small patch of drizzle while we were eating made us wonder if we were going to be packing up and launching in the rain, but it soon stopped, and we sat in the sun for a while.

We were paddling into the wind on the way back down river, but the tide was starting to flow out so we made good progress. I kept thinking what a stupid idea it was allowing huge commercial buildings along the northern side of Rosebank Rd. Where there could be hundreds of up-market apartments looking out to the north over the river, now there is just a line of enormous blank concrete walls.

We both enjoyed our adventure. Next trip we will go the rest of the way up the main river.