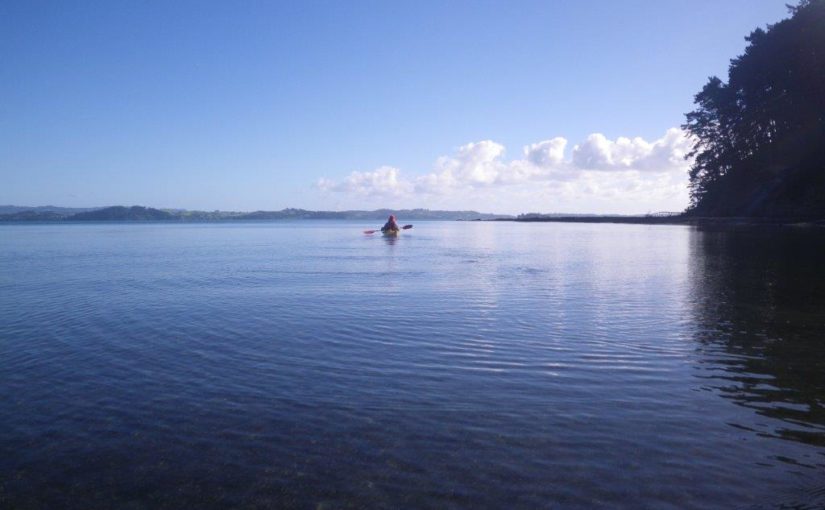 On both Thursday and Friday I noticed that the sea down at Long Bay Beach was absolutely flat, so I thought conditions might be right for a kayak trip to Kawau Island in the weekend. We looked for the closest place to camp, and discovered that self contained vehicles can stay overnight at Scandrett Regional Park, so we drove up late Friday afternoon.


We had a pretty easy trip up to Warkworth ahead of the traffic, then turned off along the Sandspit Road and proceeded out to Snells Beach and Algies Bay. It wasn’t until we arrived at the park (the green headland in the centre of the map), that we realised we have never been there. I think I’ve confused it with the nearby Mahurangi East Regional Park, which we have visited by boat.

The tide was quite far out by the time we’d had a coffee, but we both needed a swim so we waded out until the water was about thigh-deep and flopped in. It was rather warm at the end of a hot day, but still refreshing.

Straight after breakfast on Saturday we launched the kayaks and paddled out into beautifully calm water. Sadly, as soon as we came around Mullet Point and were exposed to the south-east, we discovered that the small waves being kicked up by the incoming tide were just big enough to be outside of Felicity’s comfort zone, so we made the decision to turn back and enjoy the calm waters of Kawau Bay.

Just to the north of Snells Beach, before the beginning of the Matakana River, is a small beach named Brick Bay. We pulled the boats up under a pohutukawa tree, and walked down the beach to explore. At the northern end we were enticed to follow a track up through the a steep bush-covered valley which eventually came out on Puriri Place at the top of the ridge. Suddenly we were surrounded by multi-million dollar homes.

Back down at the beach we enjoyed a swim, then sat at a picnic table eating our lunch. On the trip home, the tide was much higher so we were able to travel close to shore and over the top of several reefs that we had been forced to go around on the outwards journey.

In the afternoon we walked up the Mullet Point Loop Track, and stopped out at the end to look at the views. By the time we arrived back at the van, we were hot and sweaty, so we went for another shallow water swim. A couple of Polynesian girls told us they were envious of us enjoying the water, because they had been in the hot sun all day too scared to go in the water because of jellyfish. We told them that we thought it was unlikely they would be in danger and that they should jump in, but I’m not sure if they took our advice.

Despite the fact that the park gates get locked at 9.00pm, several cars turned up just before that, and a crowd of people hung out on the beach playing rather loud music until about 11.00. They presumably slept under the trees because the cars were still there in the morning.

In the morning we walked back up the hill behind the car park, and continued along the track at the top of the cliff overlooking Martins Bay. After a detour up to a lookout on the north-western corner of the park, we walked past the three remaining baches in Scandretts Bay, all of which can be rented from the council by holidaymakers.

When we stuck our heads into the old milking shed for a look, we automatically started an interesting audio presentation where people (presumably members of the Scandrett Family) talked about what farming life was like back in the olden days. The property was obviously very productive, and grew a huge range of crops and fruit. For many years there was no road, so everything they didn’t grow themselves had to come by sea.

After a cup of tea, we decided to head back towards Auckland, and ended up stopping at Hatfields Beach for a swim, lunch then the use of the dump station to empty our waste tanks. It was nice to have a weekend away without driving far.