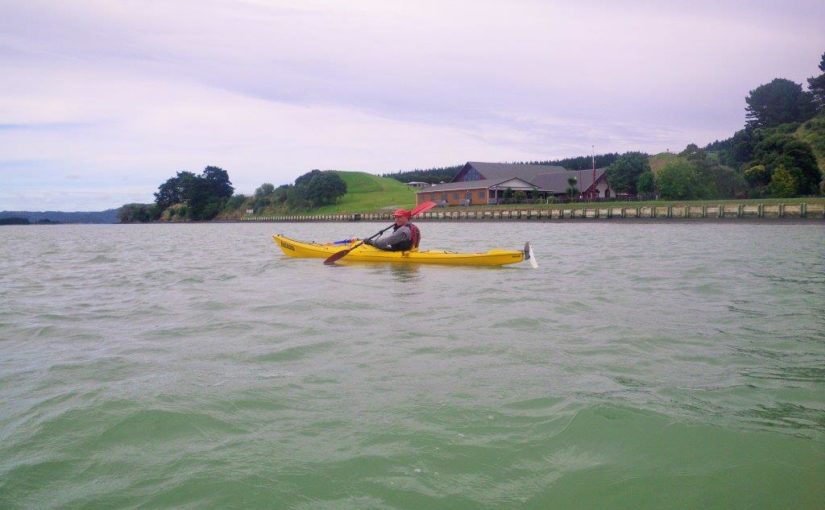 On the southern side of Kawhia Harbour there are some interesting rock formations that we have been wanting to kayak to, and this weekend we thought the conditions might finally be right. Felicity needed to visit the local doctor to discuss student placements, so she arranged to meet him late on Friday afternoon.

We discovered that the annual Kai Festival was happening on the Saturday, so the three possible camping places in town were booked out. Fortunately John the doctor invited us to park in his driveway, and even suggested we eat dinner with him and his wife.

I went for a walk around the town while Felicity did her business, then we drove to our host’s house and had a coffee on their deck. They suggested we all drive over the hill for a swim at the ocean beach before dinner, followed by a soak in the warm Te Puia Springs. The hot water bubbles up through the sand at low tide, and if you take a spade and dig a hole you can make a pool deep enough to lie in. The Tasman Sea was a bit rough to risk going out deep, but it was fun to cool off in the surf after our digging.

There was a bit of an evening breeze by this time, so it was very pleasant relaxing in our warm pool watching the waves crashing in front of us. When we got home we enjoyed a hot outside shower in the garden, then sat around the barbeque eating a fine meal.

After breakfast we looked closely at the maps to figure out where we would go and where we should paddle to stay in the correct channel to avoid paddling against the tide. Then we drove through the town, parked at the main boat ramp then walked back along the coast to check out the kai festival. Apparently many of the delicacies sell out quickly, so it was good we arrived early. We checked out all the stalls, then bought the most interesting food to pack into our kayaks for lunch.

As we were walking back, we passed an impressive double hulled waka being prepared. In photo 2 (taken from the water afterwards) you can see the two red hulls resting on white blocks of polystyrene and the two high taurapa or stern-pieces. The blue waka in the background is still on its trailer. The paddlers must have been undergoing some kind of purification ceremony, because there was a strong smell of burning herb on the breeze.

As we left the town, we passed the Maketu Marae. The Tainui waka from the great Maori migration is apparently buried under the hill behind the building.

We had only been going about 20 minutes when I realized the sea was getting quite choppy, and little white-caps were starting to appear, which is when the wind gets over 10 knots. Worse, I could see that on the far side of the harbour where we were headed the waves were much bigger, and had plumes of spray streaming from the tops. After a short discussion we decided to change our plans and head back north into Te Wharu Bay and explore around the coast to Motutarakatua Point.

The water was mostly pretty calm until we rounded the point and entered the Mangaora Inlet and found ourselves getting hit by strong gusts which stopped it being fun. We turned around and paddled into the bay in front of Ahititi Hill. The cliffs on the northern side had rather spectacular rock formations, and right at the head of the bay we found a small beach to land on. We walked up the hill a bit to stretch our legs, then settled under a huge puriri tree to eat our kai.

The plastic tub of kaanga piro (rotten corn) was not a success, and I am sorry to say we wasted most of it. The inanga (whitebait patties) in white bread were, of course, delicious even when cold, but the most interesting was our collection of seafood, served in a small kono (flax serving basket). We started with koki (shark liver pate) and bread – which is surprisingly delicious if you don’t think about the high mercury content. Next we had some salty dried shark meat, some pawhara (smoked fish and eel), and finally half a dozen dried mussels strung on a wire which were chewy but tasted great. My favourite was the fatty piece of smoked eel.

By the time we arrived back at the motorhome and packed away our gear we were ready for a swim, so we drove over the hill to the north to Aotea, at the entrance to the next harbour north. We decided to save the walk out to the ocean beach for another trip, and climbed down some stairs to the harbour. The outgoing tide produced such a strong current that when I swam hard I could just stay in the same position out from the stairs. We soon noticed some local people were walking up the coast for a few hundred meters, then getting in and enjoying being swept down to where we were, so we gave that a go.

One of the nearest free overnight parking spots is Lake Ngaroto on the outskirts of Te Awamutu, so we drove over there and settled in for the evening. I’ve stayed there on my own a few times, but this was the first visit for Felicity, and my first chance to go for a kayak.

The conditions after breakfast were perfect – no wind to speak of, glassy flat water, and a sunny blue sky. We paddled clockwise around the edge, checking out dozens of interesting maimais. The lake must be a dangerous place in duck hunting season! Sadly the water had quite a slick of blue-green algae, and a sign warned against swimming. As we arrived back to the southern end of the lake we passed a whole bunch of kids learning to sail tiny plastic yachts. They weren’t going anywhere very fast in the almost windless conditions.

After a cup of tea and a chat to my Mum on Whatsapp, we set of on a walk around the six kilometer circuit track. This lake has changed drastically over the last few centuries. Once it was a large shallow swamp, but Maori making eel traps at the exit raised the water level considerably. They built artificial islands by laying rata logs in the mud to make a platform, then covered it with flax then clay to build a raised dry area where they could make a pa. Hidden within the reeds they were reasonably safe from attack.

When European farmers purchased the surrounding land, they cleared most of the trees and dug drains so that they could grow grass and crops on the fertile soil beside the lake. On our walk we saw big fields of corn on the hillsides to the west. When the land was drained the farmers found all sorts of interesting artifacts buried in the mud.

In the 1990s the lake was modified again, with a new outlet being cut with a weir to keep the lake level high enough for recreational boating during summer. This originally meant water-skiing, but these days power boats are banned unless they have a permit for assisting with sailing and rowing events. We saw several fishermen, but the water conditions are not good enough for trout so they only catch inedible introduced species like koi carp.

The weir under the bridge that I was looking at has a fish ladder on each side to allow small fish and eels to migrate upstream. There was one small, very dead fish trapped in the nearest ladder so they obviously don’t all make it.