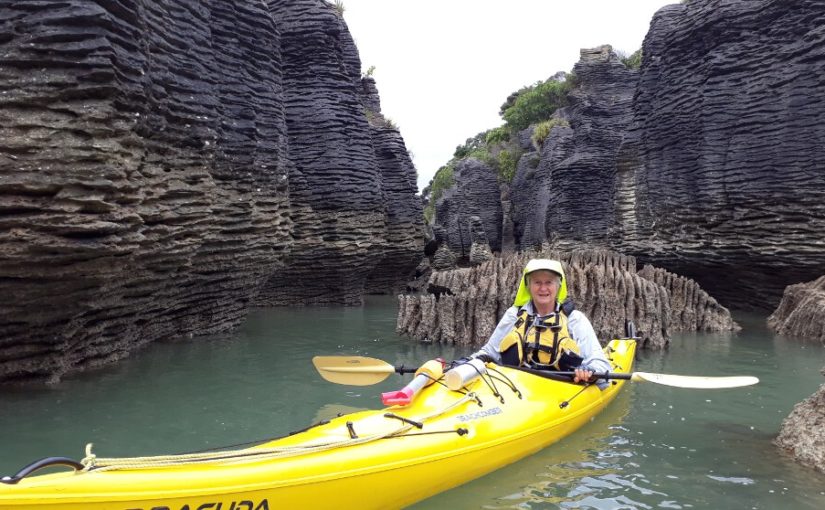 For what is probably our last kayaking trip for the summer, we decided to take advantage of relatively windless conditions and make another attempt to explore Kawhia Harbour. Last time we were here the waves were just too big for us to feel safe, but today the conditions were perfect.

We drove down from Auckland on Friday afternoon, but by the time we arrived it was getting a bit late for a paddle so we decided to walk along the Aotea Walkway to the mouth of the harbour just to the north of Kawhia. There was no wind at all, and the sun was shining brightly, so finding ourselves alone on the beach we jumped into the sea for a naked swim.

This morning the clouds had rolled in and it was rather cool, but still no wind so the sea was just the condition we like. The campground where we stayed is right on the coast, but there is only enough water to launch a boat for a bit over an hour each side of high tide. We wanted to be away a lot longer than that so we drove through town to the boat ramp and put in there.

There is a huge sandbank across the channel directly in front of the town, so we paddled west almost as far as Te Motu Island before we could get around and continue across to the southern coast.

We turned north-east and paddled along the shoreline. The next few kilometers were as spectacular as it gets. Because it is not far from the Waitomo Caves, the underlying rock is karst limestone, and it has been sculptured by the waves and wind into fantastic formations. The native NZ shrubs and trees make the whole area incredibly beautiful.

And we had it all to ourselves! There is a tourist boat that does visits occasionally – that was how we made our first visit many years ago. It is a lot more fun in a kayak though “rock-gardening” around the karst stacks and through narrow channels.

After a picnic lunch on a secluded private beach we continued east, past Motukaraka and O Wiwi Ku Islands. There were huge and noisy flocks of ducks on the harbour, no doubt aware that duck-hunting season has just started and that danger lurks near their normal lakes and ponds. One island had a big flock of variable oystercatchers, and another a flock of white royal spoonbills.

Because Kawhia is a relatively large harbour with a narrow entrance, there is a strong current when the tide goes out, making it dangerous to get caught in the wrong place. The main channels reach the northern shore to the west (ie: sea-wards side) of the town, so it is extremely hard paddling against the flow.

Fortunately for us, the great chief Te Rauparaha was born here, and he solved the problem by digging a channel through the sandbanks to connect two natural channels near the top of the harbour to the north east of town. Actually he didn’t have to do the digging himself because he had slaves from some unlucky neighboring tribe to do the dirty work.

We successfully crossed back to the northern side without running aground, which allowed the tide to help us back to the boat ramp. Kawhia isn’t quite off our to-do list, because we noticed a couple of interesting rivers that will probably bring us back again some day.