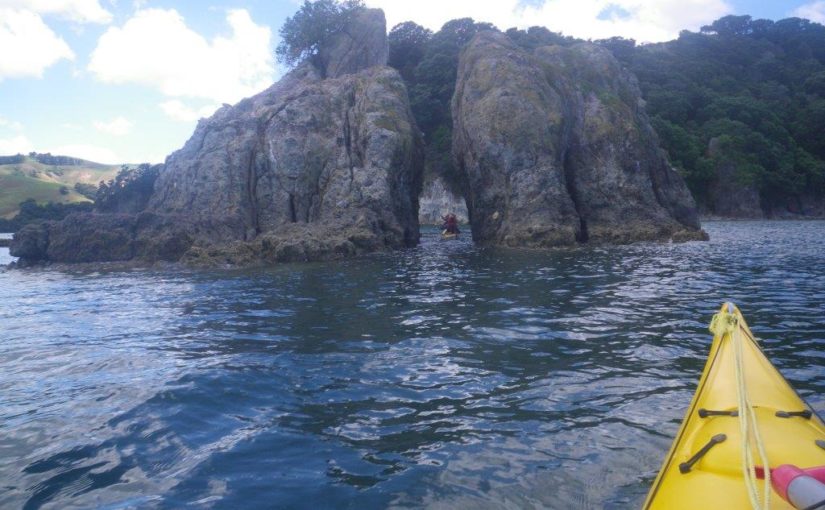 It was Auckland Anniversary Weekend, and the weather looked good, so on Friday morning we headed down to Coromandel with our kayaks on the racks. We had hoped to stay on the edge of Whangapoua Harbour, but we weren’t the only ones to have this idea and all the freedom camping spots were taken. In the late afternoon, and desperate to get in the water for a swim, we called in at the Kuaotunu Motor Camp and found they had a site vacant.


Our main aim for this trip was to visit New Chum Beach, which has an international reputation as one of the most beautiful deserted beaches in the world. There is some confusion with the spelling – both DOC and the Topo maps refer to it as “New Chums”, but we’re going to take the side of the Thames-Coromandel District Council and all the signs on the ground and leave off the “s”.

The walk up the coast starts at the north end of Whangapoua beach, where there are just two freedom-camping spaces. You are supposed to vacate by 9.00am, so we arrived at about 8.30 and parked in a nearby spot with a beautiful view to wait. I ended up talking to the driver of one of the two campervans from the night before, who hadn’t decided whether to stay the allowed second night, but after a while he came and agreed to swap places with me, so our home for the night was secure.

We were all ready to go, so we were off up the beach in a flash with our daypacks on our backs. I wore my boots, but the supposed 30 – 40 minute walk ended up being more like 10 minutes on a sandy path, so I walked around bare-foot the rest of the day. The nikau forest and huge pohutukawa are as spectacular as advertised.

The beach itself is certainly very pretty, and it’s nice that there is little sign of human development, apart from a few pine trees popping up on the hillsides. I wouldn’t place it in my top 20 beaches though – perhaps not even my top 100.

It was also far from deserted. I reckon there would have been several hundred other intrepid adventurers visiting the same day as us, mostly from the “Lonely Planet” demographic by the looks. I’m not meaning to imply this is an entirely bad thing, seeing as how at least 50% were scantily-clad young women!

We walked down the far end, away from the masses, then back to a shady spot under a tree next to a creek. The water flowing down looked pretty clean, so we spent the next hour or so happily building a dam to raise the water level by a 100 mm or so. Then a swim in the surf followed by a refreshing rinse in our new pool.

On Sunday morning we drove over the hill to Coromandel, and continued south for a few kilometers until just after the Manaia Road saddle where we located a steep driveway down to a property located on the edge of Kirita Bay. This is not open to the public, but NZ Motorcaravan Association members can stay for a small payment.

We hung out in the vehicle for a little while after lunch waiting for the tide to come in far enough to launch the kayaks, but we were out on the water by mid-afternoon. We first headed south, to where a small island had a couple of splits that beckoned me to see if I could paddle through.

The coast beyond didn’t look terribly interesting, so we turned back and checked out the sea-caves in the cliff on the north side of Kirita Bay. The tide wasn’t quite high enough for us to be able to paddle right through yet – the photo I took of Felicity shows her about to reverse out of the passage she is in.

We threaded our way through the Matariki Islands and around a headland to Onepoto Bay. As we rounded the next headland to Ohauhunga Bay, we started to cop quite a bit of wind and Felicity decided to turn back.

I continued on to the next point, but increasingly fierce gusts of wind made it unpleasant, so I too turned for home. By the time I arrived back at the caves, Felicity had finished exploring and taking photos 4,5 and 6. I went in and out of every passage I could find, and at one point (photo 8) reversed way back into a crevice several kayak lengths in depth.

The final photo was taken out the window of our motorhome after we had just finished dinner and a bottle of Argentinian Malbec wine. It’s a magical spot.

First thing in the morning we put on our damp togs and dived into the sea for a swim. The sea water is so warm this year.

We decided to beat the traffic again, so we left for home straight after breakfast and encountered no congestion whatsoever. After we had unpacked, eaten lunch and done some chores we had time to go for a swim at Long Bay with about 20,000 other people.