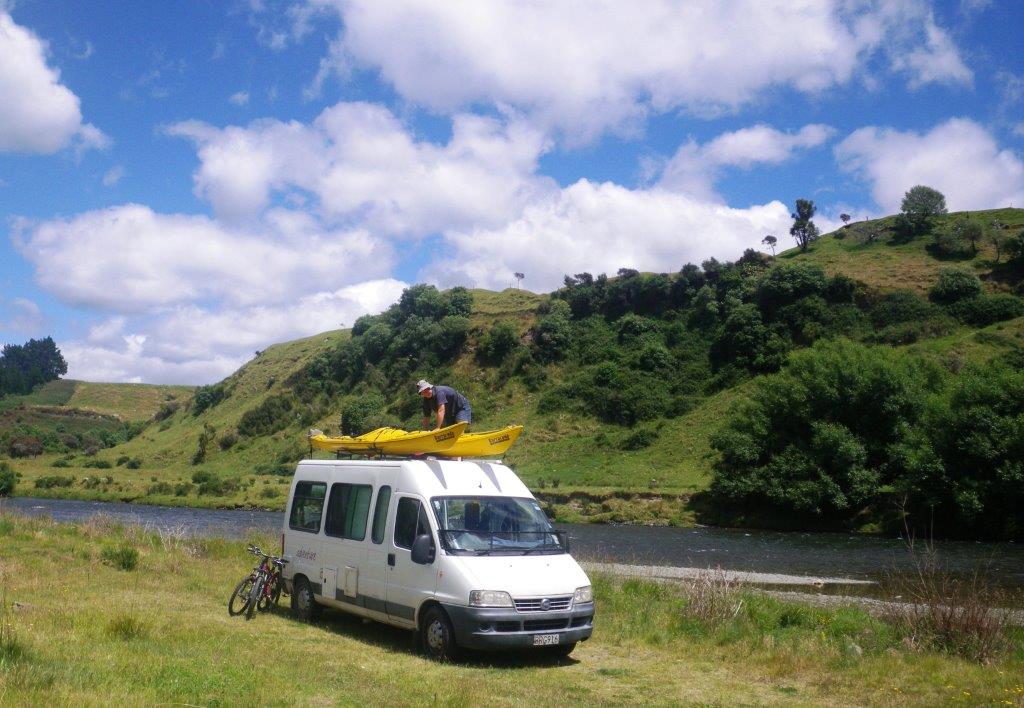 We spent the first night of our Christmas 2014 trip at Reid’s Farm, just before Taupo. Because it is free, it was pretty crowded, especially in the nicer areas with views of the Waikato.


We managed to find a flat and scenic spot amidst the tents, and set off for a walk down to see the Huka falls.

We tried to stay off the road as much as we could, but none of the paths continued along the river bank. It became obvious why when we saw bright green manicured grass along the side of the road, then a set of fancy gates with a sign saying “Huka Lodge”. Obviously the upper classes don’t want peasants like us spoiling their river view!

Finally we came to the beginning of a short Mountain Bike trail that led to the falls car-park. I had wondered about taking the bike off the van and having a ride, but there wasn’t much of the day left so I settled for a nice dinner and a couple of episodes of Breaking Bad on my tablet before bed.

We were on the road before 9.00 am, and drove for an hour or so along the Taupo – Napier highway before making a comfort stop at the Waipunga Falls lookout.

The long, high bridge over the Mohaka River must be in bad shape, because the highway had orange cones down each side with traffic lights limiting vehicles to a single lane. There were also big signs about the maximum weight of truck that should attempt the crossing, and warnings that even small trucks should keep 100 metres apart.

A few kilometres further on we found our turn-off, and headed down a minor road until we found the DOC Glenfalls Camp on the edge of the river. It was still only late morning, so Felicity made a picnic lunch while I unloaded the kayaks from the roof of the van.

I remember the Mohaka being a lot of fun to raft down, because the current is quite strong. Kayaking up was considerably more difficult, especially through the rapids. Several times we had to get out and pull the boats through shallow sections. We were travelling through a very pretty gorge, but there wasn’t much opportunity to stop paddling and admire the view.

After about an hour we passed through a narrow section where the current was particularly strong, and when I finally managed to get to a backwater and take a break I heard screaming behind me as Felicity got trapped in a whirlpool. I thought about trying to go back and help, but could only imagine whizzing past at great speed, if I managed not to crash into her. Luckily she managed to get under control, and when she caught up we decided that it was time to stop for lunch.

I had hoped to relax an the gravel bank and admire the beautiful bush on the cliffs above us, but we discovered we had made a significant mistake in our preparations by not bringing insect repellent. Aproximately 3,562,974 sandflies decided that it would be an ideal opportunity to have an early Xmas dinner, and as we had stripped off all our clothes and dived into the river to cool off they had plenty to choose from! We ate our lunch as fast as we could while we dried in the sun, then escaped down-river.

The trip home seemed like about 10 minutes, compared to the slog upstream against the current. We shot over all the rapids without any trouble at all, at thrilling speed. I was rather disappointed to see the van so soon.

That night was moonless and clear, and we were amazed by how many stars you see when away from civilisation. There was enough light that you could walk around out in the open without bumping into vehicles or tents.