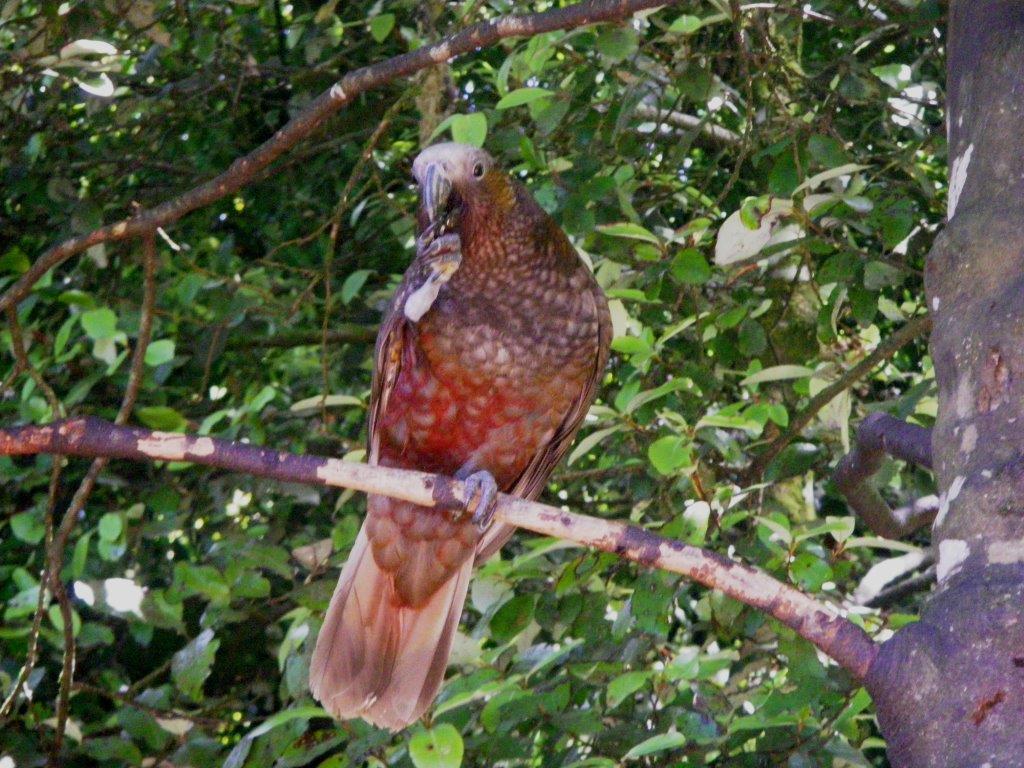 The seal on the back road to Napier ends soon after the Glenfalls camp, so it was a dusty drive, made worse by the occasional logging truck that made me careful to keep well to the left on the numerous blind corners.

After an hour or so we came to a high bridge over the Mohaka, with a sign informing us that this is the end of the public road. We think this is where we were picked up when we rafted down a few years ago.

Thanks to GPS technology we figured out that the road we should have turned down was about 10 km back, so we drove back past the dangerous sounding “Crocodile Pond” to the intersection.

The forestry and farmland became native bush, and it wasn’t long before we reached the Boundry Stream Reserve. Just as we were about to set off to explore I noticed to my annoyance that our so far unused awning was hanging down over the side door of the van. We asked Mark, the guy who used to hire this van out why he hadn’t fitted an awning previously, and he told us that “the tourists always rip them off on low trees, but I’m sure you will be more careful”. The branch that did it was so tiny I could hardly believe it, but then I remembered how a single punga frond can just about throw me off my mountain bike if hit the wrong way.

I had to download the bikes to be able to climb on the roof with some small lengths of rope to tie the awning back on, and as luck would have it an audience arrived in the form of two guys with the biggest camera I have ever see. The lens was almost a metre long, and it must have weighed several kilos. They told us they were bird photographers, and showed us some amazing shots of birds flying and feeding their chicks.

As I was climbing the ladder I was startled by a large bird diving past me, and realised it was a kaka. Soon there were about ten of them swooping around us, checking out the entertainment. It turns out that a small flock had just been released from an aviary and were still being fed to help them get established in the wild.

With the awning secured, we set off down the beautiful bush track. The area was logged almost a hundred years ago, and has been regenerating ever since. In recent years there has been extensive predator control, so there were heaps of birds.

This is one of the few places where the red flowering kakabeak still exists in the wild, as well as the native misteltoe, which unfortunately wasn’t flowering. The big tree behind me in the photograph is a matai that survived the logging.

On the way back to the road we noticed a flock of small birds nearby, and managed to make enough squeaking sounds that they came close to investigate. They turned out to be whiteheads, which are not often seen in the wild. When we talked to the photographers later they told us that they have recordings of all the native birds downloaded onto their phones, which makes attracting them a lot easier.

Before we left, we crossed the road to watch two DOC workers refilling feeding stations for the kakas. The birds were so used to humans that they were quite happy to hang out less than an arm’s length away from us.

The next stop we made was at the Opouahi Kiwi enclosure. This is a whole valley surrounded by a high predator fence, where small kiwi are able to grow big enough to have a chance of survival in the outside world. Once they weigh over 800 grams they can defend themselves from stoats. The enclosure has a pretty lake with a track around the edge.

After lunch we continued on to join up again with the highway, and it wasn’t long before we reached the campground at Lake Tutira. I unloaded the kayaks and we set off for a paddle around the lake. It was very pleasant being on flat water that wasn’t moving anywhere. On the way back we crossed a couple of shallow areas where we disturbed huge carp that splashed off into deeper water.

When we arrived back at the camp we jumped in the water for a swim, and were suprised that the water was almost warm, probably because the lake is fairly shallow. Interestingly, we found no outlet to the lake, and only a couple of small streams leading in.

After dinner we met the two photographers who were also camping there, and our list of places to explore got a bit longer as a result.