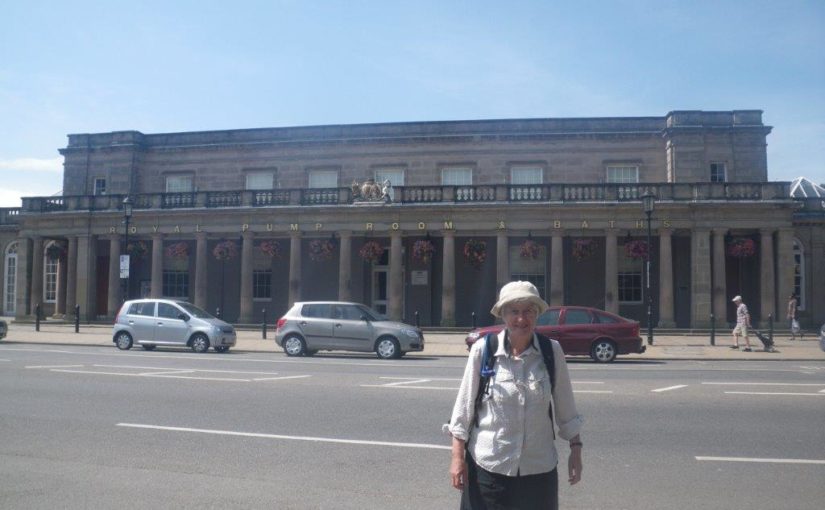 Although the Romans knew about the spring at Lamintone (meaning farm on the River Leam), it was lost again until 1784 when William Abbotts and Benjamin Satchwell, inhabitants of the village by then known as Leamington Priors re-discovered the medicinal qualities of the water in a well outside the local church.


When we arrived by train yesterday, my top priority was to have a taste of this special water, which we obtained from the sole remaining public drinking fountain outside the Royal Pump Room. I have to report it wasn’t enjoyable. Thankfully I have never been forced to drink my own urine but I imagine it wouldn’t be much worse. The water is naturally salty, and I strongly suspect the health giving properties owe more to brilliant marketing than any actual benefit.

Two hundred years ago the public were obviously suckers for this kind of thing, and the town and its new health spa industry boomed. Other entrepreneurs turned up and sunk bores along the main street, discovering half a dozen new springs.

In 1830, then Princess Victoria visited the town and must have enjoyed herself, because she granted the town a ‘Royal’ prefix in 1838 soon after she became queen, and returned for a second visit in 1858. This royal seal of approval facilitated the rapid expansion of Leamington, which grew from a population of 315 at the beginning of the century to 27,000 a hundred years later.

The statue of Queen Victoria that I am standing beside in photo 5 was shifted sideways by an inch on its plinth by a German bomb in WW2 and never repaired. If you look closely at my shoulder height you might see it is slightly nearer to me than it should be.

Although there are no ancient structures, the town is distinctive because nearly all the buildings are Regency architecture of the early 19th century. There was obviously a lot of work for wrought iron manufacturers in those days.

By the beginning of the 20th century the popularity of spa towns had declined, and all the bathing pools were gradually closed. The main activity promoted in the town these days seems to be shopping.

We wandered around the streets admiring the buildings, which were often decorated with hanging baskets of colourful flowers. We also strolled through a couple of huge arcades with glass roofs which would make the town a pleasant destination in bad weather. We ate our lunch in the attractive Jephson Gardens. These were badly damaged by floods in 1998, but there was no sign that we could see.

Since we still had some energy, we decided to walk along the Grand Union Canal towpath to nearby Warwick and catch the train home from there. In photo 6 we are on a bridge where the canal passes over a railway line, which is always a strange experience for those of us who expect watercourses to be at the lowest point of the landscape. The butterfly in the final pic is a small tortoiseshell.

On our previous visit to Warwick I had hoped to walk through Priory Park where I thought we would see the ruins of an ancient priory. After walking all the way through the park without seeing any sign of ruins, we talked to a very helpful employee of the Warwickshire County Record Office. She told us that the priory was demolished in 1546, and a mansion built in its place.

This in turn was demolished in 1925 when it was purchased by a wealthy American and shipped to Richmond, Virginia where it is now a museum. We also learned that the county records go all the way back to the 10th century and take up 4 kilometers of shelving!

One thought on “Royal Leamington Spa”