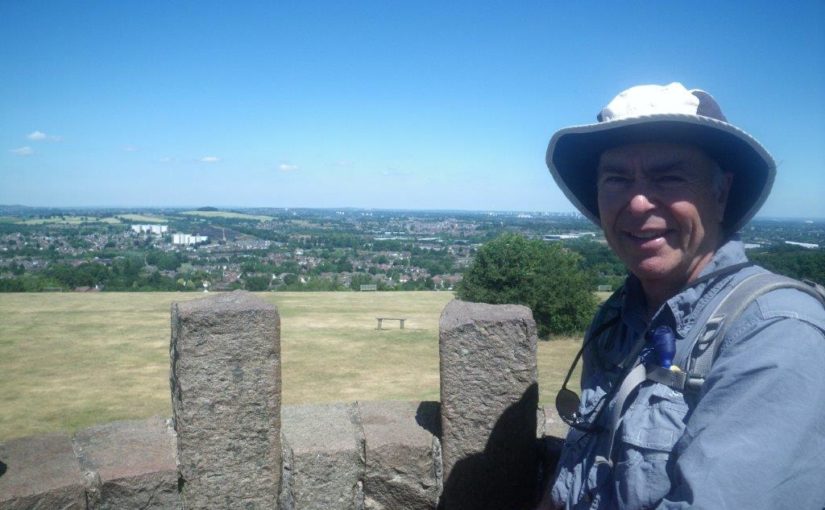 We’ve been for a couple of long walks this week that I’m going to combine in this post. The first was near Northampton, and the second not far from Birmingham.

Salcey Forest is an old estate where Felicity’s paternal grandfather lived. The forest itself is now a public park, but the house in the centre is private, surrounded by Salcey Lawn. To me it looked more like a farm than a lawn, with cows, horses, and even some crops. As Felicity’s grandmother was not the lady of the house (she was probably a servant), her father grew up with a foster family in a nearby village.

We took a train to Northampton, which was an important town in the middle ages but has declined steadily since then. There used to be a castle where the king sometimes lived, and where parliament was regularly hosted until 1380. Probably its biggest claim to fame was that it was the venue for the trial of Archbishop of Canterbury Thomas Becket in 1164. The castle fell into ruin, and is now the site of the railway station where we arrived, with only a relocated gateway to mark its existence.

A local bus took us out into the countryside and we got off at the end of the route in the village of Hartwell. From there it was only a few kilometers down the road, and across the M1 motorway before we came to the Salcey Forest. We walked in a loop through mostly oak and a few conifers.

In the 1970s Felicity used to stay with the family who had the logging rights, so she was pleased to see that extensive re-planting has preserved the forest so that it is now an attractive park. We had seen on the map that there was a fantastic tree-top walk, but unfortunately it was closed in May this year when inspectors discovered rotting timbers. Locals have started a petition to get it repaired because they fear it will be torn down. We had to console ourselves with a see-saw in the kid’s play area.

We managed to get a few glimpses of the “lawn” across the fence, but couldn’t see any of the main estate buildings. There were many huge oaks in the paddocks that are probably centuries old because this area was not included in the logging rights.

There are several ancient “druid oaks” in the forest, but the only one we passed, named the Church Path Oak, fell down in the late 1990s. A sign informed us that William Henry, the 6th Duke of Grafton, used to rest under this tree on his way to and from Piddington Church. The duke died in 1882, so it must have been a pretty old tree.

Last time Felicity visited the main gate to the estate it was boarded up, but nowadays it has been converted into modern housing. She ignored the “Private Road – No Access” sign and walked in to have a closer look, while I waited outside.

This range of hills used to be a royal hunting reserve. In 1888 part of it was opened to the public, and the county park was expanded over the years. One of the biggest hills was donated by the Cadbury family, who made their fortune manufacturing chocolate in nearby Bournville.

The nearest train station is at Barnt Green, where there is an entrance to the park just across the road. We took one of the longer routes, up to the visitor’s center then around most of the boundary.

The most interesting spot was Beacon Hill, which used to be one of the sites where a nationwide network of huge iron baskets filled with wood could be lit to alert the country to an impending invasion. A tapestry woven in 1588 shows this beacon warning the everyone about the arrival of Spanish Armada.

Even during the 2nd World War the hill was a place where Royal Observer Corps aircraft spotters were located to watch for German air raids. Other sections of the park were used in the 1st WW for testing guns and ammunition.

Nowadays the summit of Beacon hill has a sort of mini-castle with a toposcope. This was built to commemorate the gift of land by the Cadburys. The toposcope is a circular metal disc showing all the features on the horizon. Unfortunately much of the view to the south in particular is now screened by trees, although we had a great view of Birmingham in the north and the Dudley area in the north-west.

I was also interested to learn that this place is on the dividing line between the watershed of the Severn and Avon Rivers, which drain to the south west into the Bristol Channel, and the Trent River which flows north east and empties into the North Sea.

On the way back to Barnt Green station we walked over Bilberry Hill. I had seen a display in the visitor center showing a sort of small rake for harvesting these berries, with a note that they used to be used for making jam. We hunted around and discovered some tiny blue berries with red juice when you squeezed them. They tasted quite nice, but they are so small it is hardly worth the effort of harvesting them. I suspect if you were in a survival situation you would use more calories collecting them than you would gain.