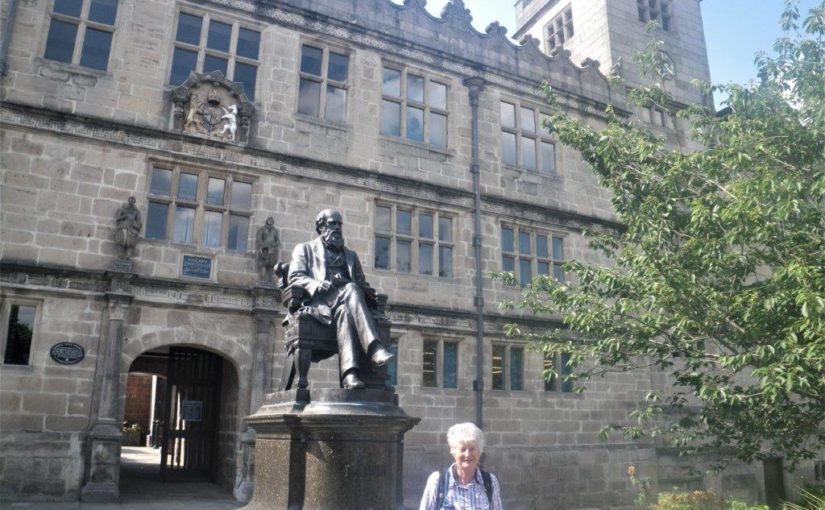 On our way to Ludlow a couple of weeks ago, we passed through the town of Shrewsbury on the train, and thought it looked interesting. When we learned that it has over 660 listed historic buildings we decided it would be a good destination for our final adventure before we head back to London tomorrow.


Shrewsbury was once the capital of the Welsh Kingdom of Powys, which was established after the Romans left Britain. At that time it was known as Pengwern. There was constant warfare with the Angles to the east and it changed hands many times until about 800 when the River Severn became the border of England and Wales, and the town fell under Anglo-Saxon control.

Soon after William the Conqueror arrived in 1066 the Welsh made a final attempt to regain Shrewsbury by besieging it, but the Normans prevailed. William gave the town to Roger de Montgomery who first built a castle and later founded the Benedictine Shrewsbury Abbey.

The castle is right beside the train station, so that was our first stop. The town is surrounded almost completely by a loop in the River Severn, so the castle is built at the narrowest point which provides the only easy access.

We started by inspecting Laura’s Tower on the highest point of the castle mound, but subsequently discovered it was not part of the defenses. It was actually built as a “folly” in the late 18th century by Tomas Telford for the daughter of Sir William Pulteney.

The castle is pretty small as castles go, but it contains the Shropshire Regimental Museum which has displays of military equipment dating from the 18th century. The regiment seems to have been involved in just about every international conflict since that time. I was struck by how long it took them to figure out that dressing soldiers in bright red jackets was a bad idea.

As we walked through the streets and narrow lanes, we saw a good selection of historic buildings, some of them leaning at rather alarming angles out over the roadways. Eventually we arrived at the old Market Hall, where a ukulele band was entertaining a crowd. We stopped to listen and were delighted to find that the next act was a bunch of Morris Dancers.

One of my main ambitions for the visit was to eat a genuine Shrewsbury Biscuit. We looked into more than a dozen cafes and all around the new indoor market, but could not find anything. When Felicity searched Google later on, we discovered that what we call Shrewsbury Biscuits in New Zealand is known as a Jammie Dodger here in the UK, and the genuine article is more like a small bun or cake with dried fruit.

By this time we were getting hungry, so we continued south west until we came to a large green park on the banks of the river. We were entertained by a dragon boat race as we ate our lunch. Across the river we could see the exclusive (and expensive) Shrewsbury School where Michael Palin from Monty Python was educated.

There is a tourist boat which cruises slowly around the town, leaving from the Welsh Bridge in the west and turning around at the English Bridge on the eastern side. It was nice to be out of the sun in the hottest part of the day, and we learned a bit of the town’s history on the way.

After the ride was over, we headed back to our lunch spot, with a detour through “The Dingle” on the way (photo 9). This was once a quarry where some of the stone used to build the town came from, but now it is an attractive garden with ponds and fountains.

While we were eating lunch we had noticed a large wooden post with an iron hook at the top (photo 10), and had wondered what it was for. As we passed on the boat we learned that it once had a chain fastened to it which was used by a ferry in this spot. The ferryman could pull his boat to the other side without getting swept downstream.

We continued east and crossed the Greyfriars Footbridge to visit Shrewsbury Abbey (photo 11). This was once a huge complex, and one of the most important abbeys in England. At first the abbey struggled to get sufficient funding, but in 1137 an enterprising Prior named Robert imported the remains of a previously obscure Welsh Saint named Winifred and had her interred in the building. Several miracles then occurred and from then on the abbey became a significant place of pilgrimage for the followers of the cult of St. Winifred.

During the reign of Henery VIII in 1540 a large section of the main building was demolished, and the abbey steadily declined in size. In 1836 Thomas Telford built the new Holyhead Road (now the A5) through the grounds, destroying the remaining cloisters.

On our way back to the town we passed through the old wall via Traitors Gate (photo 12), at the bottom of St Mary’s Water Lane. It was opened for Parliamentarian troops during the civil war of 1645, allowing them to take control of the town. It was completely hidden by ivy and rubbish until restoration work was done in 2016.

At the top of the lane, St Mary the Virgin’s Church is famous for its collection of magnificent medieval stained glass. Some of the glass came from German and Dutch churches, and some from local churches which collapsed. St Mary’s is a “redundant” church, no longer used for regular services, but is now owned by a conservation trust dedicated to preserving it as a historic building.

The spire is the third tallest in England, but in 1894 the top section of it collapsed and destroyed the church roof. This has since been repaired, with new beams but most of the original wooden decorations. There are angels playing musical instruments, including one of the earliest known depictions of a harpsichord.

We ended our visit outside the Shrewsbury Library, formerly the high school before it moved across the river opposite our lunch spot. There we found a statue of the town’s most famous son – Charles Darwin, who recieved his secondary education in this very spot. The distinctive round St Chad’s Church in photo 8 is where he was baptised and attended when he was young.