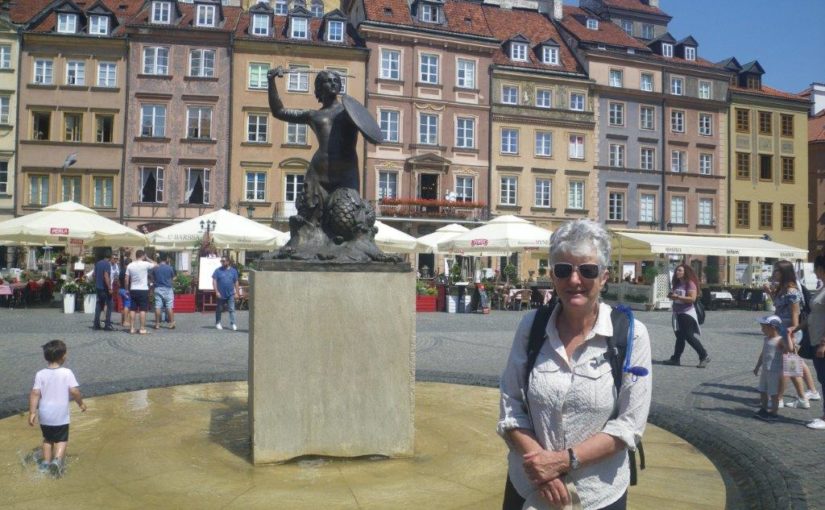 The capital of Poland is a very different scale to any of the other cities in the country, all of which are under a million people. The population of “Varsharva”, as the locals pronounce it, is over 3 million. This makes it the 8th biggest city in the European Union, and it has one of the highest numbers of sky-scrapers.


Our apartment was on the 22nd floor of one of these high-rises, so we had a great view over the old city to the north. The bus trip from Lodz only took a couple of hours, so after dropping our bags we set off for a long walk along the Vistula river to the south.

On our way we were distracted by a display of Eastern Block military equipment, mostly Soviet, but some from other countries that were once behind the “Iron Curtain”. We continued through a couple of the city’s extensive parks. Most of Warsaw was destroyed by the end of WW2, and due to the numerous modern apartment blocks almost a quarter of the city is green space. Our guide next day claimed that up to 10,000 wild boars live within the city area!

When we reached the river bank the first sight was one of the “beaches” within the town. Felicity had forgotten to pack a towel and swimsuit, but I had my gear with me and was very tempted to jump in the water to escape the 30° heat. However, while there were lots of locals lying on the sand getting a tan, I could see nobody was in the water and when we got close our noses told us why. The river is obviously where all the sewerage treatment systems discharge so I stayed hot and sweaty.

It was quite easy finding our way home, because the huge Palace of Culture and Science was nearby. This building was built by Stalin in 1955 as a gift to the Polish people, and although many locals would like to see it torn down it is one of the most distinctive sky-scrapers in the city.

The next day we walked to the Old Town and joined a walking tour. I was surprised to learn that Poland was once a medium sized empire. The earliest records go back to the 10th century, but in 1569 the Polish–Lithuanian Commonwealth was established. In the 17th century the Poles invaded Russia and even occupied Moscow for a few years. The son of Polish king Sigismund III was briefly elected Tsar, but the local nobility insisted that he convert from Roman Catholic to Russian Orthodox which his father would not allow so it was back to fighting.

Sigismund was son of the Swedish king, and at times of civil war Poland was occupied by Swedish troops. We learned all this standing next to a huge column with a bronze statue of Sigismund with a cross in one hand and a sword in the other. It was very controversial when it was first erected, because until then only religious figures could be raised above the ground like this. The church eventually dropped its opposition on the condition that it be outside the city walls, so it was built a few meters from the boundary.

There was a local legend that while Sigismund’s sword was raised the city would be safe from invasion. Apparently, at the beginning of WW2 a German missile knocked the statue from it’s pillar, and the Nazis were able to sucessfully invade.

Almost none of the old city buildings date to pre-war times. When the Soviets first occupied the country they were not confident of their ability to keep the population under control, so they allowed the re-building of churches and the castle in medieval style. You can tell that some buildings foundations are original because they are marked by numerous bullet holes (photo 7).

In August 1944, with the Red Army only a few kilometers away, the Warsaw uprising began in the hope that the city would be back under Polish control before the Russians arrived. Because of the long history of conflict between the two countries, the Poles were not keen to replace one occupier with another. The uprising lasted for 63 days, partly because the narrow streets of the old city prevented German tanks from entering.

The enterprising Nazis invented a remote controlled vehicle called a Goliath which was a small tracked vehicle containing about 100 kg of high explosive. Controlled by trailing wires, the vehicle could be driven up to a building or bridge then detonated remotely. After the uprising was suppressed with the aid of these machines, Hitler ordered the entire city to be razed to the ground.

One small section of the medieval city wall survived, part of a barbican at the main gate. This is what Felicity is standing beside in photo 8.

Photo 10 shows the narrowest house in the city. When it was built, property tax was based on the street frontage, so the architect designed a building that was only about a meter wide. It expands as it goes back, so that the rear wall is normal proportion.

In the middle of the main square is a statue of a mermaid – the symbol of Warsaw. This is unexpected in a city so far from the sea, but the guide gave us an interesting explanation. Once upon a time two mermaid sisters lived in the middle of the Baltic Sea, but after a terrible argument they decided to separate. One sister swam west and ended up in Copenhagen, but the other traveled south and up the Vistula river, where she was caught in the net of a fisherman near Warsaw.

While he was trying to decide whether his catch should be taken to the kitchen or the bedroom, the mermaid made the mistake of singing her siren song in an attempt to bewitch the man. Unimpressed by the song, he saw a money-making opportunity and imprisoned her in a cage so that he could charge people to listen to the singing creature.

In the end, the mermaid was released on the condition that she protect the city, which explains why she is always depicted with a sword and shield. Sadly it seems that the Nazis were immune to her power.

The final part of our walk entered the area where the Warsaw Ghetto was once the largest in Europe. Over 400,000 people lived in an area of less than three and a half square kilometers. This meant an average of over nine people in each room, living on a couple of hundred calories per day.

In early 1943 there was an uprising by a few thousand poorly armed Jewish fighters. They held out for over six weeks before the Germans could regain control, which they did by systematically destroying every building street by street. It took the Nazis less time than this to conquer the whole of France, Belgium, Luxembourg and the Netherlands!

The few surviving Jews were forced to destroy any remaining traces of buildings, so the entire ghetto was effectively a desert by May 1943. A decade ago, metal markers were installed showing the ghetto boundaries – Felicity is next to one in photo 5.

When the tour was over we followed the guide’s recommendation and enjoyed an unadvertised fixed-price lunch at a restaurant just outside the old town. It was still stinking hot so we decided to visit a museum housed in a group of eight restored houses on the edge of the market square.

In photo 12 you can see a couple of fancy looking penthouses at the top level of the museum buildings – these are not actually rooms at all, but structures for allowing light into the stairwells. The exhibits included lots of impressive silverware, pottery and glass bottles. There is also the original mermaid statue.