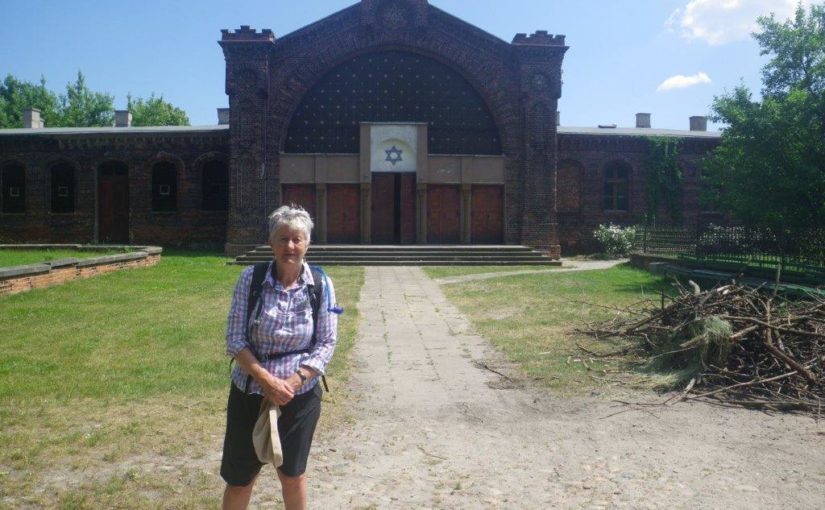 As Felicity’s mother’s family lived in a town just outside Lodz before they emigrated to the UK around the turn of the 20th century, we decided to see what we could learn about the place while we are visiting Poland. Lodz (pronounced Woodge) is the country’s third largest city, with a population of around 700,000.


I also have a connection to Lodz – back in the early 1980s I used to buy felted woolen hat bodies from a manufacturer here. In those days international trade was carried out by telex and letters-of-credit, which was quite a bit more complicated than using a card on the internet.

We used up most of a day catching a bus from Krakow, but we had time in the evening to go for a walk up and down the main street which is mostly free from motorised vehicles. We enjoyed seeing the numerous bronze statues of famous people, but as the identification is only in Polish we are none the wiser about who they were. We were also impressed by numerous gigantic murals on the side of buildings.

After breakfast this morning, we walked to the Jewish Cultural Centre, where a helpful woman named Marta looked up the list of Ghetto inhabitants during the early 1940s, and the records which show who is buried in the huge Jewish cemetery nearby. We found several mentions of the name Jarochowski, who we figured are almost certainly related.

Our next stop was The Marek Edelman Dialogue Center which has displays about the city’s Jewish heritage. By the end of the 19th century, when Lodz was part of Russia, Jews made up over 30% of the population. It was about this time that Felicity’s grandfather decided that the family would be better off in the UK.

This turned out to be a good decision, because when the Nazis invaded in 1939 all the Jews in the surrounding area were rounded up and imprisoned in the Lodz Ghetto, which became the second largest in Europe. Of the 223,000 Jews in Lodz before the invasion, only 10,000 survived the Holocaust.

We briefly explored the surrounding Survivors Park, and climbed a spiral path to the top of the Memorial Mound.

The ghetto once began just over the road, but there is almost nothing to see because the area is now modern apartments. We eventually came to a high wall which surrounds the nearly 100 acre cemetery, and walked around it for a kilometer or so until we came to the gate.

Felicity had the names and grave numbers of the most likely family members, so we paid a guide to find them for us. Some of the graves and tombs are well cared for, but large areas are overgrown and difficult to access.

We stopped to admire the mausoleum of Izrael and Eleanora Poznanski which is probably the largest Jewish tombstone in the world. The domed ceiling had a beautiful mosaic with pictures of date palms.

On one edge of the area is the ghetto field, where around 43,000 people were buried during the Nazi occupation. The graves had new labels added in the 1980s, but they have not withstood the test of time and it was difficult to find the number we were looking for.

We walked back into town for lunch, after looking in at several local bakeries and discovering that they mostly sell sweet buns, doughnuts and cakes. There are also enormous numbers of ice-cream shops, and you can’t go far before you see a 24hr “alkohol” outlets. Clearly there is a significant demand for vodka at 4.00am in Poland.

Our final stop of the day was a textile museum at the White Factory. There was an interesting display of weaving and knitting machinery which was started up for us to admire and listen to. The operator told us that in the original factory the sound level was over 120 decibels.

We also saw a temporary exhibit of woven textile art by Magdalena Abakanowicz, which was extremely impressive. Both of us would have been happy to live with any of the beautiful creations on display. There was a third section of the museum that was supposedly interactive, but we thought this was trying a bit too hard and a waste of resources.

I was a bit disappointed that I didn’t learn anything about the Jewish contribution to the textile industry (Felicity’s relatives were bespoke tailors), or anything about wool felt hat manufacturing. The museum has yet to fulfill its potential in my opinion.