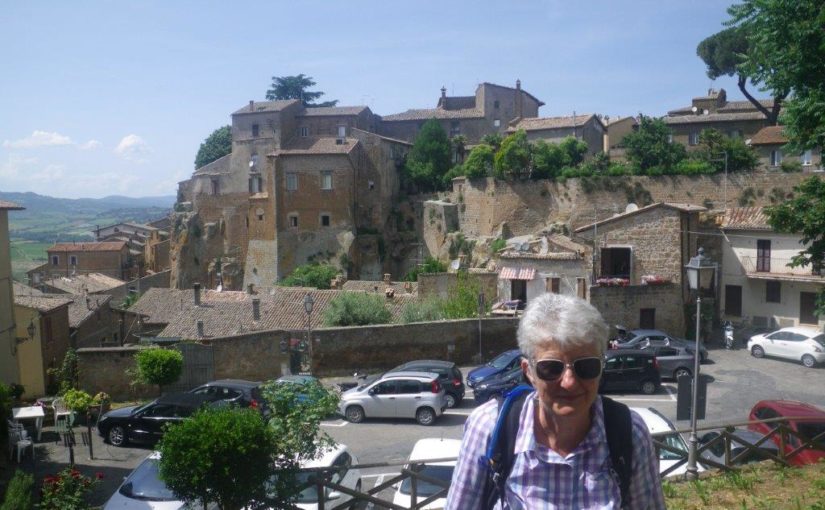 Our instructions for getting from Orvieto train station to our accommodation were to take a taxi, because the town is over a hundred meters up on top of a steep cliff. When we asked a taxi driver to take us however, he told us that the road was closed for the day because of a “celebrazione”. Fortunately, there is a funicular railway as an alternative.

Our trip from Warsaw took a lot longer than expected, because our original flight via Vienna was cancelled due to severe thunderstorms. We were re-booked a couple of times, but these flights were delayed, and we ended up having to fly all the way to Paris before returning to Florence where we arrived in the middle of the night.

The streets of Orvieto were crowded with people waiting to see the annual Corpus Christi parade. We had just enough time to wheel our suitcases down the main street and stash them in our room before security closed the street completely.

We had seen the end of a small parade in Warsaw, but the Italian version was on a vastly larger scale. It took over an hour to go past, and must have involved almost every male in the town. Traditionally, there was no female involvement, but we learned that recently women have been making their own parade, and a few joined in with the men that we watched.

It took over an hour for the parade to pass us, and we felt a bit sorry for the participants carrying heavy banners, and dressed in heavy robes and sometimes metal headgear, because it was a very hot day. There must be a whole warehouse somewhere to store all the traditional costumes and accessories. I took five short videos which should play continuously if all goes well.

After a quick lunch we set out to explore the town. Our first stop was the Pozzo della Cava. The city was originally built by the Etruscans around 700 BC, because the high cliffs made it easy to defend from invaders. The cliffs are made from volcanic tuff rock, which is easy to excavate, so it wasn’t long before the Etruscans began digging deep wells to obtain water from the base of the cliff without having to climb down the outside.

Some of these wells are 60 meters deep, and it is still unclear how oxygen was supplied to the diggers at the bottom. There has been a lot of archaeological work done in the last couple of decades, and it is known that there are over 1,200 tunneled caves under the houses. The “owner” of each cave is the property where the entrance is found.

The caves were also used for workshops of various kinds, because land on the surface was limited. As the temperature underground is constant, the spaces were ideal for making olive oil and wine. The rock that was dug out was used for building on the surface, so many of the tunnels began life as quarries.

At some point the city authorities made every householder dig a deep pit for rubbish to stop people chucking stuff over the cliff. This provided a treasure-trove for archaeologists, and we were able to admire beautifully decorated broken pottery that was manufactured over two and a half thousand years ago.

We spent several fascinating hours exploring the narrow, winding streets and alleys, until we arrived back at the impressive Duomo (cathedral). The town became famous in 1263 when a miracle occurred in a nearby town – drops of blood appeared on the consecrated bread and dripped onto the cloth holding it. This is now preserved in the cathedral.

After a short rest in the main piazza, we joined a tour of the Orvietto underground, which explored more of the cave systems. Many of the caves near the outside of the cliffs were used as dovecotes where pigeons were raised for food. Nowadays pigeon is still a popular dish, but they are farmed more conventionally down on the plain below.

When we arrived back at the cathedral we discovered that a symphony orchestra had set up to play a concert. We listened to a couple of singers performing selections from West Side Story before heading off to find a much needed espresso.

Felicity did some research and found a local trattoria where we could try the local specialties. A sign on the door informed us that it is listed in the Michelin Guide which is probably a first for me. We ordered truffle tagliatelle, where the waiter comes to the table and grates the expensive delicacy in the general direction of the pasta so that you can see what you are getting. We spent the rest of the meal picking specks of delicious truffle off the tablecloth.

We also ate some wild boar tagliatelle which was very nice but not particularly gamey, and of course the local pigeon. Italian food is a lot more interesting than Polish, so I look forward to some great meals over the next week.

When we finally made contact with the tour company that is organising our walk, we discovered that we weren’t meeting until midday so we had a few more hours to explore. This was very fortunate, because we found several more amazing sights.

Near the main gate Porta Rocca is the Fortezza Albornoz. Originally it had a moat and a drawbridge, but now it is an attractive park, with awesome views out over the valley where the main road and rail lines link Florence with Rome. Nearby is the remains of a Roman Temple, built on the site of an Etruscan Necropolis.

St Patrick’s Well near the funicular is a huge cylinder 53 meters deep, constructed over ten years from 1527. Pope Clement VII moved to Orvieto after Rome was sacked by the imperial army, and wanted to be sure of a good water supply in case the town was besieged. The well is 13 meters wide, and has a double spiral staircase to the bottom, wide enough for donkeys to walk down and back carrying water. There is still plenty of very clear water at the bottom, which looked clean enough to drink.

Further along the winding roads we came to Il Labirinto di Adriano, which was accidentally discovered 40 years ago by the owner of a pastry shop doing some renovations. Adriano spent the next 20 years excavating, and now there is around 400 square meters of Etruscan tunnels and cisterns. His daughter-in-law kindly agreed to take us down, even though she was very busy preparing for a big group of lunchtime guests at their restaurant.

Down at the lowest point, 20 meters below street level, we could see the remains of a fossilised tree which got covered with lava around 250,000 years ago. The family use the cellars to store hundreds of bottles of wine, which can not be sold because of modern EU regulations. They do have wine-tasting events in the cellars, where people can try bottles over 40 years old. I asked what percentage were spoiled die to leaking corks, and she said that she didn’t know the percentage, but that some wines were very good while others went up to the kitchen to be used in cooking.