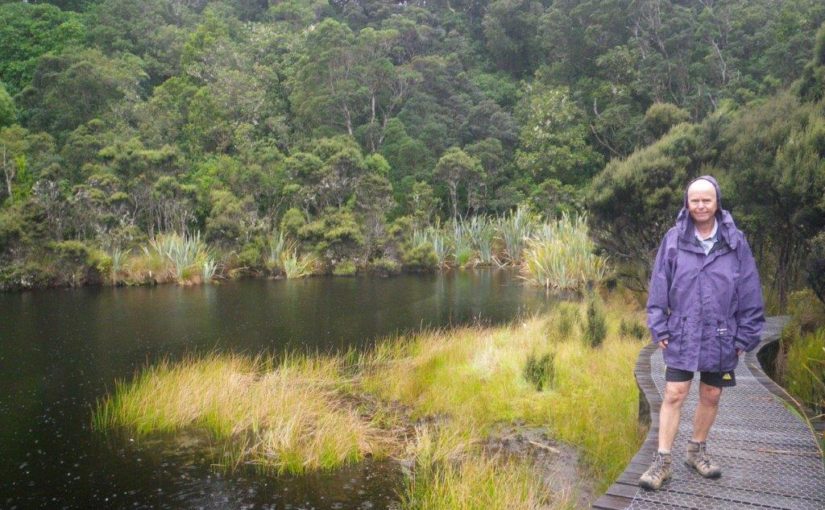 Because the weather was forecast to be wet, we planned to head out for a day trip and return to Curio Bay, but we changed our minds about mid-afternoon and ended up at Pounawea instead. The motor camp is on the edge of the Catlins River surrounded by mature bush, and there is more bird song than we have heard anywhere on our trip so far.

Our first stop for the day was McLean Falls. This involved a half hour walk through the bush to see the 22 meter drop. The bottom section runs through a narrow chute, but with too many obstacles to make sliding down an attractive proposition.

Not far away, a couple of kilometers up a windy dirt road is the carpark for the Cathedral Caves. The access is over Maori land, but they only charged us $5.00 each which seemed quite reasonable. We had to walk about a kilometer down a well-made path through beautiful coastal forest, then a few hundred meters along the beach below.

The caves are only accessible a couple of hours either side of low tide, because they were made by the sea smashing into a weak section of the cliffs. Repeated rock falls from the roof has made them quite high. Originally there were two separate caves, but as they were extended back into the hillside at different angles they eventually joined up. The total passage length is almost 200 meters, making it one of the 30 longest sea caves in the world.

We missed the turnoff to our next planned destination, and the first place it was possible to turn was at the start of a 30 minute walk to Lake Wilkie. This was once an open lake behind sand dunes, but over the years it has filled with sediment and the forest has encroached, and is now technically a bog lake. Informative signs demonstrated the transition zones – from moss and sedges at the lake edge, through tea-tree and water tolerant shrubs a bit further away, and eventually to mature podocarp forest.

Back the way we had come was turn-off to the Tautuku Board Walk. This has been built at the site of an old timber mill, and all along the approach road we saw wooden signs with information about the families whose houses used to be there. There were also a few foreign trees, including a big patch of holly. The track to the board walk goes along part of an old coach road and down the remains of an abandoned rail bed that was used for hauling logs to the mill.

Down at the Fleming River, a boardwalk extends out into the mudflats through attractive jointed rush (oioi) which dries to a golden colour and was much prized by Maori. We kept a keen eye out for the fernbirds which live here, but they were not obvious.

Florence Hill lookout seemed like a nice place to stop for lunch, with spectacular views over Tautuku Bay. There is a walkway to from here to some “spouting caves”, but it was raining pretty heavily by this time and we had had enough of being cold and wet. While we were sitting eating, a huge flock of sheep were herded through the carpark by a farmer in a ute and a couple of dogs. When set off again we encountered them on the highway, and had to drive slowly for a few hundred meters while we passed them.

After a brief stop at Owaka to empty our waste tanks and fill up with water and diesel, we continued north to Tunnel Hill. A railway from Balclutha to Owaka was built in 1892, and it ran through a tunnel under the hill just before the end. It was dug completely by hand using picks and shovels for less than £10,000 – even the bricks were made nearby. The line closed in 1971 so now a short walk allows tourists to admire the workmanship.

One thought on “Catlins Coast to Owaka”