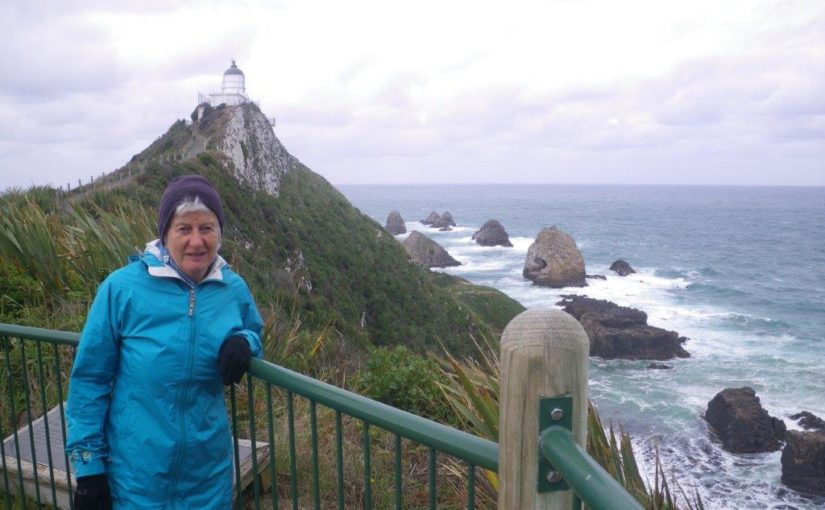 A little way south of the Catlins River is a place named Jacks Bay, which has a spectacular blowhole. We set off to visit it straight after breakfast while the tide was high.

The blowhole is about 20 minutes from the car park at the end of a track up a gully lined with coastal bush. It is surrounded by flax and other shrubs, so we could hear it before we saw anything. At one end there is a viewing platform where we could look down.

It wasn’t quite what I had imagined (water spouting into the air), but impressive none-the-less. It is actually a sea cave which has had a large section of the roof collapse, allowing us to see the surf 55 meters below. The viewing platform is 200 meters from the sea in the middle of the bush, which made it quite a sight to see huge waves crashing through from the intact part of the cave.

Our second stop for the day was at Nugget Point, where there is yet another lighthouse. We joined dozens of other tourists on a walkway cut into the steep cliffs. Far below we could see families of seals resting on the rocky coast, with some pups swimming in a large rock pool.

There is a viewpoint from which we could look down on some white birds nesting on inaccessible rock stacks. A sign informed us that they were Royal Spoonbills, which we wouldn’t have recognised without binoculars. Out at the end of the point we were exposed to a howling gale blowing straight from the Antarctic, so we didn’t linger very long.

Back down the road there is another track down to Roaring Bay, which has a hide for watching penguins on the beach below. Unfortunately in the middle of the day they were all out fishing – they swim up to 25 km off shore and dive to 80 meters down in their hunt for food.

We drove north along the coast, past Kaka Point. Just past here is the site of Port Molyneux, which turned into a swamp after a huge flood in 1878 allowed the Clutha river to break through a sandbar further up the coast to the north.

In Balclutha we filled up our gas bottle and visited the supermarket to stock up with provisions. We were both interested to see the new mouth of the Clutha, so we drove out through Kaitangata and up the coast. It was a bit of a disappointment, and we ended up quite a way north before we found a scenic spot to stop for lunch.

Heading inland, we got as far as the old gold mining town of Lawrence where we checked out Gabriel’s Gully and decided to stay for the night beside an attractive lake. We managed about an hour’s walk around the DOC reserve, but decided to save a longer trail for tomorrow. We are expecting a very cold night!