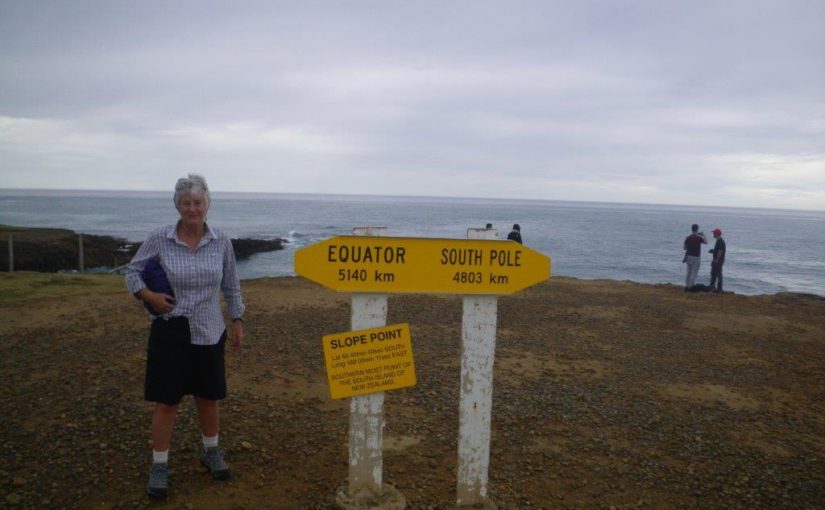 If I had been asked a week ago where the southernmost point of the South Island was, I would have guessed Bluff, but in fact it is a place called Slope Point, a bit further east on the edge of the Catlins.

When we looked at the weather map in Queenstown, we figured that the least wet place was likely to be the east coast, so we decided to head for Curio Bay. When we reached the sea at Fortrose however, and saw a line of campervans on the edge of an attractive estuary, we changed our minds and stopped there for the night instead.

Fortrose is at the mouth of the Mataura River, which is apparently one of the best brown trout fisheries in the country. People also catch salmon, and we passed lots of whitebait stands. There were a couple of guys pulling a net along the edge of the estuary, and when we went to see what they had caught they showed us four big flounders. Europeans first arrived in 1834 to set up a whaling station, and we saw one of the huge iron pots in which they used to render the blubber into valuable oil.

There used to be a wharf in the days when most transport was by sea, but the port became redundant when a railway to Bluff was built nearby at the end of the 19th century. Now there are only a couple of posts in the mud to show where ships once unloaded. At low tide we saw the remains of the ship-wrecked “Ino” out in the middle of the estuary.

There was a sign warning us that the coast road to Curio Bay was all metal, and subject to delays due to road works, but next morning we ignored the advice and set off. We detoured a few kilometers down a side road to see the Waipapa Lighthouse, and discovered that it is the same wooden design as the Pouto Point Lighthouse that we visited back in January.

The Waipapa light was first commissioned in 1884, following New Zealand’s worst shipwreck three years earlier. The passenger steamer Tararua was en route from Dunedin to Melbourne when it struck a reef that we could see extending out from the point. 131 of the 151 people on board were drowned, despite the fact that it was only a few hundred meters from the beach. We visited a mass grave site where many of the washed-up bodies were buried.

All the lighthouse-keepers’ houses are long gone, but we could see groves of macrocarpa trees that had been planted to shelter them. We could tell from the enormous trunks that they were quite old, but they were so stunted by the wind that they were less than 10 meters high, instead of the 40 meters that they can reach in sheltered positions.

As we walked along the beach below the lighthouse, we came across a sea-lion resting on the sand. It didn’t seem too bothered by the stream of tourists, although they can be dangerous if frightened. As the tide was out, we walked out on to the rocks to look at the huge bull kelp washing in the surf. Not far from the coast we could see Ruapuke Island, with Rakiura / Stewart Island on the horizon.

Our next stop was at Slope Point, where we ate lunch then walked across the paddocks to visit the southern extremity of the NZ mainland. There is another small lighthouse here, and the mysterious remains of some military-style security fencing which was obviously mostly removed many decades ago.

We were pleasantly surprised to discover that the metal road has now been sealed almost all the way, until we came to the section where the road builders were still working. We had to wait for almost half an hour before they let us continue. A woman in a campervan at the start of the queue got bored and walked down the line of vehicles giving everyone chocolate Easter bunnies, which provided a bit of entertainment.

At Curio Bay we checked into the campground and put a load of washing into their machine. We walked along the beach looking out for the Hector’s dolphins which breed in the bay, but we were out of luck. On the way back we passed through a penguin nesting area, but we didn’t see any of them either. DOC notices warn people to stay 10 meters away from seals or sea-lions, but 50 meters from penguins, so they must be particularly dangerous.

There is a viewpoint from which you can see the remains of a petrified forest, which grew along the coast of Gondwana about 180 million years ago. Now the area has been covered by sea, but at low tide you can see fossilised tree stumps, fern fronds and leaves.

One thought on “Waipapa Point and Curio Bay”