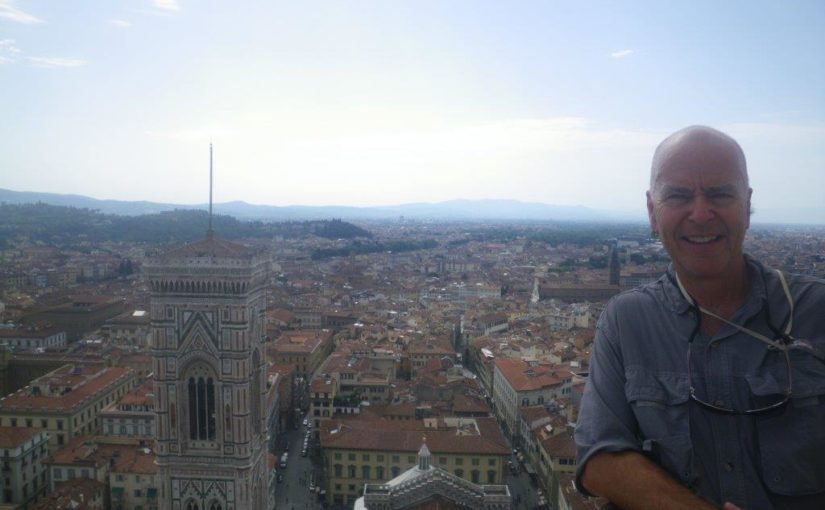 There is so much to see in Firenze, as the Italians call the capital city of Tuscany, that we are spending a couple more nights here before leaving Europe. Getting here from Siena wasn’t as straightforward as we had hoped, because our train unexpectedly terminated at a place called Empoli, and we had to take another 20 minute train ride to get into the city.

Yesterday afternoon we went on a walk to the west side of the city to visit the Jewish Synagogue. It was built in the 1870s, so it is not particularly old by Italian standards. It is however one of the largest in southern Europe, and as it is decorated in Moorish style it is pretty interesting. Inside, every surface is covered in geometric Moorish patterns. In many ways it looks like a mosque.

There have been Jews living in Florence since Roman times, making them one of the oldest continuous Jewish communities in Europe. Their fortunes have waxed and waned depending on the political climate. From the early 1400s the powerful Medici family allowed them to loan money and open banks, but in 1571 they were confined to ghettos as they were in other parts of Europe. In 1799, emancipation came when Napoleon occupied the city, and in 1848, the ghetto was abolished.

We walked back past the Basilica di Santa Croce di Firenze. It is the burial place of Michelangelo, Galileo, Machiavelli, and the composer Rossini. There is lots of valuable artworks inside. In the evening we walked to a nearby market and ate Florentine grilled steak for dinner. Traditionally you are supposed to order a T-bone, but the minimum weight is 1 kg and Felicity thought it was too much, even for two people.

This morning we went on another walk to see the Sant’Ambrogio Market. This is mostly for locals, and is filled with delicacies from all over Italy, and particularly Tuscany. It is mind-boggling how many varieties of cheese and preserved meat there are here. We also saw an entire stall devoted to different types of biscotti.

Back near home, we found a street stall selling the now trendy lampredotto (tripe) sandwiches. It is slowly simmered with tomato, onion and celery and served with hot salsa on a crusty bun. Delicious, and quite different to traditional tripe & onions in white sauce.

The queues for the Duomo stretch for hundreds of meters, so Felicity booked a tour which allows you to waltz straight in. We were also allowed in several areas where most tourists aren’t. My first impression was one of anti-climax after the magnificence of Siena’s cathedral. Florence is bigger – when it was completed in 1436 after 140 years of construction it was the largest covered space in the world. But the inside of the main section is not even ornately decorated, apart from a few stained glass windows.

Things got much more interesting when we descended into the basement. The building was built over an earlier cathedral dedicated to Saint Reparata, which was founded in the 5th century, but under this is an even older Roman temple with intact sections of tiled flooring, and a list of the citizens who contributed funds to pay for it. It was built against the even older original city wall, which is also visible. Building work on the current cathedral started in 1296, but it wasn’t until 1375 that the old church Santa Reparata was pulled down.

In the photo “Florence Duomo 3” you can see an interesting 24-hour clock, which has a hand that moves counter-clockwise. It is organised so that the hour 0 is always at sunset, which means that every 17 days someone has to climb up a narrow staircase inside the wall and adjust it. It was very important because an hour before sunset the church bells would ring, telling workers that they should hurry home. When the sunset bell rang an hour later the city gates would close, and you would be trapped outside the walls until morning.

The altar area was a lot more interesting than the nave. For a start the huge dome has amazing frescoes which we got to see up close later on when we climbed to the top. The original architect Arnolfo di Cambio confessed that he had no idea how to build a dome that big, but he cunningly died in 1310 and was off the hook. In 1331, the wealthy guild of wool merchants were enlisted to oversee the project, and we saw stained glass sheep in the doors commemorating this. Several other architects were involved over the next decades, but in 1418 there was a competition announced to find someone to design the dome.

The winner was a goldsmith named Filippo Brunelleschi who was evasive about how he intended to proceed. There was not enough wood in the whole of Tuscany to build a scaffold high enough to lift which ended up being nearly 40 thousand tons of brick and stone in the dome. We can see now that there are regular holes around the circumference where logs could be inserted to support platforms for builders to work off. It remains the largest brick dome ever built, and was the largest dome of any kind until the development of modern 20th century building techniques.

We climbed hundreds of spiral stairs to the base of the dome, where we saw some huge clay statues that were originally intended as a temporary facade at the front of the cathedral for an important wedding. They have now been restored for tourists to admire in perpetuity. We were allowed out onto the roof, from where we had a great view of the streets far below. We also had an excellent view of the outside of the dome, with tiny tourists at the top. To give us an idea of the scale of the cathedral, the guide told us that the white, octagonal section with the gold cross on the top of the dome is the height of a six-story building.

Next we climbed up more steep stairways between the inner and outer layers of the dome. Eventually we emerged on the top platform and were rewarded by fantastic views of Florence in every direction. The nearby tower (behind me in the photo) is almost as high, but not quite.

On the way back down, our route took us around a narrow ledge at the base of the dome on the inside. From here we could get a good view of the amazing frescos painted over the entire surface. At the bottom were depictions of hell, with a large figure of Satan eating some unfortunate sinner. The next level up had ordinary people resisting or succumbing to temptation, and on the level above that, wise men presumably ascending into heaven. Above that were angels, and right at the top a rather crowded looking balcony which I guess is where saints get to hang out. The amazing thing about these images is that they start at over 50 meters above the floor, and had to be painted from platforms suspended from the walls. It wasn’t possible to just step back and see the result of your work.

Finally, we entered a room with a display of the wooden winches, capstans, sleds and lifting gear that were used by the builders to get materials into position. It is amazing what they could achieve with 700 year old technology.

Back down at ground level we grabbed an espresso and some water at a cafe, then looked inside the octagonal Baptistery of St. John which is right in front of the main building. It had an impressive gold painted ceiling, but the figures were more cartoon-like than the bigger cathedral dome. This is the only place in the city where people can be baptised, so it is a important part of the lives of Catholics in the city. It used to have gold covered doors, but these are now in the museum for safe-keeping.

3 thoughts on “Return to Florence”