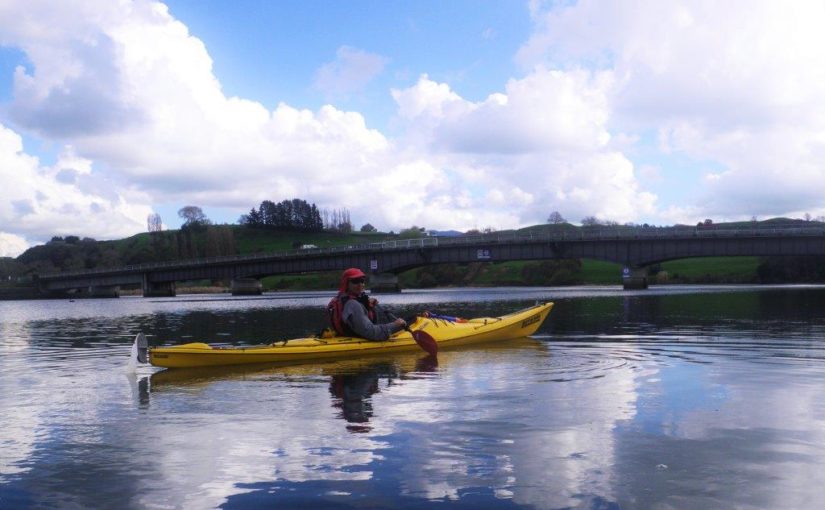 For the first time since our return from Europe we’ve spent a weekend in the motorhome down in the Waikato. Felicity had an appointment at midday Saturday in Hamilton, but we hit the road early on Friday morning, and as usual she worked with her Surface Pro on her lap all the way down the motorway.


We might have been over the Bombays before we discussed a specific destination. It poured with rain for a while as we drove south, but the further we got the better the weather, and since we had the kayaks on the roof, one of the hydro lakes beckoned. We have stayed at Horahora Domain before, but not kayaked from there out onto the central section of Lake Karapiro.

After a detour past our favourite cheese factory in Ruakaka to pick up some delicacies, we stopped at the side of River Rd in Hamilton where there are no houses and ate lunch. We didn’t linger, and by early afternoon we had unloaded the kayaks and paddled out onto the river.

On the eastern side of the Maungatautari Bridge a couple of drowned valleys surrounded by bush made interesting places to explore.

We had just crossed the main channel and turned into the first arm when Felicity’s phone rang and since it was her boss she answered it. She had to confess she wasn’t in the office, but that didn’t seem to be a problem. It was quite a long call, so I paddled around in circles for a while to fill in the time. I took the photo of her (and my thumb) on one pass to see if she was finished, but she was deep in discussion.

As I was passing a narrow sandy beach a stoat walked out into the open and stared at me about two metres away. I tried to get my phone back out for a photo but I wasn’t fast enough. Perhaps I should be wearing a Go-Pro video camera?

One of the valleys was full of drowned trees, and it was fun zig-zaging between their stumps. The lake was formed in 1947, so these trees are 70 years old. As you might imagine, power boats are banned from this area.

We paddled downriver under the road bridge and around some little islands that must once been the tops of small hills before deciding to turn back. There is another low island just in front of the Horahora domain, so we circumnavigated that before pulling up at the shore next to the motorhome.

I went outside to make a phone call before dinner and took a selfie with the tablet while I was there. You can see how close to the river we are.

The kayaks were on the ground ready to launch first thing after breakfast, but it started to rain before we went to bed and didn’t stop until after 11.00am on Saturday. We didn’t care, with the heater running it was very cosy inside reading our books.

As soon as I noticed the rain stop I quickly loaded the kayaks back on the roof so we could set off into town. The flat, grassy area we were parked on was mostly puddles by this time, so I was glad to have 4WD to get back to the seal.

The weather still looked pretty grim after the meeting was finished, so we decided to head to Opal Hot Springs in Matamata, just down the road from Hobbiton. The rain had slowed to a steady drizzle by the time we arrived, which isn’t a problem when you are sitting in 39° water.

On Sunday morning things hadn’t improved, so while we both felt like some exercise by this time, the most sensible thing to do seemed to jump back in the pool for an hour.

When we returned to Hamilton, it seemed like the rain was finally over, so we parked next to the river and walked along the bank as far as we could before returning for lunch. We stopped to see an old friend on the way home, and by 4.00pm I was crawling along the southern motorway at 20 km/hr with the other 300,000 people who traveled south for the weekend and who were also heading back to the big city.

One thought on “Karapiro and Matamata”