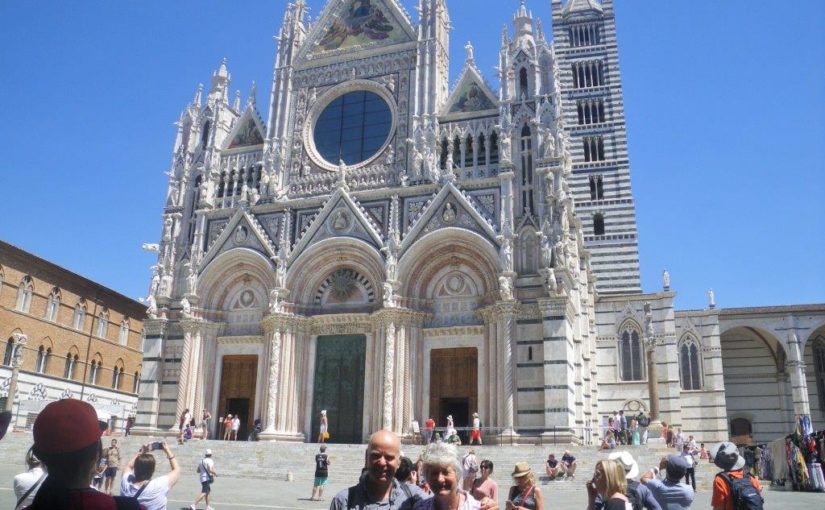 Siena is very similar to the other Tuscan hill towns we have visited recently, just ten times the size. There are many thousands of tourists jamming the narrow streets, which also allow cars, trucks and even buses, not to mention maniac Italians on motor-scooters. It is not a relaxing place.

The Etruscans built a fort here, but the city was not particularly important in Roman days. The symbol of the city is a she-wolf suckling twin boys, a statue of which we have seen in nearly every piazza, but the legend is that while Rome was founded by Romulus, Siena was founded by two sons of Remus after their father was murdered by his brother.

When the Lombards from Germany conquered northern Italy in 568, they moved the main transport routes inland to protect them from Byzantine raids. Siena subsequently became an important trading post and a stopping place for pilgrims heading to Rome on the Via Francigena. In 774, the Lombards were conquered by the French King Charlemagne, and the intermarriage Frankish rulers with Sienese nobility led to the establishment of powerful families. In 1125 feudal rule collapsed, and for the next 400 years Siena was a republic.

The next 225 years were the “golden age”. By 1179 it had a written constitution, and even the middle classes were involved in government. For a while, elected representatives took turns lasting just two months, during which time they could not leave the government buildings, which supposedly prevented corruption. In 1196 they began building a massive cathedral, which was in use by 1215. At the battle of Montaperti in 1260 the Sienese defeated the Florentines, and we saw two huge wooden poles that used to fly the Florentine standards inside the cathedral.

In 1339 work began on doubling the size of the cathedral by building a new nave at right angles to the existing church so that it would be even larger than the one owned by their rival city Florence. But things took a turn for the worse in 1348 when the Black Death arrived and decimated the population. Funds ran low, and the cathedral had to be scaled back to its original size.

In 1555 the Florentines, with the help of the Spanish invaded and that was the end of the republic. From then on Siena was part of the Duchy of Tuscany until the unification of Italy in the 19th century.

We arrived in town yesterday, and spent the early afternoon wandering about looking at impressive buildings and views. Later on we went to a hotel down the road from ours where we could use the swimming pool if we bought a drink at the bar. Drinking beer in the hot sun does not inspire me to action, so it was lucky we had already sussed out a nearby restaurant where we enjoyed a seafood dinner.

This morning we had booked on a walking tour which ended up at the cathedral. We began at the Basilica Cateriniana San Domenico (photo Siena-9), which is just plain brick on the outside, and where photography is forbidden inside. It houses relics of St Catherine, the patron saint of Siena. Although her body is buried in Rome, one finger is on display in a container at a side altar. In a side chapel her entire head, covered with a clay death-mask but with real teeth visible, is the focus of worship for her devotees. All rather macabre for my taste!

Our guide Claudia told us lots of interesting information about this city. She explained that the city has 17 medieval wards, each represented by an animal. There are small signs on the corners of buildings when you pass from one to another. When you are “baptised” into a particular ward you remain a member for life, even if you subsequently move home.

Rivalry between wards is intense, especially during the Palio di Siena which is a traditional horse race run around the Piazza del Campo twice each year, on 2 July and 16 August. Only 10 of the wards can participate, and during this time special coloured lights are displayed in the streets. The race is just three circuits of the shell-shaped piazza, and is over in a couple of minutes.

We passed the oldest bank still in existence (Siena-9). All the public buildings have iron rings in front to tie up horses while you go in to do business.

The cathedral was amazing, both inside and out. Every surface is covered with priceless artwork, even the floors. There are 56 different inlaid marble mosaic panels, although some are covered most of the time to protect them from the tourist hordes. The panel in our photo Siena-6 shows some men climbing the “Hill of Virtue” to find wisdom at the top. The semi-naked woman on the right represents luck (she is holding a cornucopia), but one foot is an a ball and the other is on a boat which is about to drift away…

We saw four statues carved by a young Michelangelo between 1501 and 1504 before he was offered more money to work elsewhere. There are other statues by Donatello and Bernini. A side room called the Piccolomini Library (photo Siena-7), displays illuminated choir books and frescoes painted by an artist named Pinturicchio, based on designs by his teacher Raphael.

Our overall impression was that this is one of the most amazing displays of wealth that we have ever seen. It is hard to imagine any modern institution having the resources to replicate something of this magnitude.

About 7.00 we headed out to find dinner. On the menu we found Tagliatelle with truffles. Since we have been walking past lots of truffles in the local oak forests we thought we better try some. To be honest I was rather underwhelmed. The taste is quite subtle, and it is hard to imagine how dogs and pigs smell them underground.

It was nice and cool when we finished, so we walked back to the central piazza, past the domo and around the edge of the city wall. On the way we managed to get a photo of a light from the dolphin ward.