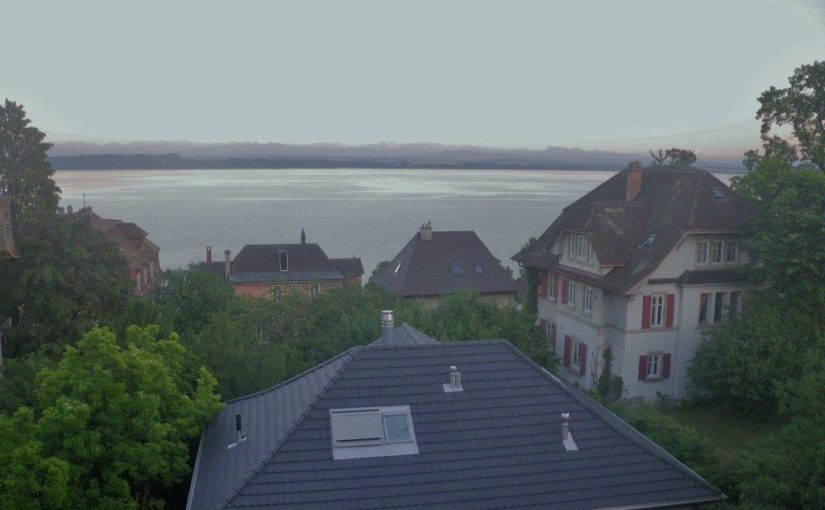 Felicity needed to do some work with our host at the Université de Lausanne this afternoon, so we caught a train after breakfast. The sky was completely clear in the morning, so we had a great view of the mountains across the lake.

When arrived in Lausanne we took the metro for two stops and were outside the town hall at 10 am, just in time to join a walking tour. The two of us were the only customers, so we got lots of attention and were able to ask plenty of questions. One advantage of being on a tour is that our guide had keys to let us see some of the interior rooms of the town hall, which most tourists never visit. We were surprised to learn that a city with only 140,000 citizens has 100 councilors.

The building also has a marriage hall, where everyone comes to get the official registration done before the religious ceremony, which is optional. I was interested to see the locked door of the city archives which needs three members of staff, all with their own key, to unlock it.

The history of Lausanne was also an eye-opener for us. Along with most other European cities, it was ruled by the Romans for many centuries. One of the most important events however, was when it was occupied from 1536 to 1798 by the protestant Bernoise from the canton in the next valley. They booted out the Catholic hierarchy and destroyed many of the statues of saints in the cathedral. Sometimes they contented themselves with just smashing off the noses so that the statues couldn’t breath. They also stole many of the city’s treasures, including some tapestries from the cathedral, and still have not returned them.

One of the local heroes is a guy who mustered a hundred soldiers and went and told the Bernoise authorities that they should leave or he would mount a revolt. They told him they would consider his ultimatum, and naively he went away to wait for their decision. Unsurprisingly, he was promptly arrested and executed. To this day, people from the area around Lausanne have a reputation for being non-demonstrative, which is apparently a hangover from having learned to suppress their true feelings around their oppressors.

Our guide spent quite a lot of time showing us around the cathedral. I was amused to be shown where one of the ribs in the vaulted ceiling was not measured correctly, and had to bend to reach the top of a pillar.

Another unusual feature of this cathedral is that the rose window contains many pagan illustrations, including the signs of the zodiac and symbols for earth, air, fire and water. After the tour we met with Jill and her husband and had lunch up at the university.

Felicity stayed to work, while I was driven back to Neuchatel. Down in front of the house we are staying in is a small beach on the edge of the lake. I walked down and discovered that the water was quite warm, so I went for a long swim around a series of buoys marking off an area that boats are supposed to stay away from. It was fine when I was swimming, but I noticed that if I stopped to look around that the water below 300 mm so was noticeably cooler. I sure hadn’t expected that I would be enjoying swimming at a beach in Switzerland.