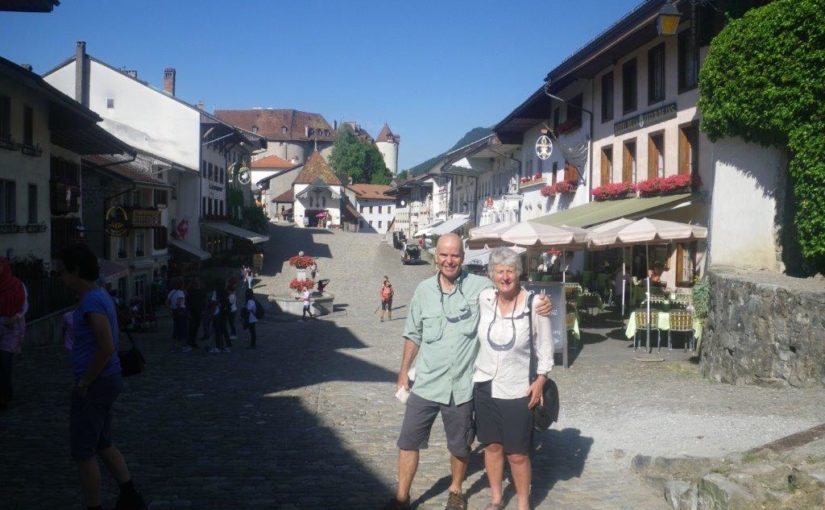 It’s been another blistering hot day here in Switzerland. Felicity and I spent most of the morning working, but about 11.00 am we walked into town to make some purchases at the market. There are lots of melons, berries and stone fruit available, especially cherries which come in about five different varieties.

We walked down to the lake front and admired the vegetables growing in the park. There is a path around the shore, so we followed it and stopped for a swim at the beach. The only slight downside to Swiss “beaches” is that they have stones instead of sand, so getting into the water is somewhat painful. The arched doorway with the set of steps behind it is the way up from the road to where we are staying.

After lunch Jochem drove us to the town of Gruyère where our first stop was the chocolate factory at Maison Cailler. Chocolate first arrive in Europe with Spanish conquistador Hernán Cortés after he conquered the Aztecs. At first it was consumed as a drink, sweetened with sugar, and was popular as an aphrodisiac. The Dominican Catholics tried to get it banned because it supposedly “heated the blood”, but they were unsuccessful.

François-Louis Cailler was a Swiss who learned how to make edible chocolate in Italy, but in 1819 he developed the first smooth chocolate bar which was an immediate success. His son-in-law Daniel Peter figured out how to combine chocolate with his neighbor Henri Nestlé’s condensed milk to make milk chocolate. The Cailler company was purchased by Nestlé in 1929.

Th dioramas included the implication that the Swiss were early adopters of mountain-biking, and that their first factory was actually powered by a bike. I’m a bit skeptical about the historical accuracy of these claims.

When we had finished the history part of the tour we checked out a display of where the raw materials come from. We had little speakers hanging on cords around our necks which told us about each product. We were able to taste the raw coco beans which were quite bitter, and roast hazel nuts and almonds which were delicious.

Next we looked at a mini production line making chocolate covered praline. I was impressed to watch an industrial robot picking all the perfect chocolates off a conveyor belt while cleverly “seeing” any that were imperfect and ignoring them. Unfortunately it was moving too fast to be clearly visible in my photo.

At the end of the production line we were invited to try some of the finished product. Most of the time a smiling staff member was standing there to inhibit greediness, but she was elsewhere when we arrived.

They allowed us to look at he main production lines through a glass window, then the final display allowed us to taste a sample of each of their dozen or so products. I was beginning to feel a bit ill by the end, and was glad to have a cup of coffee in the cafe to remove the sweet taste from my mouth.

Our next stop was at an actual Gruyère cheese factory. We didn’t have time to go on a tour, but were able to look at rows of huge round cheeses maturing in their racks. Another industrial robot was making its way slowly towards us, removing each cheese one at a time, brushing the surface with salted water and turning it over before sliding it back into the rack. We stopped at the shop on the way out and tasted a few cheeses before purchasing some.

Finally, we drove to the top of the ill and visited the castle at Château de Gruyères, which was built in the 13th century. We didn’t have time to look inside, but were able to walk around the perimeter. We stopped in a cafe to have a beer before the hour or so drive home.