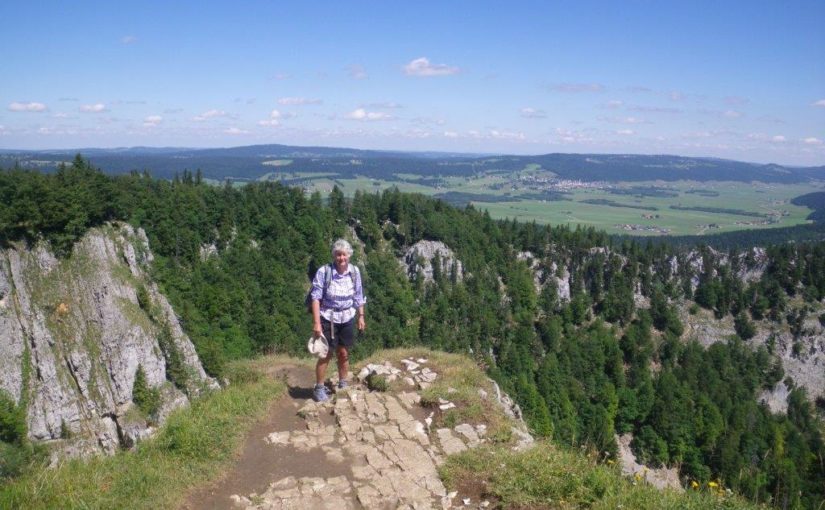 We have been on a real mountain hike today, climbing 750 meters up out of a valley to the top of an amazing cliff, then descending back to the start and a further 100 meters down a gorge. Altogether we have covered over 20 km so we are both feeling rather tired.

The small railway station of Neuchâtel-Serrières is just over a kilometer from where we are staying, and after breakfast we caught a local train from there to the village of Noiraigue at the top of a steep gorge. There were dozens of Swiss people joining us on the 5 hour circuit. Some were families (because it is school holidays), but there were also many groups of retired people that look like they hike up and down steep hills for fun on a regular basis. Everyone we met was very friendly, and we were constantly replying “bonjour” to people coming the other way.

The first two hours was an unrelenting climb, first up a steep forestry road, then from the settlement of Les Oeuillons up a narrow track. One of the interesting things about Swiss hikes is that there are tiny villages everywhere, often with restaurants and accommodation. We were in thick forest all the way up, so didn’t get much of a view, but when we finally emerged from the trees at Creux du Van we got our reward.

We were looking over a giant natural amphitheater, with sheer cliffs dropping 160 meters straight down to the top of the bush-clad slopes below. For the next hour we walked around the edge, sometimes only a few centimeters from instant death. In New Zealand there would be a safety fence for sure, but I guess there are so many cliffs in the Swiss mountains that it would be impractical. There was one or two signs saying “Danger de mort”, but I suspect most people could work that out for themselves.

As we sat and ate our lunch, we could see much higher peaks in the distance, some covered with snow. There was a constant ringing of bells tied around cows’ necks, and I half expected to see pig-tailed Heidi running over the mountain pasture. There were lots of different and unusual alpine flowers to admire.

When we arrived back at Noiraigue about mid-afternoon, we decided to walk a few kilometers of the Gorges de l’Areuse trail. This has a total length of 31 km, but it passes through eight villages where it is possible to jump on a train.

We were fortunate to have picked the most scenic section. The gorge is very narrow for a couple of kilometers, and the track crosses from side to side on narrow bridges. One part is cut into solid rock, so it had a rock overhang above our heads. There were even more people on this trail, including some small children in backpacks.

By the time we reached Champ-du-Moulin we were both knackered and decided it was time to catch the train home, even though the scenery was spectacular. We both wished we had our swimming gear, because the day was hot and there were many inviting pools in the river.

We got off the train at the right station, but somehow missed the path under the railway tracks that led onto our street. Instead we walked half way into town before we recognised the correct route, as if we needed another couple of kilometers walk in the hot sun!

The good news is that when we opened the door to the apartment, our suitcases were sitting inside. We had hoped that the courier would arrive while we were home so that we could make him lug the bags up four flights of stairs, but we were still relieved to have our gear back.