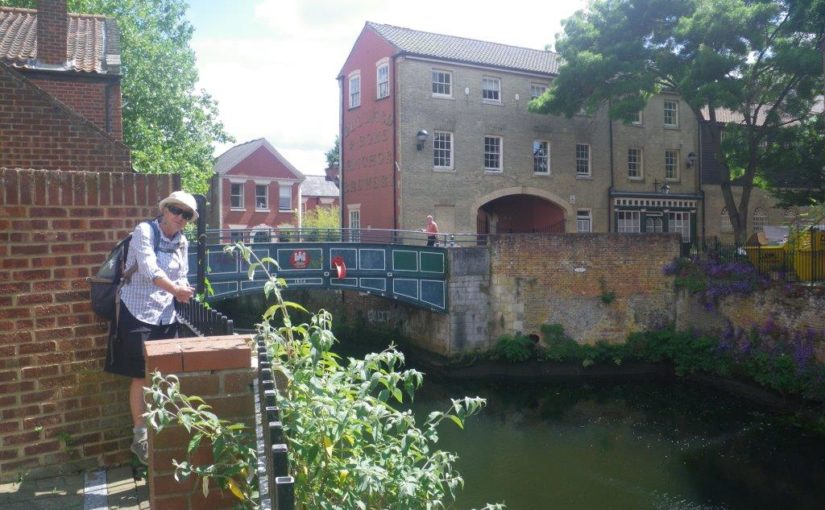 The third of the three inner city walks heads west from the central market. One of the first interesting places was the site of Bethel Hospital, the first provincial mental institution in the country, opened in 1713 with the aim of treating patients rather than just locking them up. It operated until the 1980s, and has since been converted to apartments.


We zig-zaged back and forth through small alleys, past the house where Edward Rigby lived. He founded the Norwich hospital at the end of the 18th century, and introduced vaccination to the city.

We crossed Pottergate, no doubt named after one of my ancestors, then entered St Benedict’s Alley. The area nearby was bombed by the Luftwaffe and is now modern housing, but in a central courtyard the round tower of St Benedict’s Church is still standing, surrounded by wildflowers. It was such a pretty sight that we sat on a bench and ate our sandwiches.

Down St Swithins Alley, we passed another of the six thatched roofed houses left in the city. This was once a pub in the Hampshire Hog Yard.

There is a church every few hundred meters in this part of town, and I found it hard to understand how there could have been enough people to support them all. St Lawrences Church is notable for the carvings over the door depicting St Lawrence and his mate St Edmund being toasted over a fire by marauding Vikings. It was not a good angle for a photo unfortunately.

On a set of steps down toward Anchor Quay we stoped to admire Gybson’s Conduit. He was a 16th century brewer who purchased the rights to use an existing parish well. Part of the condition of sale was that he would provide free public access to water via a conduit, and he created an elaborate structure with a royal coat of arms celebrating the visit of Queen Elizabeth to the city in 1578. There was a large brewery nearby until 1968.

St Miles Bridge is the oldest iron bridge in Norwich, and dates from 1804. The red spout in the middle of my photo was used by firefighters to lower their hoses into the river so that they could pump out water. There is a little white mark on the brick wall to the right of the bridge which marks the highest recorded flood level.

At the church of St Mary Coslany, it looks like there is a moat around the building. This is because the surrounding churchyard became so full of burials that they had to add new layers, raising the level of the ground way above the foundations.

The next notable church was St Miles. This has amazing stonework that uses limestone to decorate the common knapped flint, and is apparently one of the finest examples of this work in England. When we went to look inside, we discovered the church is now used by a circus to train performers, and we had an interesting conversation with a young woman who offered us a lesson. We did not take up her offer.

We crossed the river again, and after walking up an alley that passes under St Gregorys Church, we stopped to look inside. It is now a antique/junk shop, filled with all kinds of treasures. I was interested to see one of the first mobile car phones made by British Telecom back in the 1980s – it must have weighed about 10 Kg! It was more like a concrete block size than a brick. St Gregorys also has a 15th century painting of St George slaying the dragon. I have seen bigger crocodiles than this dragon – it must have grown larger as the story was told over the centuries.

The final photo is of Lower Goat lane. This is believed to have once been part of a Roman road across the city, as it has been paved for 2000 years.