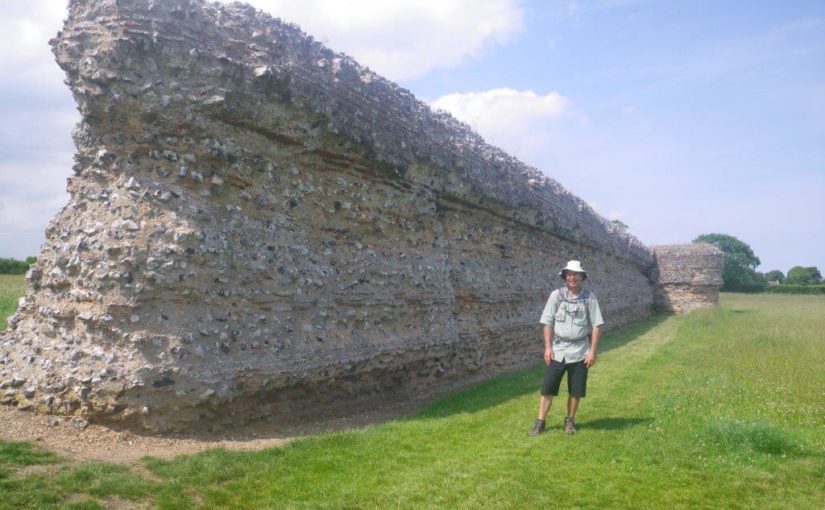 When I looked for places to visit near Great Yarmouth, the first place that caught my attention was Burgh Castle. It isn’t actually a castle, but instead a Roman coastal fort that they called Gariannonum.


The guide suggested we could walk from Yarmouth via the Angles Way long-distance path along the southern shore of Breydon Water, and promised “a very enjoyable walk”. It turned out to be marginally less boring than the walk into Yarmouth on the Northern side of the estuary but I think it was a bit over-sold.

After an hour or so we were hungry, so we found a “beach” at the edge of the mud and sat on a tiny patch of cleanish shell bank to eat our lunch. Many years ago there used to be people living on houseboats in this area catching smelt, which I presume are similar to what we call whitebait. No sign of them now though.

There was a bit of birdlife to watch, but no crabs scuttling across the mud and no splashes of mullet or other fish as I would expect in a NZ estuary.

When we finally arrived at the fort we were immediately impressed. This is probably the largest Roman building still existing in the UK. Three of the four defensive walls are still standing, and many of the round projecting bastions from which defending soldiers could fire arrows at anyone trying to attack.

The fort was built around 300 AD, and only used for about a century before the Romans retreated from this part of their empire. The walls were built with alternate layers of flint and brick, and the insides were plastered smooth. There is no trace of internal buildings, which may have been made of wood.

An inscription on a tile and the remains of a cavalry helmet indicate that a mounted unit from the Germany, the Equites Stablesiani, was based here in 395 AD. There was space for about a thousand foot soldiers, or 500 cavalry and their horses. The settlement extended far beyond the walls, but little trace remains.

In the intervening years there has been a Norman castle on the site, and an Anglo-Saxon monastery.

I was interested to read that sea levels were considerably higher 2000 years ago, and that the fort was then situated on the edge of a deep harbour. As the climate cooled the sea retreated and the harbours along this coast silted up and turned to marshland and swamp.

The view through the trees is where the river Waveney joins the Yare, with the Berney Arms mill in the background. Somewhere out in the marsh beyond is the Berney Arms station where we failed to catch a train on the Wherryman’s Way walk, and the line of trees on the far horizon is where the coastline used to be in Roman times.

On our way back to the road we checked out the Church of St Peter and Paul, the oldest sections of which were built around 940 AD. It seems to be still in use today.

We had had enough of walking along stopbanks, so we caught a bus back to Yarmouth. This town has obviously seen better days, although we might come back to explore one day. It is marketed as a beach resort to local tourists, but it looks like they spend most of their time on fun-fair rides and sitting in pubs. We considered walking out to the beach, but it was starting to rain slightly so we returned to the station and caught a train home.