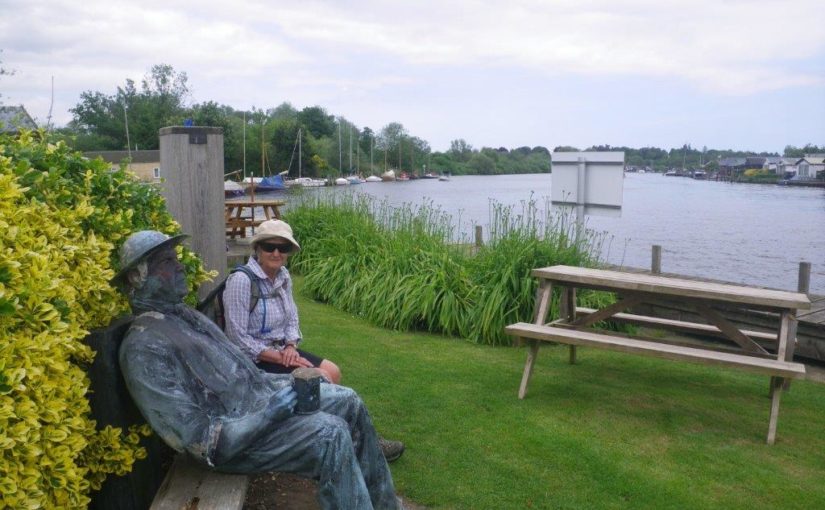 Travelling by bus to Surlingham from Norwich took us about 10 minutes, which was a lot easier than the almost two hour trip on foot in the other direction last week. For the first part of our walk we were sharing the path with about a dozen other people in a group which was a bit frustrating because every time we stopped to look at anything they would pass us then block the track when we got going again. Eventually they turned off and we could walk at our normal pace.


The Wherryman’s Way led us inland after the site of the old Surlingham Ferry, cutting off a loop in the river. We met the Yare briefly again at Coldham Hall, where we saw a statue of an actual wherryman. There was an audio recording of an old man who remembered seeing them, which was activated when I turned a small crank handle. Apparently they were very friendly as long as you kept out of their way when they were working. Pleasure boats had to take particular care, because the heavy, solidly built wherrys would destroy anything foolish enough to stray into their path.

After Coldham the path again headed inland away from the water. This area is mostly farmland, so we passed crops of wheat, potatoes and yellow flowered mustard and rape.

At the village of Rockland there was a staithe (wharf) with pleasure boats at the end of a narrow channel leading out through Rockland Broad to the river. We sat on a bench and ate our lunch, watching the English boaters enjoying the sunshine. Later we saw a flash launch cruising by with the occupants drinking champagne and eating strawberries.

We stopped at a bird hide and got out our binoculars, mostly because you are supposed to be able to see “The Slaughters”, which are the remains of about a dozen old abandoned wherries. There were a few dark shapes sticking out of the water in the distance, but I couldn’t identify anything that looked like a boat. I did watch a pair of birds (maybe magpies) harassing a hawk of some kind.

This section of the walk had numerous brown and orange butterflies, and some iridescent blue dragonflies. There are supposed to be otters as well, but they kept themselves well hidden. We walked alongside the river for a while, then again headed inland through farmland.

At Langley Abbey we stopped to look at the ruins, only to discover that the site is in private ownership and was being prepared for a wedding. In recent times some of the buildings have been repaired, without destroying the character of the place. We talked to a very friendly groundsman who let us look around the outside and found us a booklet describing the history.

The abbey was founded in 1195, but after the dissolution of the monasteries by Henry VIII in 1536 it was abandoned, and the site used for agricultural purposes. We were intrigued to see the walls of one barn were made of wattle and daub (clay), but this was yet to be repaired. I asked if there were still tradesmen who knew how to do this, and we were told that there are but you have to book them years in advance. Even roof thatchers take a year or so before they arrive on the job.

The next stretch of the Way ran along the stopbank on the edge of the river for a considerable distance. We were coming to the open section of the Broads and the trees became scarce. The paddocks were mostly grass with cows grazing, and we saw several small, wild deer bounding away from us as we approached.

On the other side of the river at this point is a huge factory for making sugar from beets. It was built by the Dutch in 1912, but failed to make money and closed a few years later. After the First World War in 1920 it became impossible to import sugar from Europe, so the English Beet Sugar Corporation was founded and the factory reopened. In the last decade there has been significant expansion, so it must be profitable. It is strange to see a huge industrial plant way out in the wop-wops like this.

We stopped for a look at the Hardley Drainage Mill, which was built in 1874, and operated until it was replaced by an electric pump in 1950. In 1991 a team of volunteers began restoration work, and by 2009 the sails were turning. The internal machinery was repaired over the next few years, and in 2013 it began pumping water again after 50 years. Sadly it was not operating during our visit.

When we reached Hardley Staithe we decided we had walked far enough for one day, so we left the Wherryman’s Way and walked up the road towards Chedgrave. At the top of the hill we stopped to look at St Margaret’s Church which was built in the 12th century and seems to be still in use.

Asking locals about the bus got us several conflicting stories, and while we were in the local White Horse pub ordering a coffee a bus sped past. Fortunately the next one was in 20 minutes, so we were happy to sit at the bus stop and wait.