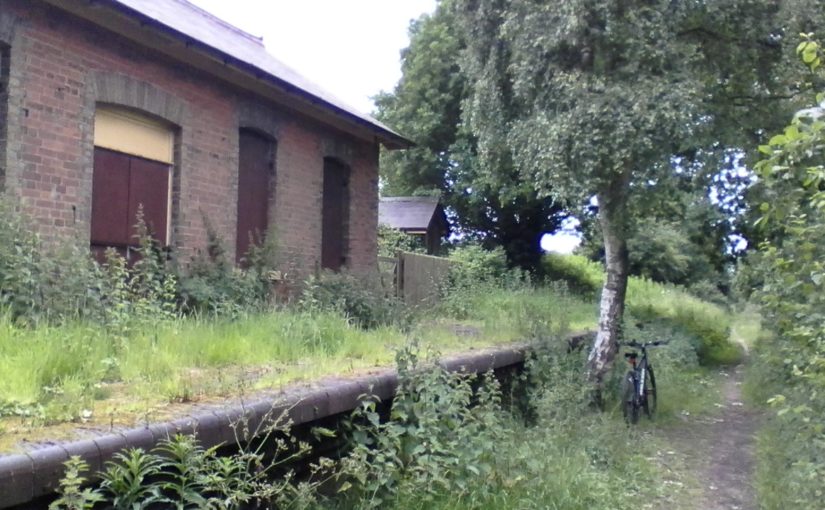 Most of the 98km Weavers’ Way from Cromer to Great Yarmouth is for walking only, but bikes are allowed on two sections, one of which runs between North Walsham and Aylsham for 10km. Since Felicity was at the university all day today I hired a bike and caught the train north.


The Weavers’ Way commemorates the fact that in the 14th century King Edward III encouraged Flemish weavers to settle in the area so that cloth could be made locally instead of having to export raw wool to Europe. Just south of Walsham is the village of Worsted, which was the centre of this industry. The weavers were from what is now Northern Belgium, spoke Dutch, and as protestants were being persecuted by the catholic Spanish.

I made the suggested detour into the centre of North Walsham to see the famous Market Cross, erected in 1602. The way to the Market Place was well signposted, so I had no trouble getting there even though a one-way road system led me in a big circle.

I thought I had it figured out where to go next, but I have now done enough navigating in the northern hemisphere to mistrust my sense of direction, and sure enough when I checked on Google Maps I was on the wrong side of town. I haven’t yet decided if it is the position of the sun (in the south), or if I am tuned into the earth’s gravitational field somehow, but all I can say is thank goodness for technology!

On the way back to the station I rode down Grammar School Rd, and passed Paston College which was founded in 1606 and attended by Horatio Nelson. As I was riding down Station Rd I noticed an old gate overgrown with trees, and just beyond that a carpark at the start of Weavers’ Way.

Because it follows the route of a disused railway line, the Way was flat and mostly straight. I rode past fields with all kinds of crops, then through a wood of pine trees, although not the radiata variety that we see in NZ.

At Felmingham Cutting, a notice informed me that I was passing through a butterfly nature reserve and that I might see up to 16 species. I kept a careful count, but my score was only one. I might have been a bit distracted by the rest of the notice that advised me not to disturb any adders that I might see. As these little snakes are quite poisonous this seemed like a good plan. Sadly, the adders were not out and about during my visit.

At the end of the cutting I stopped to take a photo of Felmingham station, which was abandoned in 1959 when the line was closed. Most of the plants on the edge of the track are stinging nettles, and now more than six hours later my knuckles and ankles are somewhat painful, even after a thorough shower.

The route passed under several bridges, then suddenly diverted onto a country lane. I could see where the railway used to run, but now it is someone’s front lawn, and a sign made it clear that it is private property. A few meters down the lane another sign sent me down a very rough grass path beside a field which ended on a busy highway.

On the other side of the road I found a gate which took me back onto the railway’s old alignment. Not much further on I rode under another brick bridge (which is just visible on the very far left of my photo), then on to a green steel bridge over the River Bure. I stopped for a while and looked carefully for the otters and water voles which live near the water, and for the owls which glide over the water meadows hunting. But no luck.

When I reached the Blicking Road it was time to leave the Weavers’ Way and head into the village of Aylsham. Although the area has been inhabited since prehistoric times, the town itself was founded around 500 AD by an Anglo Saxon called Aegel. “Ham” means settlement. The Domesday book records around 1000 people living here in 1086.

The village sign depicts John of Gaunt, who was lord of the manor from 1372, when Aylsham was the main town of the Duchy of Lancaster. They reckon that the central part of the town has changed so little that people from the middle ages would still be able to find their way around.

The thatched building in the middle of the road is a water pump built in 1911, so pretty modern compared to the rest of the town. The small spire on top of the 13th century church of St Michael and All Angels’ 30 metre tower is a landmark that can be seen for miles around. In the Market Place, the Black Boys Inn has been there since 1650. I took a photo of an empty “Clarkes of Aylsham” shop because the entire front is made of cast iron.

On the south side of town, I found the Bure Valley Path next to the 15 inch gauge railway leading back east towards Wroxham. I passed this point a couple of weeks ago when I rode up Marriot’s Way from Norwich. Just as I was about to set off, one of the toy steam trains arrived with a dozen or so tourists.

This 15km path back to Wroxham follows the railway the entire way, which meant I had a fence right next to me on one side or another. I only saw one other train, when I was sitting beside a village pond on a bench having a rest.

Wroxham is right on the river Bure, and one of the main centres for boating in the Norfolk Broads so it was filled with visitors. I rode around some of the pretty waterside paths, but I was staring to get a bit sore after more than three hours riding, so soon decided it had stopped being fun.

I returned to the station and it wasn’t long before a train came and took me back to Norwich.

6 thoughts on “North Walsham to Wroxham via Aylsham”