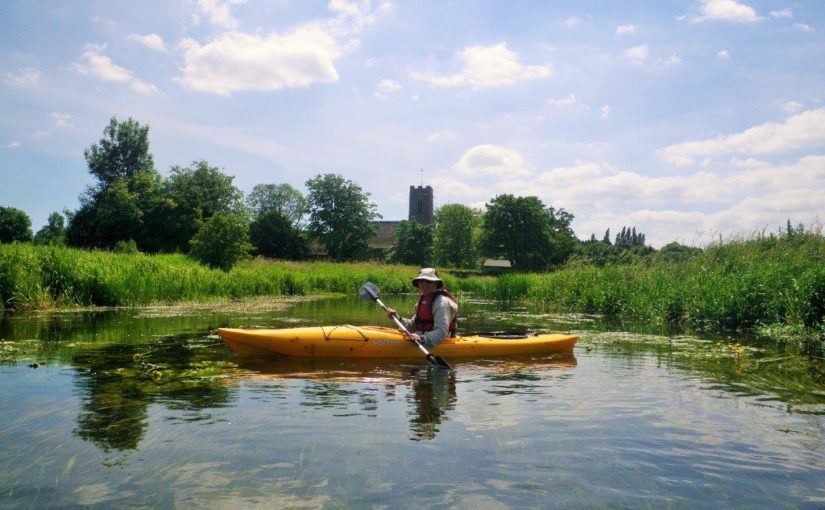 When I first learned we were coming to Norwich, the thing I wanted to do most was to kayak on the Norfolk Broads. A bit of research taught us that the best place for small boats is on the rivers, higher up than drunken tourists can drive their huge rented launches.


When Felicity phoned the CanoeMan to ask about hiring kayaks, he advised us that the best full day trip is 27 kilometers of the River Bure from Aylsham to Coltishall. We were waiting at his base in Wroxham at 9.30 when the shop opened, and after half an hour or so of form filling and me buying some new sunglasses we jumped in his van and were driven to the start at Aylsham.

The put-in was about 200 metres south of where I looked over the Weaver’s Way bridge yesterday, just off Millgate. There wasn’t actually quite enough water at the bottom of the muddy ramp, so we had to drag the kayaks another 50 metres till the river was deep enough. We had to bypass the old mill pond and race, which took us into a “cut” where boats once unloaded at the staith (wharf).

Vast amounts of money were spent in the 1770s to make the Bure navigable all the way to Aylsham, which required five locks to raise boats up to higher levels. Problems with silting occurred within months, and the waterway required constant dredging. In 1880 the railways began taking business away, and when a huge flood damaged the locks in 1912 navigation was abandoned.

After paddling for a few hundred meters we came to a low weir that our instructions advised us could be slid down in most water conditions. We both managed it without tipping out.

The next few kilometers were through water meadows, mostly out in the open, with only an occasional grove of trees and families of swans to make things interesting. Eventually we passed a village, which barely rates a name of its own – Burgh next Aylsham. Just beyond this was our first portage at Burg Mills. The main river is diverted through the mill race, and now that the locks are gone we had to drag the kayaks up the bank and 50 meters over the grass to the sluice where we could get back in.

A couple more kilometers further and a square church tower loomed up through the trees. This is opposite the town of Brampton, soon after which we came to Oxnead Mill and another 75 meter portage. We had been paddling for almost two hours by this time, so before launching again we sat on the grass and ate our lunch. As we were leaving, I took a photo of the brick walls which are all that remains of the old lock.

By now there were quite a few trees along the river bank, so there was more to look at. The river bent around in a big curve, and after a while we came to another church on the bank, this time near the town of Buxton. The portage at Buxton mill was quite long – we had to drag the boats a couple of hundred meters along a mown strip behind a hedge, carry them one-by-one across a busy road, then drag another few hundred meters down a drive, through a fence and into a wide drain leading back to the Bure.

We probably put the kayaks in the water a bit early, because we soon came to another weir that was made from rocks and lumps of concrete. Felicity got stuck on top for a while, and it took both of us rocking her back and forwards before she dropped over into the clear water. I backed up quite a way and paddled as fast as I could so that my momentum carried me over the barrier. On the downstream side we saw several big trout.

The next 5 km were probably the prettiest of the trip, which was just as well because we were both getting tired by this time. There were trees growing right on the banks, and there was plenty of shade from the hot sun.

When we came to the Coltishall Bridge, I saw what looked like a shop beside the road, and I thought it might be good for morale to stop and buy an ice cream. We parked right under the bridge, and I scrambled up the bank and climbed over the fence. At first I thought I might have made a tragic mistake, because the shop seemed to be the factory outlet for Halls Famous Haggis, which wasn’t quite what I had in mind for a snack.

In the opposite direction across the bridge was the town, with a gas station, so all was well. I was walking back across the bridge behind an elderly gent and when Felicity gave a big smile he said he thought she was coming on to him until he realised I was right behind him. I told him he would need to be bringing ice cream to get that kind of reaction.

We had only just started paddling again when we came to a floating barrier blocking the river before Horstead Mill. There was a wooden ramp this time, and another wooden ramp leading back in just past the old lock less than 30 meters away. This part of the river is accessible to big boats, but it was less than a couple of kilometers before we came to the Rising Sun Pub, where we had been told to leave the kayaks chained to a railing. It took us a while to find the padlock, but eventually we were able to unload and put on our dry clothes.

It was a bit over an hour’s walk back to the station at Wroxham where we could catch our train back to Norwich. The road would have been more direct, but rather dangerous, so we detoured up a country lane to the north until we came to the Bure Valley Railway path, where I had ridden the day before. Although we were tired, it was quite nice to stretch our legs after spending most of the day sitting in a kayak.

As the station came in sight I noticed that there were quite a few people on the platform, suggesting that the train was due immanently. We had to walk the length of the platform, down a path to the road, and under a bridge to get on the right side of the tracks. Just as we were starting up the ramp we saw the train coming, so we had to run the last hundred meters or so. The trains are usually about an hour apart, so it was a good thing we made it.