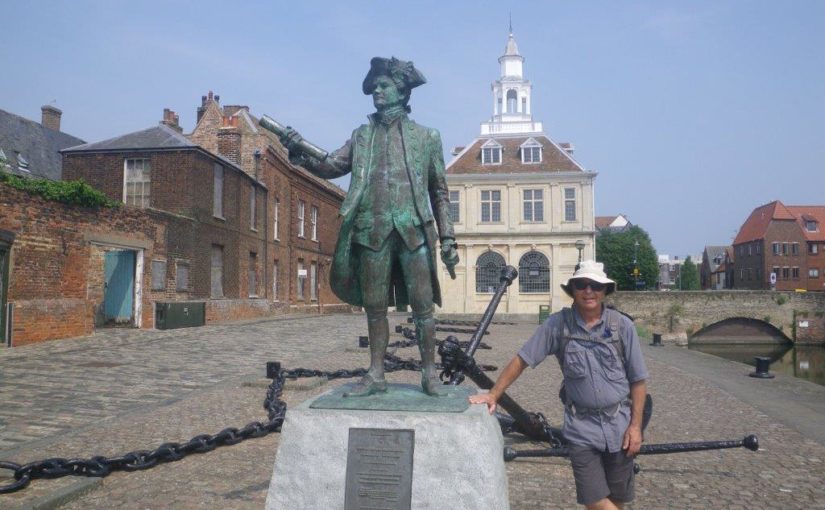 Up in the north-west corner of Norfolk is the town of King’s Lynn, which in the 14th century was Britain’s most important port. Until about 1100 it was known just as Lynn, which some locals still call it today. For the next few hundred years it was called Bishop’s Lynn, then after Henry VIII the official name became King’s Lynn.


The port was preeminent in the middle ages because the town was a member of the Hanseatic League, a confederation of merchant guilds and coastal towns stretching from the North Sea to the Baltic which dominated maritime trade until the 19th century. Although the Hanseatic cities had their own legal system and armies, it was not an organisation of countries like the modern European Union. Because they promoted free trade it’s members became fantastically wealthy.

Because the main transport links are to London in the south, we actually had to leave Norfolk and change trains in Ely, so by the time we arrived it was almost lunchtime. Near the station is a 17 hectare park area called “The Walks”, developed in the 18th century so that people (at least the upper classes) could stroll among trees and shrubs away from the smells and the smoke of the town.

In the 15th Century, the Red Mount Chapel was built as a stop for pilgrims on their way to visit the shrine of Our Lady of Walshingham, which had grown to be the most popular holy site in England following an appearance by the Virgin Mary in 1061. Unfortunately it is only open on Wednesdays and weekends, so we could only see outside.

After passing by a remaining section of the old city wall, we left the park and checked out a beautiful Edwardian public library, one of 3,000 around the world financed by Scottish-American industrialist Andrew Carnegie. Behind it, Greyfriars Tower is the remains of a Fransiscan Priory built around 1230, which survived the Reformation because it was a landmark for ships sailing into port.

The Trinity Guildhall now has a fascinating museum displaying some of the town’s treasures. It also has the 1307 Red Register, which is the oldest complete paper book in English. Until then, most records were on parchment, but someone in the council decided to invest in the new-fangled paper technology and imported a big load from Europe. The complex includes what used to be the town gaol in the basement, and the old town hall and council chamber upstairs. I was interested to see section of pipe from the 16th century town water supply – it was made from hollowed out elm wood!

Down on the waterfront there was not much evidence of what must have once been a bustling quay, but we were able to visit the 16th century Marriott’s Warehouse with it’s display of the town’s old buildings inside, and a modern artwork out the front depicting a rack of drying fish.

Just around the corner, the 1475 Hanse House is the only surviving Hanseatic Business headquarters in England. On the roof it has wooden structures that once would have had pulleys and ropes to hoist goods to the second story warehouse.

The photo of the river shows the only boat in port, but there is a little dot on the horizon marking another vessel heading in from “The Wash”. I tried to catch a picture of England’s oldest passenger ferry, but it is hiding behind the bigger boat and Felicity was complaining about the sun in her eyes.

In the photo at the top of the page, I’m standing in front of the old custom house, next to a modern statue of George Vancouver, a Royal Navy captain and explorer born in King’s Lynn who went on to leave his name in several far-flung places throughout the world. Including NZ’s sixth highest mountain near Mt Cook I’ve just learned.

Our final stop was at St Nicholas’ Chapel, which was first built around 1150 by the first Bishop of Norwich. We were immediately impressed by the ornate wooden west doors, which fit neatly into the surrounding stonework. The red and green colour scheme is based on traces of original paint that were discovered during restoration. All along the wooden roof are a series of carved angels, most of them carrying musical instruments.

There was a lot more to see in this town than we expected, and we had to miss many more sights because we were tired and faced a long trip home. It seems strange that this small town (population now around 50,000) once played such an important role in this country’s history.