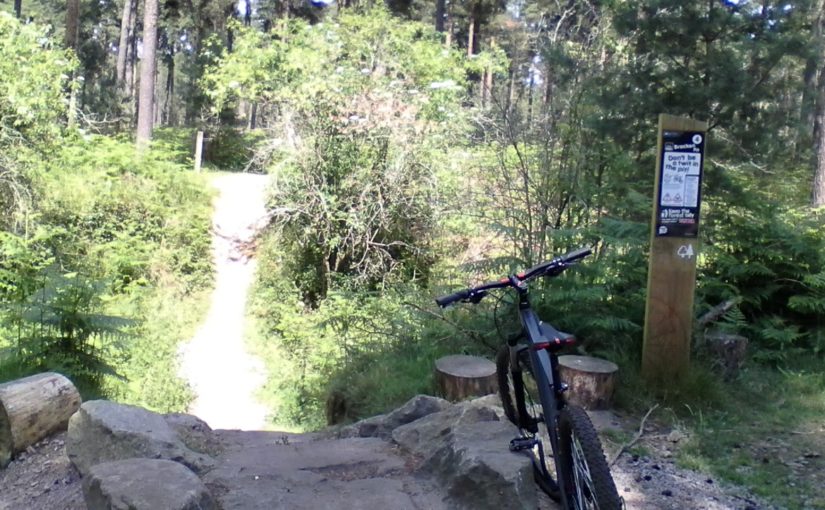 Last Saturday night we were invited to dinner by one of Felicity’s colleagues, and he turned out to be an even more fanatical mountain biker than me. Not only does he have a basement full of bikes, and more in a shed somewhere, but he’s even building himself a new bike in the hallway outside the bathroom! I took the opportunity to inquire about the location of the best single-track in the area.

So this morning I found myself heading for Thetford Forest. The town itself is a 40 minute train ride from Norwich, and since I was on the 9.00 am express for London it was almost booked out with business people commuting to work. I had to then walk into the middle of town to the bus station, where I discovered I had 20 mins to wait for the next one going the right direction.

There was an underpass right next to the bus stop, with a sign pointing towards the “Thetford Priory”, so I walked under to check it out. This was once one of the most important monasteries in East Anglia and was built in the 12th century. Thetford was one of the last priories to be dissolved, because for 400 years it was the burial place of the Earls and Dukes of Norfolk, and enjoyed their protection. The ruins are supposed to be haunted, but on a bright summer’s morning there was no sign of supernatural activity.

The bus had driven about 15 minutes up the road when I saw a sign pointing to the Forest Park, just as we turned off. That explained why the driver looked at me blankly when I told him I was going the “The Lodge”, according to Google’s instructions. He stopped and let me out straight away thank goodness, so I only faced about 25 minutes walk up the side of a narrow highway with no footpaths and fairly heavy traffic.

At the gate I still had another 20 minutes walk to get to the bike hire shop at High Lodge in the centre of the forest, but this bit was very pleasant with a wide grass verge and only occasional vehicles. I hired a bike and set off around the Beater Trail to “warm up” as I was advised by the young man in the bike shop.

The trail is very flat, so it wasn’t too tiring, but as the temperature was over 30° today it didn’t take long before I was extremely hot. Some of the trail is under the trees, but big sections are out in the open. I chose the long option, which meant that it was almost 1.00 pm by the time I got back to the start and found a bench to eat my lunch on.

Lime Burner Trail is a little bit more challenging, particularly because there are several large bomb pits which give advanced riders the option of riding down the steep side and back up again. In WW2 there was a big airbase near here, and bombers which had to turn back for various reasons would jettison their loads in the forest before landing. In January this year an unexploded 500lb bomb was found and detonated by the army.

When I signed up for the hire bike I had to give my address, and the two guys in the bike shop said “we live just down the road from you, we knock off at 5.00 and can give you a lift if you want.” Even though I had had enough riding by mid-afternoon (mainly due to a sore rear), I decided to lie in the shade under a tree and read my book rather than the walk out of forest, find bus stop, wait, walk to train station, wait, walk home from station alternative.

So now I feel like I have experienced a pretty good variety of Norfolk off-road bike trails. My next ride will probably be in Prague.