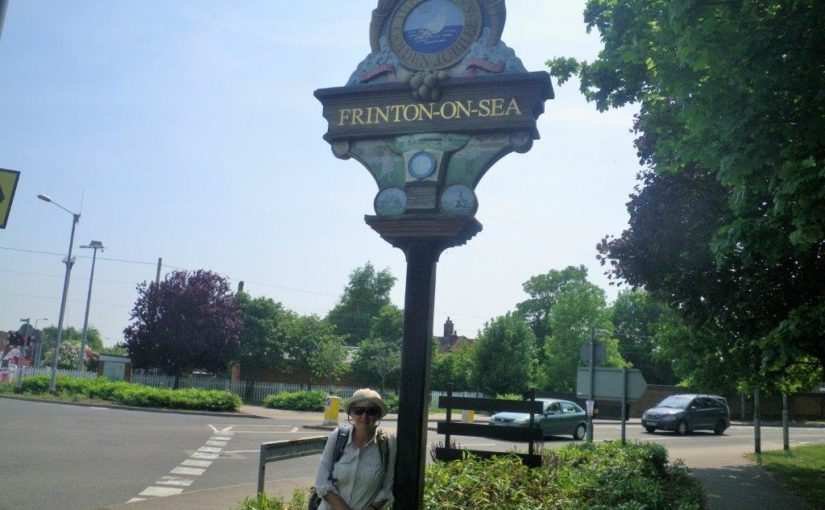 Today we left Norfolk and visited a beach resort in Essex, mainly because it is somewhere Felicity’s mother used to go for holidays when she was a child. Frinton was just a tiny village until the 1800s when it was developed as an upper-class resort for people who didn’t want to mix with the hoi polloi.

Unlike the other beaches we have visited, there are no fairground rides, gaming machines, fish & chip shops or even ice-cream stands along the shore. The town didn’t even have a pub until 2000! Instead there is a broad green park along the low cliff top, and a retail-free promenade along the bottom.

On the way Felicity looked at attractions in the area, and discovered that the next beach to the north, Walton-on-the-Naze, has a tower that tourists can climb up and get good views up and down the coast. This seemed like a good idea to me, partly because I like towers and partly because I wanted to find out what a Naze is. So as not to keep you in suspense, I will reveal that it means “nose”, or headland.

The first thing we noticed when we arrived on the coast was a huge pier extending 790 meters out into the sea. It is the third longest in the country. The original pier dates from 1830, one of the earliest built. We walked past all the amusement rides and stalls and out to the end where we found a bench to eat our lunch.

We walked north up the coast on to the headland and climbed a steep spiral staircase inside the tower to the viewing platform 26 meters above the ground. The Naze Tower was built in 1720 as a landmark for shipping, but was only opened to the public after refurbishment in 2000.

The sky was a bit hazy, but we could just make out the Principality of Sealand on the horizon through our binoculars. This “micronation” was formed in 1967, based on an abandoned WW2 sea fort 12 km off the coast, but has not yet been officially recognised by any other country.

Just up the coast to the north we had a good view of the twin ports of Harwich and Felixstowe. The former is mostly for passengers, but Felixstowe is the UK’s largest container port. We were just about to climb down again when we noticed a great “green roof” on the information center far below. It must be a challenge keeping plants alive in such an exposed area.

As we headed back to towards Walton, a local bus came by and we caught it to Frinton, saving a long walk in the hot sun. On the way out to the beach we stopped to look at the St Mary the Virgin church, the only ancient building in town and one of the smallest churches in England.

Felicity’s mother used to tell a story about walking back from the beach across the green and a Tiger Moth that had been towing an advertisement for Capstan Cigarettes landed in front of her. The pilot offered her a ride, and much to the horror of her friend she accepted. When they arrived home the friend immediately blurted out: “Guess what Marie did!”, leading to her getting punished by her concerned parents. The wide grassy area looked just as Felicity had always imagined.

The original developers insisted on high quality housing throughout the town, but some of this was destroyed by the last air raid by the Luftwaffe in 1944. Sadly, some time around the 1970s a couple of high-rise apartment blocks were built right near the sea front in an act of architectural vandalism.

Although it didn’t seem quite as hot today as it has been the previous few days, so we decided to have a swim seeing as how we were at Essex’s best beach. There was a flash, modern toilet block where we went to get changed, but when Felicity asked the attendant for some change so we could each put 20p in the turnstile, he told us that a few hundred meters walk away was a free toilet block that had the benefit of showers. Clearly his wage isn’t dependent on the takings.

The sea was quite pleasant, if a little murky, so we felt quite refreshed after our swim and shower. When we arrived at the station the next train was heading to its final destination at Walton where it would turn back, so we briefly visited a second time before riding back to the main line at Colchester where we could catch an express back to Norwich.