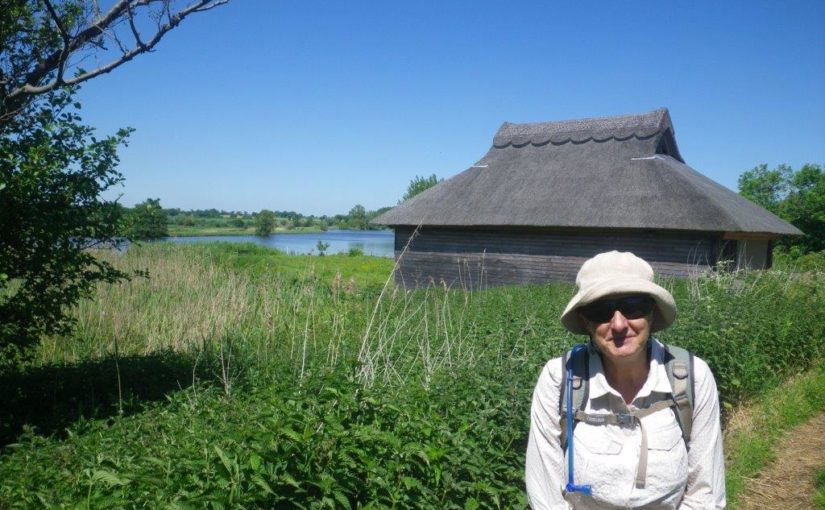 After my big mission yesterday I was hoping for an easy day exploring the city, but Felicity was keen to start walking one of the long-distant trails leading out towards the coast, so we spent another exhausting day of touristing. Wherries were barges with large black sails, used to transport goods up rivers to inland towns, and played an important part in the history of Norwich.


We didn’t get going until late morning, so most of our walk was in the hot part of the day. It was only supposed to have got up to 23 degrees, but it felt hotter than that to me. Some of the time we were in the shade of trees, but other sections were out in the open so I drank most of the two liters of water I was carrying.

Some of the maps we found online were very pretty, but all of then rather vague about the actual location of the path. Very poor signage mean that we spent a bit of time walking in circles, especially in the beginning where the way runs along city streets. There were just enough signs to encourage us not to quit, but not enough that we were always confident we were going the right way.

It wasn’t until we came to Whitlingham Country Park that we got our first sight of the Norfolk Broads, which is Britain’s largest protected wetlands. The Broads are a network of shallow freshwater lakes, formed by the flooding of medieval peat diggings and gravel quarries.

Although the water looked clean and quite inviting, there were prominent “no swimming” signs at every spot where it was easy to get in and out. Some of the signs re-enforced this with “deep water” and even “underwater suction”. The banks were often lined with pretty yellow irises, and other wild flowers bloomed under the trees.

When the way left the edge of the Broad to bypass a sewerage treatment plant, we walked beside fields of onions, mustard and wheat.

We stopped for lunch at Bramerton Woods End, which used to a popular picnic spot for picnickers who traveled by boat from Norwich. There were dozens of flash boats moored along the banks here, and a few cruised past as we ate.

About 2.00pm we arrived at the Surlingham Church. There has been a church here for over a thousand years – the village was listed as Sutherlingaham in the 1086 Domesday Book. I’m not sure when the tower was built, but it is believed the unusual octagonal top was added in the 14th century. We spent some time looking inside, then headed up the road to the village.

Felicity was feeling a bit crook with a stomach ache by this time, so we decided to cut our walk short and head for home. We asked several people about buses, and received conflicting information, but when I finally read a timetable near the village pond we saw that the next bus wouldn’t arrive for a couple of hours. So we decided to walk back along the road, which took us most of the time we would have sat waiting.

Altogether we walked about 24km, so by the time we arrived home my feet were starting to get sore from the hard pavement. Felicity jumped straight into bed and slept for the next 12 hours!