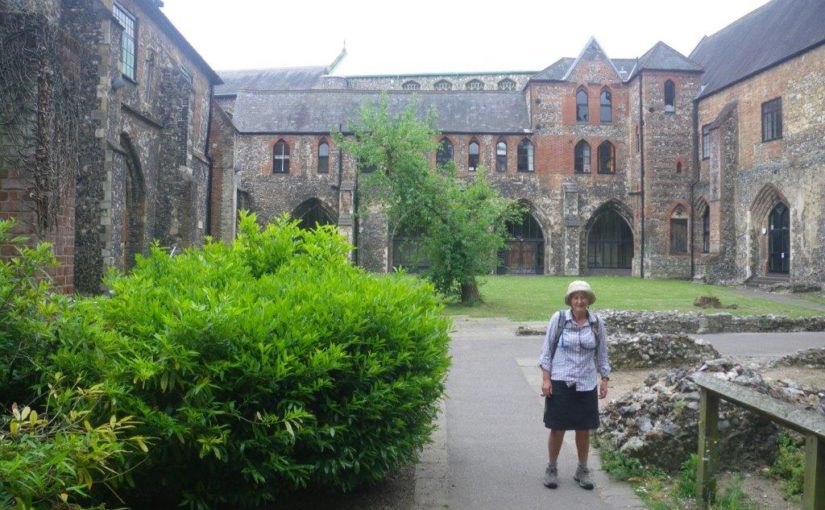 The Norwich City Council has published a booklet describing three walking routes titled Norwich’s nooks and crannies. Today we walked the first of these, which is a 3.5km loop to the north east of the city market.


On the way there we stopped at Chapelfield Gardens to see if there were any tickets left for Norwich Festival events. One called VR Playground was just setting up for the day, so we were first in the queue. We had to sit on a swing wearing virtual reality goggles and headphones, then start swinging to make the show start. The VR Goggles have a Samsung smartphone inside, and another phone is mounted under the seat to track the amount of momentum. I have never tried this before, so I was pretty keen. The effect was more than I expected, and I had to cling on to the swing’s chains tightly to avoid falling into the (virtual) abyss below me. I had two turns, the first as a jellyfish rising up through the ocean, and the second as a shuttlecock leaping across tall buildings through a city.

It took a little while to find the start of our walk, but once we were on our way it was mostly straightforward. The guide encouraged us to explore down dozens of little alleyways and winding roads. There are 31 medieval churches within the city walls, but only 8 of them are still in use by worshipers. We visited several of them, and were treated to an organ recital in the magnificent Cathedral.

We were hungry by the time we returned to the market, so we enjoyed an African sweet-potato, bean and peanut dish then shared a bowl of mushy peas with mint sauce which was surprisingly good.

On the way home we explored Norwich Castle, which was built by the Norman conquerors soon after they arrived in 1066. In latter years it became the city prison, until 1887 when it was bought by the city council and converted into a museum. It was interesting to learn about the waves of European invaders who turned up at regular intervals to become part of the local population. There was also a display about the warrior Queen Bodica who tried to fight the Romans, with tragic results.

One thing we have noticed about Norwich is that it is one of the “whitest” populations we have ever seen. Th castle had a bunch of Asian tourists, but in the streets it is rare to see a brown face. I’m a bit surprised there are not more international tourists, given the incredible history at every turn.