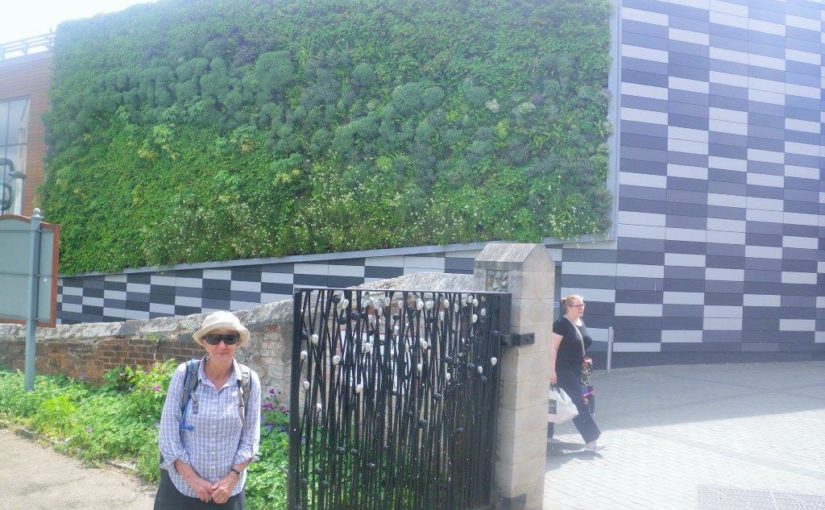 The second Nooks & Crannies walk goes to the south of the market, and is 2.5km in length. It starts at the Royal Arcade, which was opened in 1899 and is considered an Art Nouveau masterpiece. The glass tiling and mahogany shopfronts have been described as a ‘fragment of the Arabian nights’.


Inside we saw a large store which used to be the Colman’s Mustard Shop. This famous brand was first produced in Norwich 200 years ago, and explains why we saw so many fields of mustard plants growing along the Wherrymans Way a couple of days ago.

We walked through the grounds of the castle, over a modern underground shopping mall, which has been built right up against the castle walls. Glass topped ventilation shafts set unobtrusively next to the paths provide light to the area below.

Dragon Hall on the edge of the Wensum river was built in the 15th century by a rich merchant. Boats could dock alongside, and the building was used as his showroom and warehouse.

Up an alley opposite we came to St Julian’s Church. This has a shrine to Julian of Norwich, a female mystic who had a series of religious visions in 1373. Her 1393 book “Revelations of Divine Love” is believed to be the oldest surviving writing in English by a woman. She became a religious recluse in the church, and supposedly never left her cell, preaching to visitors out of the window. The “cell” seemed fairly luxurious to us, although the church was re-built after being bombed in WW2 so it may have been more austere back in the day. There was no en-suite, so we wondered how she managed ablutions. We passed up the opportunity to buy a 30p candle which you can leave burning at the shrine.

Through another couple of alleys we came to two of the six remaining thatched roof buildings in the city. One used to be a pub known as the Barking Dickey. It was officially called the Light Horseman, but a badly painted sign looked more like a braying donkey to the locals.

After some more twists and turns we entered St Stephens Churchyard. The gates display stones commemorating the fact that Stephen became the Christian church’s first martyr after being stoned to death. Nearby we found the most impressive green “living wall” that I have ever seen.

It was about mid-day by the time we arrived back at the market square, so we walked along the riverside walkway to the Great Hospital. It was opened in 1249 to care for elderly priests, scholars and the poor. It is still in use as a rest home today.

We were mostly there to attend another festival event. Called “Rear View”, it is a performance by a female poet asking the question: “If at 65 you could say something to yourself at 23, what would it be?” The show began as a life-drawing class, with all of us in a classroom standing in front of easels with a pencil and paper. Lying about the room were a number of fairly competent sketches of female nudes, which was a bit intimidating, despite the instructor reassuring us that we were just making lines on paper. I wondered if the model was about to get her gear off, but she didn’t.

After about ten minutes we were loaded onto a double-decker bus with most of the roof cut off and tiered seats facing backwards. The bus drove around the city, stopping here and there for segments of the performance. We were wearing headphones playing rather soporific music while we traveled, and these allowed us to hear the poet speaking and singing from the road outside. She was transported by car to each spot so that she was there when we arrived. It was a very innovative piece of theater and we both enjoyed it.

On the way home we walked past the cathedral, and noticed a bunch of people with telescopes trained on the top of the steeple. A man told us that there was a peregrine falcon nest up there, and that we could see a fluffy white chick inside via a web-cam.

We headed home for a short break and coffee, stopping off Sainsbury’s on the way to buy some haddock for dinner.

Then it was back into town to see our final festival event – a circus/gymnastic show by five Australians in the Adnams Spiegletent. The two women and three men (one of whom looked more Samoan than Australian), put on an energetic and impressive performance. We have been lucky to see three very different shows, as the festival finished this weekend.